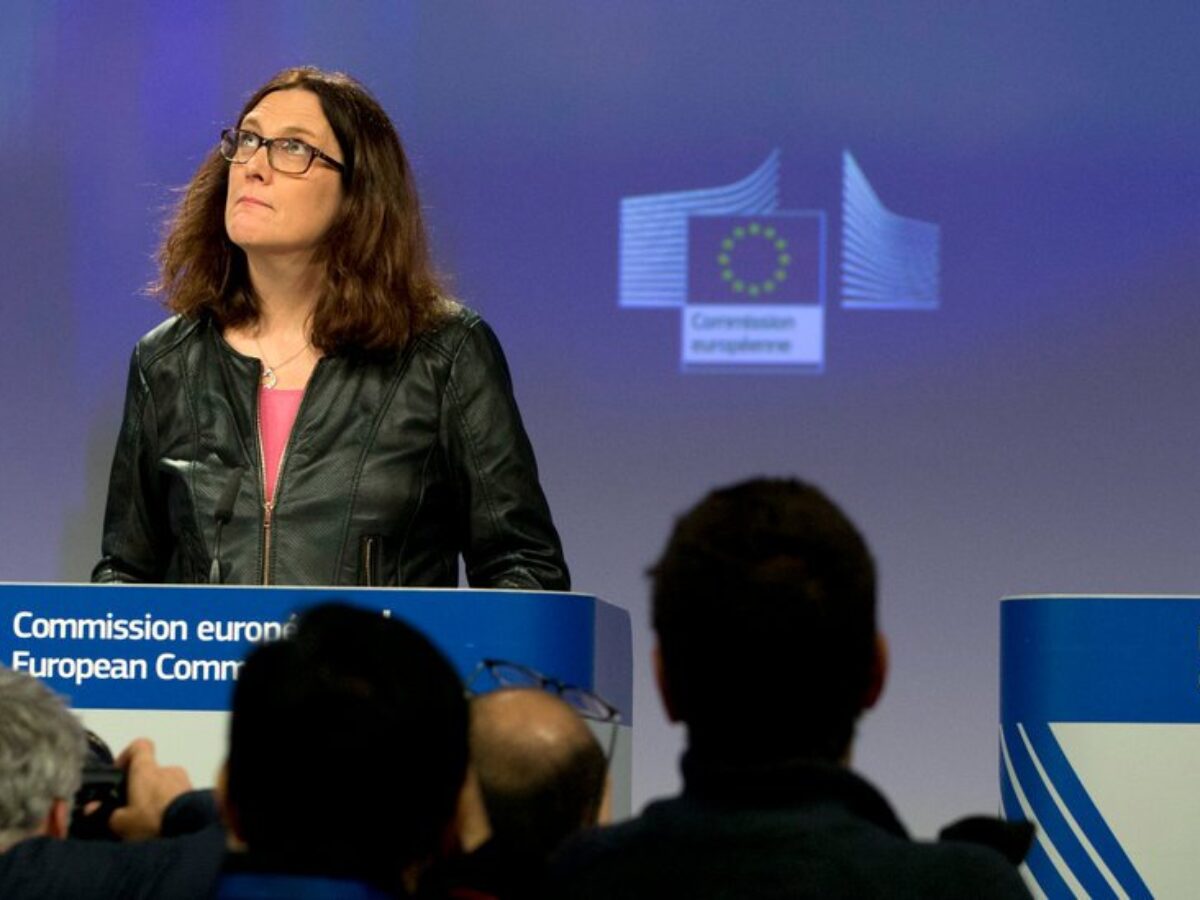 European Union officials unveiled an array of tariffs on Wednesday that they would place on American-made goods if the United States followed through on President Trump’s plan to impose penalties on imported steel and aluminum, raising the specter of a trade war.

The announcement in Brussels was the latest rebuke to Mr. Trump’s proposed tariffs, which have met with consternation domestically and with threats of retaliation abroad. The president’s top economic adviser, Gary D. Cohn, said on Tuesday that he was resigning, a move widely believed to be linked to the trade plan, which he had lobbied against. Republican leaders, including Paul D. Ryan, the House speaker, have also railed against the tariffs.

Internationally, the plan for the new American tariffs — blanket penalties of 25 percent on imported steel and of 10 percent on aluminum — have drawn concern from allies including Britain and Canada, as well as from rivals like China. The European Union had warned of retaliatory charges last week, and outlined those plans on Wednesday.

Such a move by the United States would “put thousands of European jobs in jeopardy, and it has to be met by a firm and proportionate response,” Cecilia Malmstrom, the European Union commissioner for trade, said at a news conference in Brussels. European officials have been meeting with their counterparts in Washington, urging them to revisit the plans, she added.

If the American tariffs are put in place, Ms. Malmstrom said, Brussels could take three steps: It could take the case to the World Trade Organization, add safeguards to protect the European Union against steel diverted from the United States, and impose tariffs on a series of American-made goods.

A provisional list of items being targeted ranges from steel to T-shirts, also including bed linen, chewing tobacco, cranberries and orange juice, among other products. The overall size of the business affected is relatively small, worth about 2.8 billion euros, or $3.5 billion, in imports, paling in comparison with the nearly €250 billion of goods the 28-nation bloc bought from the United States in 2016.

European leaders were quick to stress that they did not want to trigger a wider trade dispute, with Donald Tusk, the president of the European Council, saying in a tweet that trade wars were “bad and easy to lose,” a reference to an earlier tweet by Mr. Trump in which he claimed they were “good and easy to win.”

Officials elsewhere have also tried to cool tensions. Christine Lagarde, the head of the International Monetary Fund, warned in an interview on French radio that in a trade war, “nobody wins, one generally finds losers on both sides.”

But it reflects concern in Europe over the possible impact of new American tariffs, notably on steel. The United States is the world’s largest importer of steel, and while many of Mr. Trump’s arguments have focused on cheap steel from countries like China, the European Union as a whole is the single biggest exporter of steel to the United States. At the same time, the region is concerned that cheap steel that had been destined for the United States could now flood the Continent, putting significant pressure on European producers.

President Trump’s push for tariffs is driven by his fixation on trade deficits. But most economists do not worry about trade deficits, and disagree with the president’s characterization of them.

While retaliation from Brussels appears limited for now, it could have an impact on American domestic politics. Bourbon, one of the products that European officials have targeted, is made in Kentucky, the home state of Mitch McConnell, the Senate majority leader. Other items that could face tariffs are motorcycles, and the corporate headquarters of Harley-Davidson are in Wisconsin, Mr. Ryan’s state.

“The Europeans have rights, too, to retaliate,” said Peter Chase, a former American diplomat who is now a senior fellow at the German Marshall Fund in Brussels focusing on trade. “The E.U. is concerned that behind it all, there are people in the U.S. administration that don’t care that there might be damage to the international system of rule of law that we have created.”

The list, which was leaked on Monday and has been referred to by the European Commission president, Jean-Claude Juncker, is subject to the agreement of the bloc’s 28 member states.

It highlights how sharply the outlook on trade between the United States and Europe has shifted. Since 2013, Washington and Brussels have been negotiating a vast trade deal, known as the Trans-Atlantic Trade and Investment Partnership.

By late 2016, however, those talks appeared to have reached a stalemate, and Mr. Trump’s withdrawal from a similar pact with Pacific Rim countries early in his presidency signaled the death of the European agreement, as well.

The steel and aluminum tariffs have triggered a strong reaction, with business executives and political leaders voicing opposition.

The strong negative reaction to Mr. Trump’s planned tariffs appears to have had little impact on the president, who insisted this week that he would not back down.

On Tuesday, Mr. Trump singled out the European Union, which he said had “not treated us very well, and it’s been a very, very unfair trade situation.” The president warnedthat the United States would also consider raising its tariffs on cars made within the bloc if the European Union were to retaliate.

While he left the door open for compromise with allies, tensions are rising in Europe.

“We’ve loaded the guns,” said Charles de Lusignan, a spokesman for the European Steel Association, a lobbying group, “and we’re ready to use them in case the aggression comes.”