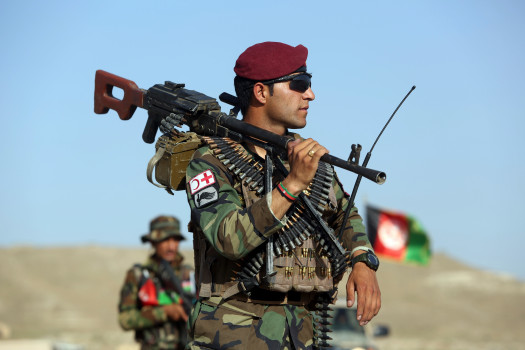 An Afghan army general has been arrested by police for trafficking around 19 kilograms (41 pounds) of heroin powder, officials said today.
Brigadier General Abdul Samad Habib, the head of the recruitment division for the Afghan army in northern Balkh province was taken into custody in Baghlan province yesterday, as he attempted to smuggle illegal drugs in his vehicle, defence ministry spokesman Dawlat Waziri told AFP.
“I confirm he is in custody, and is accused of trafficking heroin,” Waziri said.
A spokesman for police in Baghlan province said that two other military personnel, a driver and another soldier, were also detained along with the brigadier general.
“He was planning to get the heroin to Nangarhar province near the border with Pakistan and then smuggle it out of the country,” Ahmad Jawed Basharat told AFP.
Despite a decade of costly multi-billion US and international counter-narcotics programmes, Afghanistan remains the world’s largest producer of opium, which is refined to produce heroin.
Production has increased 7 per cent over the past year, thanks in part to an ongoing Taliban insurgency and lack of government control in remote areas, according to the United Nations Office on Drugs and Crime.
Addiction levels have also soared — from almost nothing under the 1996-2001 Taliban regime — to around 1.4 million addicts in 2014, according to a survey conducted jointly by the Afghan health ministry and US state department.