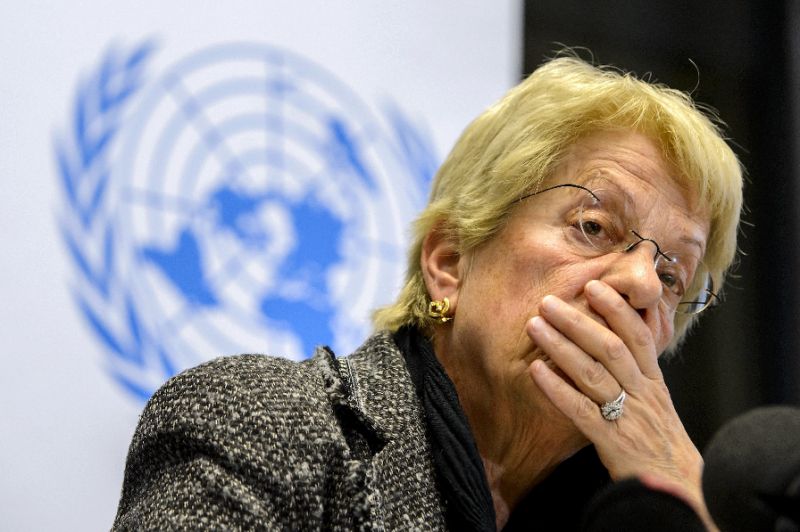 She has served on the UN Commission of Inquiry on Syria for nearly five years.

Ms Del Ponte, a former Swiss attorney general, made her name probing war crimes in Rwanda and the ex-Yugoslavia.

“I am frustrated, I give up,” Ms Del Ponte told the Swiss newspaper Blick. “I have written my letter of resignation and will send it in the next few days”.

She added that “everyone in Syria is on the bad side. The [Bashar al-] Assad government has perpetrated horrible crimes against humanity and used chemical weapons. And the opposition is now made up of extremists and terrorists”.

Later, she told a panel discussion at the Locarno Film Festival: “I am quitting this commission, which is not backed by any political will.

“I have no power as long as the [UN] Security Council does nothing. There is no justice for Syria.”

The brief of the commission is to investigate human rights violations and war crimes in Syria since the conflict began in March 2011.

It has released about a dozen reports but investigators have never gained access to Syria itself, instead relying on interviews, photos, medical records and other documents.

Ms Del Ponte says she has never seen such crimes before, not in the former Yugoslavia or Rwanda.

She and the other commission members have repeatedly called on the Security Council to refer the situation in Syria to the International Criminal Court.

In a statement, the commission thanked Ms Del Ponte for her contributions to its work “and for her personal efforts and interventions to support the cause of justice”.

It wished her well “in all her future endeavours, particularly as a tireless advocate for the cause of accountability and bringing perpetrators of war crimes and crimes against humanity to justice”.