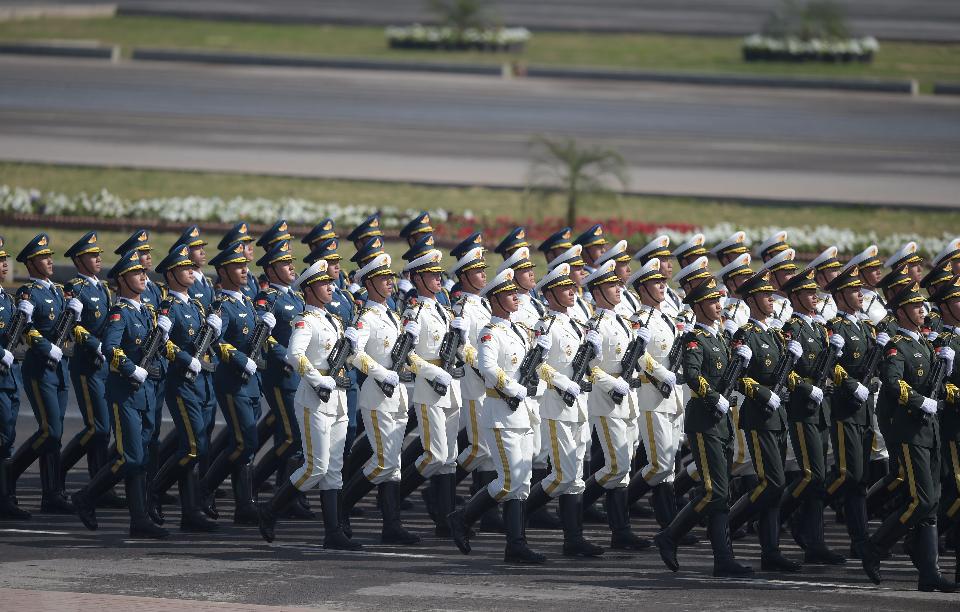 A 90-member delegation from the People’s Liberation Army of China took part in Pakistan’s annual Republic Day events Thursday not just as a routine diplomatic gesture. The PLA honor guard contingent marked China’s first participation in the Middle Eastern country’s landmark political holiday. It showed the world how close the two Asian neighbors have become and how China suddenly wants everyone else to know.

Q: What do they both have in common?

A: A passion to squelch India.

Military cooperation between China and Pakistan is growing, and becoming more ostentatious, because they’re unabashedly teaming up against the world’s second most populous country.

Resistance has been building for decades. China disputes two tracts of land along the Indian border, with each side controlling one. Lots of Indian troops are stationed near both, and their military ranks fourth strongest in the world, one notch down from China’s. Pakistan and India separately dispute control over the Jammu and Kashmir region between them. Actual control is split, and thousands have died in related skirmishes over the past 70 years.

“The traditional role Pakistan has played for China is as a counterbalance and distraction for India, keeping it tied up on its western border and pinned back in South Asia,” says Andrew Small, senior transatlantic fellow with the Asia program under research and grant-making organization the German Marshall Fund. “China has helped to provide Pakistan with the capabilities it needs to play that role effectively, from very basic kit to ballistic missiles and nuclear technology. That…has arguably grown more important to China as India rises and U.S.-India ties deepen.”

Pakistan befriended China by recognizing it diplomatically in the relatively early year of 1950. The honor guard’s appearance last week caps off decades of reciprocity. In the 1960s it began providing Pakistan with “major military, technical, and economic assistance, including the transfer of sensitive nuclear technology and equipment,” according to the think tank Council on Foreign Relations. Add to that medium-range ballistic missiles. China became the top arms supplier after the U.S. imposed sanctions on Pakistan in 1990. A Pakistani ambassador to Washington once called his country a “low-cost secondary deterrent to India.”

Indians see Chinese support for Pakistan as a “key aspect of Beijing’s perceived policy of ‘encirclement’ or constraint of India as a means of preventing or delaying New Delhi’s ability to challenge Beijing’s region-wide influence,” according to a U.S. Congressional Research Service report in 2009. India grew closer militarily to the United States after 2000, culminating in an August 2016 agreement to step up military exchanges plus cooperation on defense technology. U.S. officials hope to use India’s position and size to hold off China and buffer its interests in the Middle East, according to the Eastasiaforum.org research group.

China’s PLA may have picked an appearance on Pakistan’s Republic Day last week with India in mind, at least symbolically. On March 23, 1940, Pakistanis passed a resolution to demand separation for Muslims living under the British Indian empire. Seven years later India and Pakistan were divided.

“Pakistan is unambiguously China’s closest military partner, but the two sides have tended to be somewhat discreet about it,” Small says. “In the last couple of years, there has been much more willingness on China’s part to publicly ‘own’ this element of their relationship.”