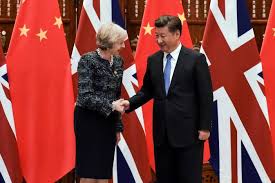 China has invited British Prime Minister Theresa May to attend a major summit in May on its “One Belt, One Road” initiative to build a new Silk Road, diplomatic sources told Reuters. One Beijing-based diplomatic source, with direct knowledge of the invite list, told Reuters that May was among the leaders who had been invited.

“China is choosing the countries it sees as friends and who will be most influential in promoting ‘One Belt, One Road’,” said the source, speaking on condition of anonymity. Two other diplomatic sources confirmed May was on the invite list. “One Belt, One Road” is Chinese President Xi Jinping‘s landmark program to invest billions of dollars in infrastructure projects including railways, ports and power grids across Asia, Africa and Europe. Earlier, aides said May would visit China this year to discuss trade ties.