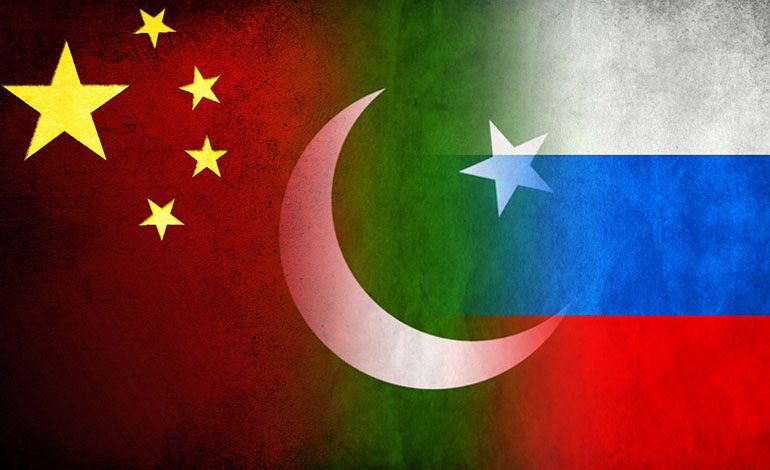 China and Russia have assured Pakistan at the diplomatic level that they would veto any US move in the United Nations to slap economic sanctions on Islamabad, Daily Express has learnt from credible sources.

The roller-coaster relations between Washington and Islamabad have frayed since President Donald Trump last month unveiled a new Afghan policy and hit out at Islamabad, accusing it of giving ‘safe haven to agents of chaos’ by harbouring the Afghan Taliban and other militants.

The United States has already begun conditioning future aid to Pakistan on progress Islamabad makes in tackling the Haqqani Network militants. It has also hinted at imposing sanctions on Pakistani officials allegedly having links with militants.

However, Premier Shahid Khaqan Abbasi warned the US on Monday that any targeted sanctions by Washington against Pakistani officials would not help US counter-terrorism efforts. “We are fighting the war against terror, anything that degrades our effort will only hurt the US effort,” he said in an interview with Reuters.

Islamabad-based diplomatic sources told Daily Express that foreign policy wizards, security officials and top government functionaries have been brainstorming since the unveiling of Trump’s strategy in an effort to chart out new policy vis-à-vis Washington.

It has been decided that Pakistan would phase out its dependence on the United States. And high-level contacts with Washington would be restored only after the Trump administration acquiesced to assuage Pakistan’s legit concerns on the new US strategy for Afghanistan and beyond.

For future dealings, the United States would be asked to stop its relentless ‘do-more mantra’ and maintain ties with Pakistan on the basis of sovereign equality, sources say.

There has been no top level contact between Trump’s aides and Pakistani officials since the inauguration of the new US strategy, though US Ambassador David Hale has met senior Pakistani civil and military leaders in an attempt to soothe frayed tempers in Islamabad.

According to sources, the Trump administration has conveyed through diplomatic channels that Washington wants to resolve all contentious issues with Pakistan through dialogue in order to further strengthen bilateral relations.

However, Pakistan has made it clear that bilateral ties could be strengthened only if the US gave up its consistent policy of pressing Pakistan to do more in the fight against terrorism.

Islamabad has also reiterated its willingness to continue playing its role for a peaceful Afghanistan and to fight the menace of terrorism, but it would never allow the Afghan conflict to spill into Pakistan.

Pakistan has started approaching key international and regional players to garner their support in the wake of scathing criticism from President Trump. In this context, Foreign Minister Khawaja Asif has already launched a diplomatic offensive on the instructions of Premier Abbasi.

Pakistan has been in contact with two veto-wielding powers – China and Russia – who have opposed the American policy of putting undue pressure on Pakistan. The two key world players have assured Islamabad of every possible support at all forums. Pakistan would also approach other Western nations, especially France and the United Kingdom, to drive home its viewpoint.