China urges Trump: be our friend, not our enemy 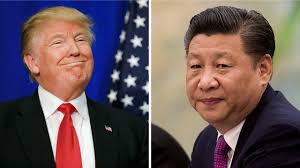 Beijing and state media strike a conciliatory tone amid fears the new president could set the countries on a collision course.

China has urged Donald Trump to be its friend not its enemy, amid fears the tycoon’s inauguration could set the world’s two largest economies on a calamitous collision course.

Since his shock election last November Trump has repeatedly put Beijing’s nose out of joint, challenging it over the militarization of the South China Sea, alleged currency manipulation and North Korea and threatening to up-end relations by offering greater political recognition to Taiwan.

The billionaire has also handed jobs to several stridently anti-China voices including one academic who has described its rulers as a cabal of despicable, parasitic, brutal, brass-knuckled, crass, callous, amoral, ruthless totalitarians.

But on the eve of Trump’s swearing in, China’s government and state-run media struck a conciliatory tone with the man about to become the United States’ 45th president.

“Both sides should try to be friends and partners, rather than opponents or enemies,” Hua Chunying, a spokesperson for China’s foreign ministry, told reporters.

The Global Times, a Communist party-run tabloid, toned down its usually pugnacious rhetoric, telling readers it hoped the most “singular” president in US history would build a “better world” and “show a sense of responsibility that matches his power”.

“The Trump team should project an aura of humility,” the newspaper advised in an editorial. “The US system advocates an assertive political style, but inner modesty is essential.”

However, the English-language China Daily took a parting shot at the president-elect, dismissing his team’s “war-like rhetoric” on trade relations with Beijing. “All the trade war threat to China is just the bluffing of a paper tiger,” it said.

Scholars on both sides of the Pacific say they are alarmed at the potential for US-China relations to break down if Trump continues to raise Beijing’s hackles over sensitive issues such as Taiwan.

“I guess you could say I’m despondent,” said Andrew Nathan, a Columbia University expert in Chinese politics and foreign policy.

“I’m feeling very bad; not knowing where it is headed or if it makes any sense or [if Trump is] just following emotions wherever they lead … It makes me very worried about the China relationship.”

Susan Shirk, a China specialist who served as deputy assistant secretary of state under Bill Clinton, said she feared Trump had already anointed Beijing as the US’ “number two enemy” after Islamic State.

“I don’t think we ought to prettify the US-China relationship in its current state. It’s got some real problems… But there are other ways of solving these problems than the kind of radical approach that Trump seems to be pursuing,” said Shirk, now head of the 21st century China centre at the University of California, San Diego.

“It’s really a mistake to completely give up on any form of cooperation with China and to see China as already an enemy,” she added.

“I don’t think he understands how much clout China now has economically and how much damage China could do to our interests and to those of our friends and allies if we provoke it unnecessarily.”

“If a trade war breaks out between China and the US, it will also be catastrophic for the US,” warned Wang Jianmin, a Taiwan expert from the Chinese Academy of Social Sciences.

For all those fears there are still some who hope the deal-making president could still manage to strike up a mutually beneficial friendship with Beijing.

“Nothing he has done suggests that will happen,” said Orville Schell, the director of the Centre on US-China relations at New York’s Asia Society. “And yet it is completely possible because he is such a contradictory person.”