Cooperation with Russia becomes central to Trump strategy in Syria 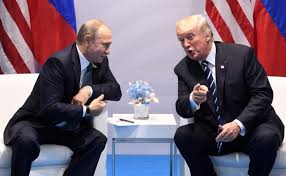 Cooperation with Russia is becoming a central part of the Trump administration’s counter-Islamic State strategy in Syria, with U.S. military planners counting on Moscow to try to prevent Syrian government forces and their allies on the ground from interfering in coalition-backed operations against the militants.

Syria’s once-separate conflicts have moved into close proximity on the battlefield. Part of the plan essentially carves up Syria into no-go zones for each of the players — President Bashar al-Assad’s fight, with Russian and Iranian help, against rebels seeking to overthrow him, and the U.S.-led coalition’s war to destroy the Islamic State.

Some lawmakers and White House officials have expressed concern that the strategy is shortsighted, gives the long-term advantage in Syria to Russia, Iran and Assad, and ultimately leaves the door open for a vanquished Islamic State to reestablish itself.

Critics also say that neither Russia nor Iran can be trusted to adhere to any deal, and that the result will be a continuation of the civil war whose negotiated end the administration has also set as a goal.

U.S.-Russia negotiations are continuing even as Congress moves this week toward imposing additional sanctions on Russia and Iran. Elements of the strategy were presented in members-only briefings last week to the House and the Senate by Defense Secretary Jim Mattis, Joint Chiefs of Staff Chairman Joseph F. Dunford Jr. and Secretary of State Rex Tillerson.

The administration has made no secret of what it has called its “ISIS first” strategy, setting the defeat of the militants as its top priority, after which other elements of Syria’s long-term stability are to be addressed. ISIS is an acronym for the Islamic State.

In the most significant change from his predecessor, President Trump turned over to the military decisions on how to prosecute the war against the Islamic State. The result has been rapid gains against militant strongholds, and increased cooperation with Moscow to keep the civil war between Assad and rebels out of the way.

According to lines being drawn on a map of the conflict, the United States and its proxies would concede Assad’s control of most of central and southern Syria to just west of the Euphrates River, with a few agreed deviations, said U.S. officials who spoke on the condition of anonymity to discuss classified discussions. In exchange, once Raqqa, the Islamic State’s de facto capital, is retaken, U.S.-backed forces would move downriver to control the militant-populated villages alongside it, to the Iraqi border.

Rather than cooperate with Russia, some administration officials have advocated establishing U.S.-protected outposts in the desert to keep Iran from expanding. Allowing pro-Iranian forces an uncontested presence in Syria’s southern desert, they have argued, would put them in position to set up a land bridge across Syria to supply Hezbollah, the Lebanese Shiite militia. The Pentagon, which disagreed, appears to have won the argument.

An east-west “deconfliction” line is being observed south of Raqqa, where U.S. warplanes and advisers are supporting an offensive by American-trained and -equipped local proxy forces. U.S.-backed forces control most of the territory north of this area to the Turkish border and east to Iraq.

In southwestern Syria, a cease-fire negotiated by the United States and Russia has largely stopped fighting between Assad and opposition forces. “This is our first indication of the U.S. and Russia being able to work together in Syria,” Tillerson said in announcing the deal. “Russia has the same, I think, interests that we do in having Syria become a stable place, a unified place.”

Last month, Trump ordered the shutdown of a years-long CIA program to train and arm the anti-Assad rebels.

“Making any concession to Russia, absent a broader strategy for Syria, is irresponsible and shortsighted,” McCain said in a statement from his home state, where he is being treated for brain cancer.

The Washington-based Institute for the Study of War (ISW), which tracks areas of control and airstrike locations in Syria, noted in a report Friday that Russia was “reshaping its air campaign in ­Syria in order to compel the U.S. into partnering” with Moscow. Russia has almost entirely ceased its airstrikes in western Syria — where government forces have routed rebels from many rebel — and shifted operations farther east, where the Assad regime is advancing toward the Euphrates under the “guise of fighting ISIS.”

This shift, supported by the southwest cease-fire that “further secured Russia’s freedom of action,” has helped open the door to the “deconfliction” negotiations, the ISW report said.

In last week’s briefing for lawmakers, Mattis, Dunford and Tillerson described “prospects for cooperation” with Russia, said Sen. Tim Kaine (D-Va.). Although their enthusiasm was “tempered with expressions of ongoing skepticism,” he said, “I would still say the administration is a little bit more optimistic about that than I am.”

Kaine, who declined to discuss specifics from the classified briefing, said he thinks that dependence on Moscow — and its assurances that Iran also can be kept in line — could end up undermining prospects for a political settlement of the civil war, ultimately without Assad, that the administration has said is key to preventing a vanquished Islamic State from reestablishing itself.

Unlike McCain, Kaine said he thinks the new strategy Trump promised during his campaign is now complete and is being implemented. The next step, he said, is for the public to be informed, and for Congress to pass a new authorization for the anti-Islamic State war that would draw the parameters of that conflict in Syria and beyond.