How Do You Feel About Drone Strikes? Chances Are You Have An Opinion ? Or At Least A Gut Reaction.

How Do You Feel About Drone Strikes? Chances Are You Have An Opinion – Or At Least A Gut Reaction.

Years of debate on the issue show that many Americans have reservations. People are concerned that drone strikes devalue non-American lives, dangerously expand executive power, and drive terrorism and anti-Americanism.

Yet do we actually know much about drone strikes’ political effects? No.

Here’s what we can say: There are two publicly known classified programs that operate drones and fire weapons from them, military and CIA, but research into the strikes’ effects is constrained by government secrecy and limited access to areas where the strikes occur. Even the number of civilians killed is contested. The White House estimates 116 deaths since the beginning of the Obama administration while independent reporters suggest it is as high as 800.

We can also say drones offer some obvious advantages. Strikes can achieve short-term goals like killing leaders of terrorist groups such as al-Qaida in the Arabian Peninsular leader Jalal Baleedi in Yemen. They provide more accurate targeting than crewed armed flights and sea-based weaponry, although they are certainly not perfect. They are often less expensive than manned tools like planes and ships.

But there is profound disagreement over the strikes’ political–that is, strategic–effects.

Whether drone strikes reduce or increase terrorism is murky. The fog is unlikely to clear soon.

Even in this uncertain environment and without hard data, we can draw some conclusions. For example, drone strikes are similar to Special Forces in their direct targeting ability in remote locations, but are less likely to create domestic opposition to the use of force because they don’t put U.S. lives directly at risk. They also evoke less nationalistic backlash because they do not require putting U.S. forces in another state’s territory.

As a political scientist studying the political uses of force, I suggest it’s possible to better understand drone strikes by analyzing them within the context of grand strategy–or how a state thinks about assuring its own security. By doing that, we can begin to determine if these strikes support U.S. goals, or not, and how they compare to other means of attaining the same ends.

There are several different ways of thinking about U.S. grand strategy. For our purposes, it makes the most sense to consider two types–restraint and selective engagement.

These approaches share a cautious attitude toward the use of force. Both agree that the wealth and resources of the European and Asian landmass make it the center of U.S. political and economic interactions and the location where any truly dangerous security threat to the United States would arise.

Where the two approaches differ is on the role of international opinion and non state actors in U.S. security. These are key points in the drones debate.

President Obama is often characterized as a proponent of restraint: He recognizes that the use of force may have higher costs than benefits and that its downstream effects can be incalculable. This recognition is behind his reluctance to intervene directly in internal conflicts such as Syria.

In a world where the U.S. is implementing policies derived from a grand strategy of restraint, military force is a potentially high-cost tool. Drone strikes give the United States a smaller overseas military profile than do land-based conventional forces. This is a political gain. As MIT’s Barry R. Posen argues, “a high and martial profile helps to generate antipathy to the United States, which may create a more supportive environment for violent and determined enemies.”

The site of a drone strike believed to have killed Afghan Taliban leader Mullah Akhtar in southwest Pakistan. Reuters TV

Drone strikes’ greater accuracy and lower profile give them the edge when policymakers are concerned about popular opinion and the potential costs of the use of force. Drone strikes can also reduce perceptions of the United States as a bully whose military behavior may increase radicalization.

Yet drone strikes against sovereign states underline U.S. unilateralism and the country’s fearsome powerprojection capabilities. This is likely to contribute to other states’ fear of the United States as the most powerful state in the world, one unconstrained by others’ interests and wishes. Concern about U.S. strikes can drain liberal partners’ goodwill, potentially affecting U.S. interests in other areas. Germany, for example, has in the past limited intelligence sharing with the United States because of legal and ethical concerns about drone strikes outside battlefields.

and Libya–though Libya’s frail government requested U.S. help against the Islamic State, or IS, before the most recent round of strikes and Pakistan is widely believed to privately support the strikes.

Despite the big controversy, these strikes’ political advantages are small because of limited U.S. interests outside the Eurasian continent and the limited overseas terrorism threat to U.S. interests.

What kind of worldview would push the U.S. away from the use of drones?

Drone strikes have an even more limited role in a grand strategy of selective engagement. This approach emphasizes the role of states in U.S. security rather than non state actors and popular opinion. It focuses on conventional U.S. military power as an instrument enabling state cooperation, so drones’ smaller footprint becomes a political drawback.

Relying on other states to deal with threats within their own territory and using Special Operations Forces and covert action as a complement to partner forces means a minimal role for drone strikes. 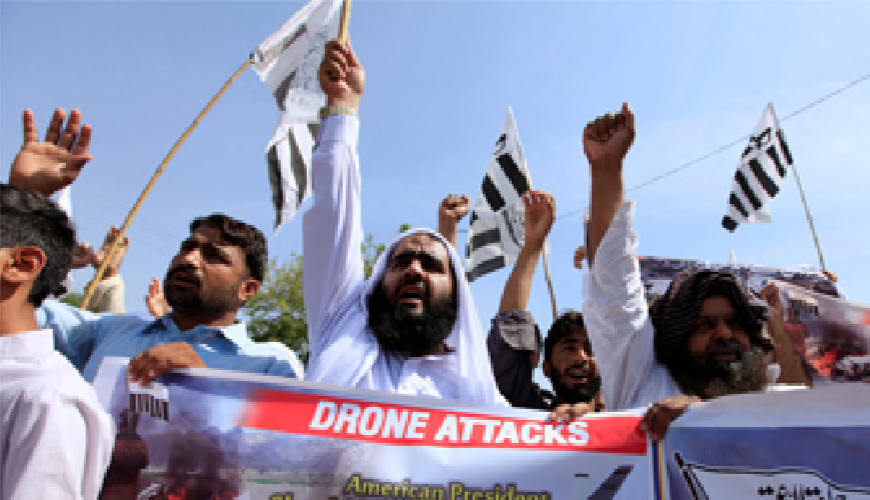 Supporters of the Jamaat-ud-Dawa Islamic organization attend an anti-U.S. protest against drone strikes in Islamabad, Pakistan, May 27, 2016. Faisal Mahmood/Reuters

The most controversial drone strikes target groups and individuals in states without a public U.S. military presence and without that state’s public permission. Within hot war zones, drone strikes are another standoff weapon for achieving tactical effects.

How are the drone programs likely to change under a new president? How will our new leadership see our place in the world?

Hillary Clinton’s worldview is robustly liberal interventionist. This view challenges both restraint and selective engagement in its far broader definitions of U.S. interests and threats.

Clinton supported the Iraq War and sees an activist global leadership role for the U.S., including its military. Her views lead one to expect more U.S. uses of force in more places based on the belief that military force easily translates into the power to achieve political goals. Drone strikes could increase, given their appealingly lower profile, lower cost and greater accuracy. But they could easily be eclipsed by more overt military intervention into internal conflicts that Clinton believes threaten U.S. values and interests, such as Syria and Libya.

Donald Trump’s views on how to assure U.S. security are unclear at best, contradictory at worst. Some predict Trump’s grounding of drones based on his isolationist comments. Others foresee an expanded role for U.S. air power potentially including drones against IS in a Trump presidency.

Turning from high politics to popular views, it’s clear that Americans are concerned about these kinds of drone attacks–apparently unilateral, apparently violating the 350-year-old norm of state sovereignty and conducted without a formal justice process. This reflects well on a public wondering what the U.S. role in the world should be.

But assessing the value of drone strikes requires looking beyond the attacks themselves to first identify and prioritize U.S. interests and threats. Only in that context is it possible to decide whether one supports or opposes drone strikes for what they may gain the United States politically.

Before returning to academia, Hazelton was an international journalist with The Associated Press with posts including New York,    Washington, and Tokyo.