India dithers on the Palestinian question 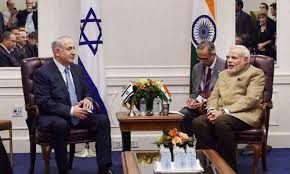 Twenty-five years ago today, India and Israel established diplomatic relations. For decades until 1992, India had abstained out of principle from having close relations with Israel, a state seen as a colonial and apartheid power. But this hesitancy came to an end when India opened up its economy to the winds of globalization and decided to tilt its foreign policy alignment towards Washington.

Having normalized relations with India was a prize for Israel. India remains an influential country in the Global South and Israel hoped that India’s entry into the ledger on its side would break apart the Global South’s solidarity with the Palestinian people. This has not happened. Even India has not been able to fully join the pro-Israel camp.

Being an international scofflaw and an occupying power, Israel has had a hard time breaking its diplomatic isolation among the states of the Global South. Solidarity with the Palestinian people – even if it has weakened over the years – remains strong, from Afghanistan to Zimbabwe. When there is a vote on the Israeli occupation of Palestine in the United Nations General Assembly, the margin is overwhelming: Only a handful of states – led by the US – stand with Israel.

For decades since the 1950s, the Israelis have tried to break this wall of solidarity among the countries of the Global South. Neither sending aid packages to Western African countries, nor pleading to US allies in Asia helped them succeed. None of the states of the Global South would walk away from the basic principle that colonialism is abhorrent and that colonized people must have the right to resist – a formulation that the UN produced in its 1960 resolution on colonialism, which argued that “the process of liberation is irresistible”. They saw Israel as a colonial power and the Palestinians as a people with the right to resist against their occupation.

Over the years that I have covered the story of India’s tilt towards Israel, I’ve met senior Indian diplomats who played a role in the 1992 events. Most of them agree that the real reason why the government – then led by the Congress Party – decided on a rapprochement with Israel is that this was the price demanded by Washington for India’s foreign policy engagement with the US.

Washington, Israel’s emissary, made it clear that there could be no real strategic partnership between India and the US if the former continued to hold adverse views on Israel.

What is important about this fact is that it was the Congress Party, and not the Hindu Right (Bharatiya Janata Party, BJP), that drove the policy of normalization. The BJP, with its instinctual anti-Muslim politics, had long called for close relations with Israel, on the grounds that both the Israelis and the BJP have an antipathy to Muslims.

It was not this anti-Muslim agenda that provoked normalization, but it was the pressure from Washington. The Indian government at that time believed that it had to accede to commands from the International Monetary Fund and that it had to align itself with the new world developments – the emergence of US hegemony with the collapse of the USSR in 1991 and the exhaustion of the ‘Third World Project’. As a result, India paid the price and established full diplomatic ties with Israel. Washington was satisfied.

In 1998, India tested nuclear weapons for the second time, the first being in 1974. The US government was forced to stop selling India certain weapons systems because of the Glenn Amendment, which prohibits US military assistance to countries that acquire or transfer nuclear reprocessing technology outside of the international nonproliferation regimes.

India had, before 1991, relied upon the USSR for weapons systems. It then moved to reliance on the United States and Western Europe. With the Glenn Amendment shutting off the US spigot and with international sanctions making it hard to buy certain systems from Western Europe, India turned to Israel.

Israeli arms manufacturing has long benefitted from a close relationship with Western weapons manufacturers, going into joint ventures with several of them. India was able to buy – essentially – US arms from Israel, sidelining the Glenn Amendment.

India quickly began to buy half of Israel’s arms exports, with annual totals in the billions of dollars. These figures have remained stable over the years, although with the return of Russian arms, India has begun to diversify its sources. Nonetheless, it is clear that the volume of Indian purchases from Israel underwrites the occupation of the Palestinians. This is the most material relationship between India and Israel.

It has been difficult for Israel to bring India to its side in diplomatic circles. India continues to be critical of Israel’s occupation of Palestine – whether it be the wars on Gaza or the settlements in the West Bank and occupied East Jerusalem or indeed Israel’s evisceration of the “peace process”.

Every time the Indian government – ruled by the temperamentally pro-Israel Hindu Right – tries to ignore Israeli actions, it faces an immense pressure from India’s Arab allies, from the diplomatic corps in India and from the Indian left to be more forthright. It will be difficult for India to join the US, Palau and Nauru in the UN General Assembly to vote on behalf of Israel. This would lose India its fragile legitimacy in the Global South.