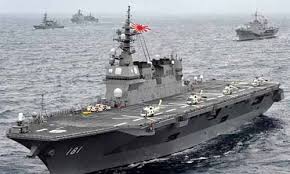 India and Japan hope to put in place a maritime security pact when PM Shinzo Abe visits mid-September for the annual summit amid China’s growing aggression in East and South China Seas besides Indian Ocean Region — a common concern for both New Delhi and Tokyo.

Abe’s visit in the backdrop of the Sino-Indian standoff at Doklam could also help India and Japan develop a common understanding amid China’s unilateral moves to change the status quo along land boundary (Indo-Bhutan-China trijunction) and maritime boundary in East China Sea in Japan’s territory.

In the backdrop of the Sino-Indian boundary standoff, the Japanese PM’s visit for this edition of the annual summit gains added significance as both neighbours of China have been at the receiving end of Beijing’s encroachment along disputed boundaries.

Besides a highlight of Abe’s trip could be attending a ceremony in Gujarat related to High Speed Railway (HSR) project using Japanese Shinkansen technology funded by Tokyo. This is the only HSR project approved in India so far.

India plans to start construction of the approximately 500-km rail link between Ahmedabad and Mumbai in 2018 and get it operational in 2023. Japan has extended a $12 bn package for HSR at a nominal interest of 0.1 percent for 50 years with a moratorium on repayments up to 15 years.

The agreement on the HSR, the MoU on civil nuclear cooperation and two defence pacts were key outcome of Abe’s last visit to India in December 2015. The civil nuclear pact was opernationalised last week adding further momentum to Indo-Japanese strategic partnership. That visit is also memorable for the fact that Abe performed “Aarti” on the banks of river Ganges in Varanasi with PM Narendra Modi.
“Prime Minister Shinzo Abe is considering visiting India between September 12 and 14. Abe wants to reach an agreement with Modi to strengthen bilateral cooperation on maritime security, apparently to address China’s growing activities in the East and South China seas and the Indian Ocean. The two leaders are also expected to discuss potential responses to North Korea, which continues to push forward with its nuclear and missile development programs despite UN sanctions,” Japanese news agency JiJi reported quoting government sources in Tokyo.

Amid the Chinese Belt and Road Initiative across Asia and Africa that has security and economic implications for the region, India and Japan have put in place a freedom corridor from Asia (Indo)-Pacific to Africa to provide a sense of stability. Abe’s visit would give further impetus to joint cooperation under this initiative. Japan is the single largest source country for FDI in India, could see further commitments under Make in India initiative during Abe’s trip.