India needs to cool down its missile fever 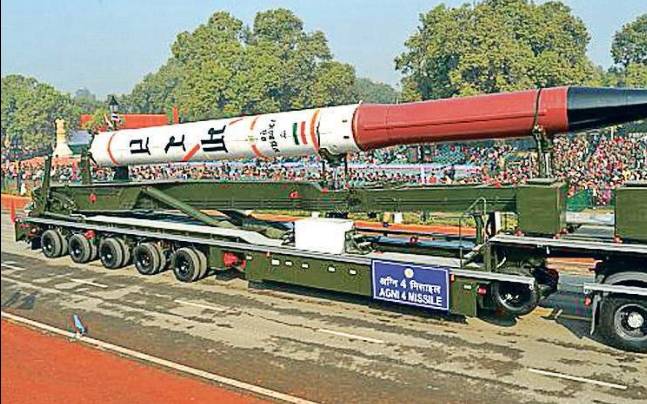 India successfully tested its long-range ballistic missile, Agni-IV, which can travel 4,000 kilometers and carry a nuclear warhead, in the wake of an earlier successful test-firing of Agni-V that has a range of more than 5,000 kilometers. The country’s media were elated in their reports, stressing that India’s tests of the nuclear-capable ballistic missile “covers entire China.” “Agni-V can deter China,” said The Times of India.

India has broken the UN’s limits on its development of nuclear weapons and long-range ballistic missile. The US and some Western countries have also bent the rules on its nuclear plans. New Delhi is no longer satisfied with its nuclear capability and is seeking intercontinental ballistic missiles that can target anywhere in the world and then it can land on an equal footing with the UN Security Council’s five permanent members.

India is “promising” in vying for permanent membership on the UN Security Council as it is the sole candidate who has both nuclear capability and economic potential.

However, Chinese don’t feel India’s development has posed any big threat to it. And India wouldn’t be considered as China’s main rival in the long run. It is simply believed that currently there is a vast disparity in power between the two countries and India knows what it would mean if it poses a nuclear threat to China. The best choice for Beijing and New Delhi is to build rapport.

If the Western countries accept India as a nuclear country and are indifferent to the nuclear race between India and Pakistan, China will not stand out and stick rigidly to those nuclear rules as necessary. At this time, Pakistan should have those privileges in nuclear development that India has.

China is sincere in developing friendly ties with India. But it will not sit still if India goes too far. Meanwhile, New Delhi understands that it does little good to itself if the Sino-Indian relations are ruined by any geopolitical tricks.

In general, it is not difficult for India to produce intercontinental ballistic missiles which can cover the whole world. If the UN Security Council has no objection over this, let it be. The range of Pakistan’s nuclear missiles will also see an increase. If the world can adapt to these, China should too.

India still maintains a strategic defensive posture before China. The Chinese people should not be led astray by India’s extreme words online about its deterrence ability against China. There are similar rhetorics targeting at India in China’s cyber world. But, these aggressive online rhetorics count for little.

At present, India’s GDP accounts for about 20 percent of China’s. China’s strategic nuclear missiles have long ago realized global coverage, and China’s overall military industrial capacity is much better than that of India.

For India, China is something to inspire ambition and invoke patriotism. However, India should realize that owning several missiles does not mean it is a nuclear power. Even though India does become a nuclear power, it will be a long time before it can show off its strength to the world.