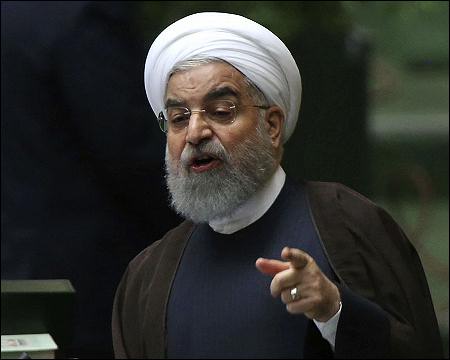 Iran’s president warned Tuesday that it could ramp up its nuclear program and quickly achieve a more advanced level if the U.S. continues “threats and sanctions” against his country, which signed a landmark nuclear accord with world powers in 2015.

Hassan Rouhani’s remarks to lawmakers were his most direct warning that the deal could fall apart and risked ratcheting up tensions with the United States. President Donald Trump has repeatedly said he wants to scuttle the accord, which limited Iran’s ability to produce a nuclear weapon while ending most sanctions against it.

Nikki Haley, the U.S. ambassador to the United Nations, said late Tuesday: “The nuclear deal must not become ‘too big to fail.’”

“Iran, under no circumstances, can ever be allowed to have nuclear weapons,” she said in a statement. “At the same time, however, we must also continue to hold Iran responsible for its missile launches, support for terrorism, disregard for human rights and violations of U.N. Security Council resolutions.”

Earlier this week, Iran’s parliament voted to increase spending on the country’s ballistic missile program and the foreign operations of its paramilitary Revolutionary Guard. The move came in response to U.S. legislation passed earlier this month imposing mandatory penalties on people involved in Iran’s ballistic missile program and anyone who does business with them. The U.S. legislation also applies terrorism sanctions to the Guard and enforces an existing arms embargo.

If Washington continues with “threats and sanctions” against Iran, Tehran could easily step up its nuclear activities, Rouhani said in parliament Tuesday.

“In an hour and a day, Iran could return to a more advanced (nuclear) level than at the beginning of the negotiations” that preceded the 2015 deal, Rouhani said, though he underlined that Iran’s preference is to remain in the accord.

The maneuvering around the Iran deal comes at a time when tensions have skyrocketed between the U.S and North Korea, which has tested nuclear weapons and threatened in recent weeks to fire a ballistic missile into the waters off the U.S. territory of Guam.

The agreement between Iran and world powers two years ago capped Iran’s uranium enrichment levels in return for the lifting of international sanctions.

The U.S. and other world powers fear Iran seeks the ability to produce atomic weapons. Iran has long denied that it seeks nuclear arms and says its nuclear program is only for peaceful purposes.

It was not immediately clear what Rouhani was referring to — and whether he meant Iran could restart centrifuges enriching uranium to higher and more dangerous levels.

He also offered no evidence of Iran’s capability to rapidly restart higher enrichment, though Iran still has its stock of centrifuges. Those devices now churn out uranium to low levels that can range from use as reactor fuel and for medical and research purposes, but could produce the much higher levels needed for a nuclear weapon.

In December, Rouhani ordered up plans to build nuclear-powered ships, something that appears to be allowed under the nuclear deal.

Rouhani’s remarks were likely an attempt to appease hard-liners at home who have demanded a tougher stand against the United States. But they are also expected to ratchet up tensions further with the Trump administration.

Iran has said the new U.S. sanctions amount to a “hostile” breach of the 2015 nuclear deal.

“The U.S. has shown that it is neither a good partner nor a trustable negotiator,” Rouhani added. “Those who are trying to go back to the language of threats and sanctions are prisoners of their past hallucinations. They deprive themselves of the advantages of peace.”

But Rouhani also tempered his own threat, adding that Iran seeks to remain loyal to its commitments under the nuclear deal, which opened a “path of cooperation and confidence-building” with the world.

“The deal was a model of the victory of peace and diplomacy over war and unilateralism,” said Rouhani. “It was Iran’s preference, but it was not and will not remain Iran’s only option.”

Among the staunch supporters of the nuclear deal is U.N. Secretary-General Antonio Guterres.

U.N. spokesman Stephane Dujarric said Tuesday that Guterres considers the accord “to be one of the utmost diplomatic achievements in our collective search for peace and security — and we need to do whatever we can to preserve it.”