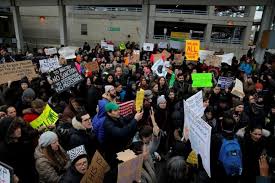 A federal judge in Brooklyn came to the aid of scores of refugees and others who were trapped at airports across the United States on Saturday after an executive order signed by President Trump, which sought to keep many foreigners from entering the country, led to chaotic scenes across the globe.

The judge’s ruling blocked part of the president’s actions, preventing the government from deporting some arrivals who found themselves ensnared by the presidential order. But it stopped short of letting them into the country or issuing a broader ruling on the constitutionality of Mr. Trump’s actions.

The high-stakes legal case played out on Saturday amid global turmoil, as the executive order signed by the president slammed shut the borders of the United States for an Iranian scientist headed to a lab in Massachusetts, a Syrian refugee family headed to a new life in Ohio and countless others across the world.

Mr. Trump — in office just a week — found himself accused of constitutional and legal overreach by two Iraqi immigrants, defended by the American Civil Liberties Union. Meanwhile, large crowds of protesters turned out at airports around the country to denounce Mr. Trump’s ban on the entry of refugees and people from seven predominantly Muslim countries.

Lawyers who sued the government to block the White House order said the judge’s decision could affect an estimated 100 to 200 people who were detained upon arrival at American airports.

Judge Ann M. Donnelly of Federal District Court in Brooklyn, who was nominated by former President Barack Obama, ruled just before 9 p.m. that implementing Mr. Trump’s order by sending the travelers home could cause them “irreparable harm.” She said the government was “enjoined and restrained from, in any manner and by any means, removing individuals” who had arrived in the United States with valid visas or refugee status.

The ruling does not appear to force the administration to let in people otherwise blocked by Mr. Trump’s order who have not yet traveled to the United States.

The judge’s one-page ruling came swiftly after lawyers for the A.C.L.U. testified in her courtroom that one of the people detained at an airport was being put on a plane to be deported back to Syria at that very moment. A government lawyer, Gisela A. Westwater, who spoke to the court by phone from Washington, said she simply did not know.

Hundreds of people waited outside of the courthouse chanting, “Set them free!” as lawyers made their case. When the crowd learned that Judge Donnelly had ruled in favor of the plaintiffs, a rousing cheer went up in the crowd.

Minutes after the judge’s ruling in New York City, another judge, Leonie M. Brinkema of Federal District Court in Virginia, issued a temporary restraining order for a week to block the removal of any green card holders being detained at Dulles International Airport.

In a statement released early Sunday morning, the Department of Homeland Security said it would continue to enforce all of the president’s executive orders, even while complying with judicial decisions. “Prohibited travel will remain prohibited,” the department said in a statement, adding that the directive was “a first step towards re-establishing control over America’s borders and national security.”

Around the nation, security personnel at major international airports had new rules to follow, though the application of the order appeared chaotic and uneven. Humanitarian organizations delivered the bad news to overseas families that had overcome the bureaucratic hurdles previously in place and were set to travel. And refugees already on flights when the order was signed on Friday found themselves detained upon arrival.

“We’ve gotten reports of people being detained all over the country,” said Becca Heller, the director of the International Refugee Assistance Project. “They’re literally pouring in by the minute.”

Earlier in the day, at the White House, Mr. Trump shrugged off the sense of anxiety and disarray, suggesting that there had been an orderly rollout. “It’s not a Muslim ban, but we were totally prepared,” he said. “It’s working out very nicely. You see it at the airports, you see it all over.”

But to many, the government hardly seemed prepared for the upheaval that Mr. Trump’s actions put into motion.

There were numerous reports of students attending American universities who were blocked from returning to the United States from visits abroad. One student said in a Twitter post that he would be unable to study at Yale. Another who attends the Massachusetts Institute of Technology was refused permission to board a plane. A Sudanese graduate student at Stanford University was blocked for hours from entering the country.

Human rights groups reported that legal permanent residents of the United States who hold green cards were being stopped in foreign airports as they sought to return from funerals, vacations or study abroad. There was widespread condemnation of the order, from religious leaders, business executives, academics, political leaders and others. Mr. Trump’s supporters offered praise, calling it a necessary step on behalf of the nation’s security.

Legal residents who have a green card and are currently in the United States should meet with a consular officer before leaving the country, a White House official, who spoke on the condition of anonymity, told reporters. Officials did not clarify the criteria that would qualify someone for a waiver, other than that it would be granted “in the national interest.”

But the week-old administration appeared to be implementing the order chaotically, with agencies and officials around the globe interpreting it in different ways.

The Stanford student, Nisrin Omer, a legal permanent resident, said she was held at Kennedy International Airport in New York for about five hours but was eventually allowed to leave the airport. Others who were detained appeared to be still in custody or sent back to their home countries.

White House aides claimed on Saturday that there had been consultations with State Department and homeland security officials about carrying out the order. “Everyone who needed to know was informed,” one aide said.

But that assertion was denied by multiple officials with knowledge of the interactions, including two officials at the State Department. Leaders of Customs and Border Protection and of Citizenship and Immigration Services — the two agencies most directly affected by the order — were on a telephone briefing on the new policy even as Mr. Trump signed it on Friday, two officials said.

The White House said the restrictions would protect “the United States from foreign nationals entering from countries compromised by terrorism” and allow the administration time to put in place “a more rigorous vetting process.” But critics condemned Mr. Trump over the collateral damage on people who had no sinister intentions in trying to come to the United States.

Peaceful protests began forming Saturday afternoon at Kennedy Airport, where nine travelers had been detained upon arrival at Terminal 7 and two others at Terminal 4, an airport official said. Similar scenes were playing out at other airports across the nation.

An official message to all American diplomatic posts around the world provided instructions about how to treat people from the countries affected: “Effective immediately, halt interviewing and cease issuance and printing” of visas to the United States.

Internationally, confusion turned to panic as travelers found themselves unable to board flights bound for the United States. In Dubai and Istanbul, airport and immigration officials turned passengers away at boarding gates and, in at least one case, ejected a family from a flight it had boarded.

Iranian green card holders who live in the United States were blindsided by the decree while on vacation in Iran, finding themselves in a legal limbo and unsure whether they would be able to return to America.

“How do I get back home now?” said Daria Zeynalia, a green card holder who was visiting family in Iran. He had rented a house and leased a car, and would be eligible for citizenship in November. “What about my job? If I can’t go back soon, I’ll lose everything.”