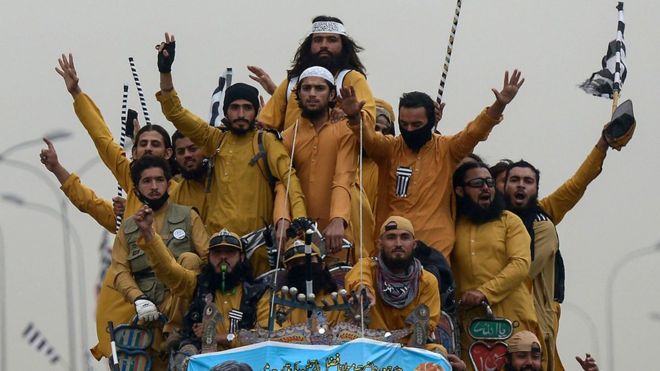 The shattering economic condition of Pakistan is paving way for the Islamist party which has started to threaten the government of Pakistan and is leading towards political unrest.  The party is trying to turn the country into a battlefield after Imran Khan refused to step down the demand made by the leadership of the party. Maulana Fazal ur Rehman’s “freedom march” protest has gained enough support from opposition parties. It is expected that this group will encourage thousands of people from the chain of madrassas that it is operating across Pakistan and will bring them out to the streets. Owing to the other parties like Pakistan Muslim League Nawaz (PMLN) and Pakistan People’s Party (PPP), JUI-F has managed base to support his cause.

Following Deobandi School, the members of JUI-F have strived and have played a great role in politics. Considering the economic condition of Pakistan, Fazal ur Rehman has made economy the essence of his campaign against Prime Minister Imran Khan. According to Fazal “This government always tries to deflect people’s attention from its economic failures. But the agony caused by inflation and the end of manufacturing is not attracting them to the government’s claims of going ahead with an accountability drive (aimed at weeding out corruption).”

Fazal ur Rehman considers inflation as a number one issue, therefore, people affected by inflation, unemployment and increased taxes find his judgment appealing. The railways’ minister Sheikh Rashid alleged Maulana Mufti Mehmood father of Maulana Fazal ur Rehman of using religion as a tool for political gains. He advised Fazal ur Rehman not to involve himself in religious agitation in the country as it will affect the Kashmir freedom movement by stating that “I want to give a message to religious forces that the Maulana is going to lead a clash on politics and religious issues.” Fazal ur Rehman’s protest will further aggravate the political instability which will contribute to the economic misery and will shock overall businesses and the economy.

JUI-F has always been exploiting the civil-military differences to make space for its political interests. The party has been observing that it has been sidelined by the government from national politics. Moreover, JUI-F is concerned about mainstreaming of around 30,000 religious seminaries including institutes run by it, which will further isolate the party’s hold over its political base stemming from these seminaries. JUI’s intention to go against the government and remove it from power is unlikely rather it will create political unrest.