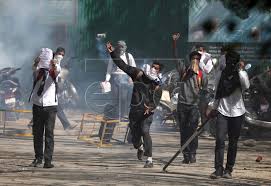 Students and government forces in Indian-administered Kashmir clashed again as authorities reopened schools and colleges, just one week after facilities were shut following student-led protests across the disputed territory.

Violence erupted on Monday in the SP Higher Secondary School in Srinagar’s Lal Chowk – the main commercial hub in the Himalayan region.

Government forces used tear gas and water cannon to stop students from marching in the streets.

The students retaliated by hurling stones and breaching barricades set up by police and paramilitary soldiers.

They chanted “Go India, go back” and “We want freedom”. Students and some police personnel sustained injuries in the clashes.

As residents joined the students, the clashes with government forces spilled into the city’s main streets.

Shopkeepers lowered their shutters and bystanders took refuge inside.

Troops later fired live ammunition into the air to quell the growing protests.

Violent protests first erupted on April 15, when security forces raided a college in southern Kashmir’s Pulwama district about 30km south of Srinagar, and assaulted students – at least 54 sustained injuries. Authorities did not say what they were looking for in the raid.

The state government has since been trying to pacify protesters but have failed to do so.

“We understand that students have grievances but we appeal them to resume classes as we have already ordered an investigation into the incident that happened in Pulwama Degree College on April 13,” Syed Altaf Bukhari, the state minister of education, told Al Jazeera.

“We are handling the situation peacefully as they are our own children. I am in touch with the principals and teachers who have been told to counsel the students and listen to their issues,” he said.

On April 17, another round of student protests across the region left more than 100 students and an unknown number of police officers injured. Authorities responded by closing colleges, universities and some high schools for a week, but the protests continued unabated.

Earlier in the day, the state chief minister Mehbooba Mufti met Indian Prime Minister Narendra Modi in New Delhi to discuss the situation in the region that has been on the boil since last year after the killing of a popular rebel commander.

India and Pakistan each administer a portion of Kashmir, but both claim the Himalayan territory in its entirety. Most people in the Indian-controlled portion favour independence or a merger with Pakistan.

Rebel groups have been fighting government forces since 1989. About 70,000 people have been killed in the uprising and in a subsequent Indian military crackdown. India and Pakistan have fought two wars over control of Kashmir.

Rebel groups have largely been suppressed by Indian forces in recent years. However, public opposition to Indian rule remains deep and is now principally expressed through street protests by youths hurling stones at government forces.