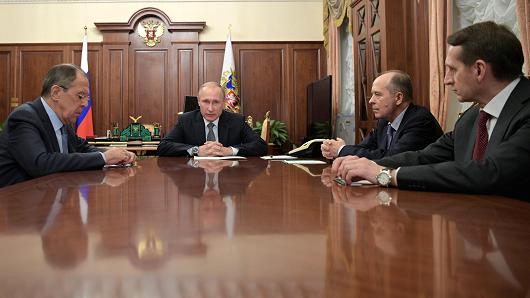 The Kremlin reacted to the indictment of Russian nationals for illegal interference in the 2016 U.S. presidential elections.

Spokesman Dmitry Peskov told reporters on a conference call Monday that the U.S. charges did not contain any proof that the Russian state had been involved in such activity, according to Reuters and Russian news agency TASS.

On Friday, the Department of Justice indicted 13 Russian nationals and three Russian entities for interference in the 2016 presidential election. The indictment said that a Russian propaganda arm had overseen a conspiracy to favor President Donald Trump over his campaign rival Hillary Clinton. A separate investigation is examining whether the Trump campaign colluded with Russians, which Trump denies.

The Kremlin said allegations of Russian state involvement were “unfair and baseless,” however.

“Russia did not interfere, it does not have such a custom — to interfere in the internal affairs of other counties, and does not do it now,” Peskov said.

“First, as before, we do not see any significant evidence that someone interferes in the internal affairs of the U.S. Second, we are talking about Russian citizens, but we heard from Washington accusations about the involvement of the Russian state, the Kremlin, and the Russian government. There are no indications that the Russian state could have any involvement in this — and there can’t be,” he said.