No victory in Afghanistan without Pakistan’s support: US military chief 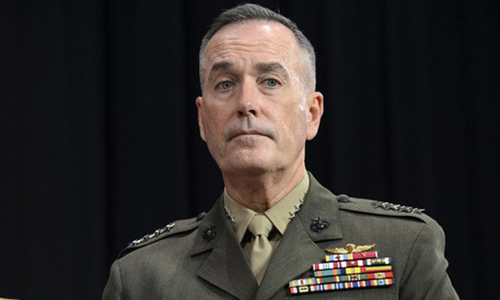 And US Defence Secretary James Mattis has said that a recent decision to stop reimbursements to the Pakistani military was not part of a tougher new US policy for Pakistan but it did reflect ground realities.

Chairman of the US Joint Chiefs of Staff General Joseph Dunford underlined Pakistan’s role in bringing peace to Afghanistan at the Aspen Security Forum in California on Sunday, when he was asked if the ongoing review of the US Afghan policy included Pakistan.

“Absolutely. I mean this is from New Delhi to Tehran when we talk about South Asia and a critical element of our strategy in the region has to be Pakistan,” said Gen Dunford while explaining that the Trump administration was reviewing its policies for the entire South Asian region and not just Afghanistan.

“And we cannot be successful in Afghanistan — we’ve seen that over the last several years — unless we have a higher degree of cooperation from Pakistan. So Pakistan is absolutely an integral part of the strategic review that’s ongoing,” said the US general, stressing Pakistan’s key role in the region as well as in Afghanistan.

At a news briefing on Friday, Secretary Mattis was asked if his recent refusal to certify Pakistan’s cooperation in eliminating the Haqqani network was part of the new strategy that the White House and Pentagon experts were working on.

“No. This is simply an assessment of the current state of play. It’s not a — it’s not a policy. It is a reality. You know, we’re just defining the realities,” Mr Mattis said in his response.

The refusal blocked about $50 million of reimbursement to the Pakistani military and may affect future reimbursements and military assistance, until the secretary certifies that Islamabad has taken sufficient steps against the Haqqani network.

At the Aspen seminar, Gen Dunford also warned against placing artificial timelines on operations in Afghanistan, as the Obama administration did when it announced its intent to withdraw all US troops from there by 2014.

Putting a timeline was not good for the confidence of the Afghan people, and it caused hedging behaviour in the region as well, he said. “It undermines our cooperation with Pakistan if they don’t believe we will be there long enough to establish security and stability,” he added.

The general said he could give details of the ongoing review but he believed that a strategy had to “provide more capability on the ground” for it to have a chance of being successful. “And so I do believe that additional forces for the Afghan security forces would make them more competitive” and would help the conventional forces combat the militants with “more power”, he added.