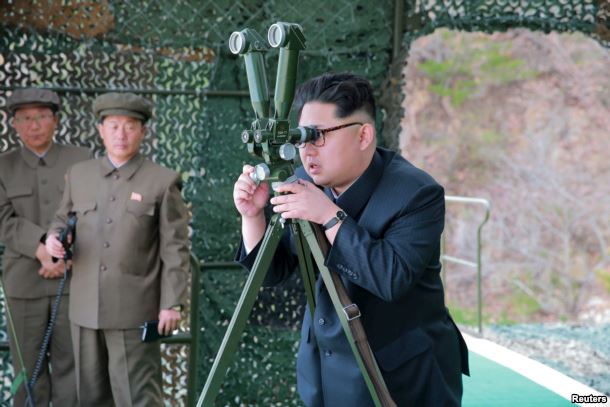 The tubby tyrant brought in the new year by issuing a chilling warning his nation was close to launching an intercontinental ballistic missile.

But according to a North Korea expert Kim has been watching Donald Trump’s reaction over Iran amid his own plans to launch a ICBM.

Analysts initially believed the despot leader would target Trump’s inauguration – but it appears the dictator has decided to hold off despite reports he has re-opened his nuclear reactor.

Ken Gause, a senior North Korea analyst at CNA Corp said: ”It has been my contention that North Korea would delay testing an ICBM or a nuclear test until they had a better read on the Trump administration.

“They will closely watch the US response to Iran’s test.”

It comes after unconfirmed reports stated a missile launched last year by the Islamic Republic featured an R-27 engine imported from North Korea.

Kim Jong-un has declared he could launch a nuke from anywhere and at anytime.

North Korea’s ICBM, with a range of 5,500 miles, could cause devastation if launched at the US.

US defence secretary James “Mad Dog” Mattis issued his own chilling warning, declaring the US will defeat any nuclear weapons sent their way.

Iran was hit with 26 sanctions by the US after its missile launch.

It comes as a Trump advisor revealed these actions were “only the beginning” as the US president said “nothing was off the table”.