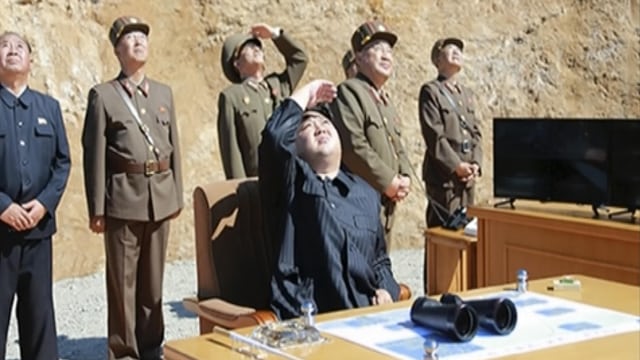 US President Donald Trump implied in one of his latest tweets that he forced North Korea to back down over its threat to Guam. It’s a dangerous mis-perception that could cause the crisis to escalate and Trump to miss what could be the best chance he will have to halt the tests of missiles that can now threaten the American homeland.

Anxious about annual US-South Korea military exercises that begin next week, Pyongyang has presented the United States with a clear, coercive choice: reduce tensions or face a highly destabilizing missile strike to the waters around Guam.
A close reading of the threat shows it remains very much in effect and deserves a firm and deliberate response.
For the last year, US conventional B-1B bombers have flown missions from Andersen Air Force Base in Guam to the Korean Peninsula, most recently on August 8.
The next day, North Korea’s state media service, KCNA, declared that the regime’s strategic force was “carefully examining the operational plan for making an enveloping fire at the areas around Guam.”
The statement designated a specific missile (the Hwasong-12) and said that B-1B flights had provoked the threat.
Two days later, KCNA refined the threat, specifying the launches would be a salvo fire of four missiles and detailing their trajectory over Japan. The Strategic Force would report the option to Kim in mid-August.

In short, North Korea presented the United States with a clear choice: stop B-1B flights or risk highly destabilizing missile launches.
These statements represent a new model of threat for North Korea: the threat of damaging or menacing missile launches to coerce its enemies into altering their military posture.
The United States should expect more threats of this sort from Pyongyang, potentially threatening more dangerous strikes to coerce US allies or demand withdrawal of US forces, a fact that makes it even more important that the United States make a firm and deliberate response quickly.
On August 15, KCNA reported that Kim Jong Un was briefed on the plan and released pictures of Kim dutifully inspecting maps in front of a satellite image of Andersen.
It was a textbook and skillful display of brinksmanship intended to remind the United States that the threat is still on the table. However, the threat also evolved in a critical way: it was no longer explicitly linked to B-1B flights.

What the US should do

The statement has been widely misreported as North Korea unilaterally backing down from its earlier threat or putting it off indefinitely.
In fact, Pyongyang took the next step down the path that it had clearly telegraphed and says it is waiting “a little more” for a response: “If the Yankees persist in their extremely dangerous reckless actions… [we] will make an important decision as it already declared…”
The threat has not been lifted; they have thrown the ball into our court.
Because North Korea has consistently cheated on its agreements, in no circumstance should the United States make an offer that would degrade its deterrent capabilities.
For example, the United States should not offer to halt upcoming military exercises summarily but—provided Gen. Vincent K. Brooks, commander of US Forces Korea, can certify that military readiness could be maintained—we might offer to modify the scope, scale, and location of US exercises, including the largely symbolic B-1B flights.
If this is successful—and the test freeze holds—the next step would be to build out to other areas of conventional arms control to decrease the possibilities for escalation along the land and naval borders that separate the two Koreas.
The chance of talks remains low. Trump administration officials have repeatedly denigrated the Iran nuclear deal; any talks with North Korea would be even more grueling, any agreement modest and prone to failure.

Though Secretaries James Mattis and Rex Tillerson support negotiations, their insistence that North Korea indicate its good faith through “immediate cessation of its provocative threats, nuclear tests, missile launches, and other weapons tests” may in practice prevent talks.
Yet (intentionally or not) North Korea has not tested a missile since it crossed the critical ICBM threshold three weeks ago. The United States (intentionally or not) has not flown a B-1B to the peninsula since the Guam threat was first issued.
There is also significant risk that a White House distracted by domestic crisis, that has little experience with diplomacy, and that has walled itself off from the State Department rank-and-file, never understood the nature of the threat to Guam or that there was an opening for restraint.
If the United States does not respond by the start of exercises next week, North Korea will likely take it as a sign that their threat was deliberately defied, and Kim could decide to order the launch.
This is precisely the kind of miscalculation and miscommunication that history tells us can lead to a war nobody wants.
This is the best opportunity the United States has had to restrict North Korea’s missile program in more than a decade. It is very possibly the Trump administration’s only chance.
If the United States fails to seize it, the missiles will continue to fly. Without a negotiated constraint, the threatened launches toward Guam may or may not occur—but North Korea will certainly continue to perfect its new ICBM.
Courtesy: CNN