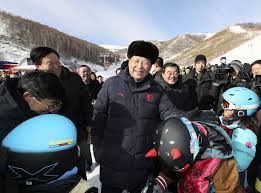 U.S. intelligence agencies and the Pentagon’s Strategic Command are working on a new evaluation of whether the Russian and Chinese leadership could survive a nuclear strike and keep operating, even as President Donald Trump seeks to reshape relations with both nations.

While Trump has pledged to “greatly strengthen and expand” U.S. nuclear capabilities, he also has predicted he can make deals with Putin that may include reducing U.S. sanctions in return for future cuts in nuclear arsenals. The two leaders talked by phone for about an hour on Saturday.

Under the little-noticed provision in this year’s defense authorization measure, the Office of the Director of National Intelligence and the U.S. Strategic Command — which plans and would execute nuclear strikes — will evaluate the post-attack capabilities of the two nuclear powers. The law mandates a report on Russian and Chinese “leadership survivability, command and control and continuity of government programs.”

The review is to include “the location and description of above and underground facilities important to the political and military” leadership and which facilities various senior leaders “are expected to operate out of during crisis and wartime.”

The Strategic Command is also directed to “provide a detailed description” for “how leadership survivability” and “command and control” in Russia and China are factored into the U.S.’s own nuclear war planning. The directive was championed by Republican Representative Michael Turner of Ohio, a member of the House Armed Service Committee’s Strategic Forces panel.

“Our experts are drafting an appropriate response,” Navy Captain Brook DeWalt, a spokesman for the Strategic Command, said in an e-mail. While “it’s premature to pass along any details at this point, we can update you further at a later date.”

Trump has signaled support for upgrading the U.S. nuclear arsenal. In a memorandum on Friday, he ordered Defense Secretary James Mattis to “initiate a new Nuclear Posture Review to ensure that the United States nuclear deterrent is modern, robust, flexible, resilient, ready, and appropriately tailored to deter 21st-century threats and reassure our allies.”

The government already was planning what arms control advocates say may be a trillion-dollar modernization of the air-sea-land triad over 30 years starring in the mid-2020s when operations and support are included. Those plans were approved under former President Barack Obama.

“The United States must greatly strengthen and expand its nuclear capability until such time as the world comes to its senses regarding nukes,” Trump wrote in a Dec. 22 Twitter posting. Also in December, Mika Brzezinski, co-host of MSNBC’s ‘Morning Joe’ show, said Trump told her in a phone call: “Let it be an arms race. We will outmatch them at every pass and outlast them all.”

In addition, Trump and his national security team have vowed to confront China on issues from trade to its territorial claims in the South China Sea.

Last week, the Bulletin of the Atomic Scientists cited “nuclear volatility” along with climate change as reasons it has moved up its symbolic “Doomsday Clock” by 30 seconds to two and a half minutes to midnight, the closest to a potential global disaster since 1953.

Representative Turner said in an e-mail that the U.S. “must understand how China and Russia intend to fight a war and how their leadership will command and control a potential conflict. This knowledge is pivotal to our ability to deter the threat.”

Russia and China “have invested considerable effort and resources into understanding how we fight, including how to interfere with our leadership’s communication capabilities,” he said. “We must not ignore gaps in our understanding of key adversary capabilities.”

Targeting “leadership and relocation locations is part of long-standing U.S. strategy to make clear that potential enemy leaders understand they cannot win a nuclear war,” Franklin Miller, a former senior Pentagon official who served under seven defense secretaries and as the National Security Council’s senior director for defense policy and arms control, said in an interview.

Because such issues have been part of U.S. nuclear planning for decades, Turner is probably raising more specific issues he can’t talk about publicly, Hans Kristensen, director of the Nuclear Information Project at the Federation of American Scientists, said in an e-mail.

Nuclear leaders in Russia and China “plan to direct nuclear forces from inside command bunkers buried deeply beneath the earth or deeply inside mountains,” said Bruce Blair, a Princeton University research scholar on nuclear security policy and co-founder of Global Zero, a group devoted to eliminating nuclear weapons.

Turner’s statement implies that “deterring them requires U.S. strategic cruise missiles that can maneuver around the mountains to strike the bunkers from any angle,” Blair said.