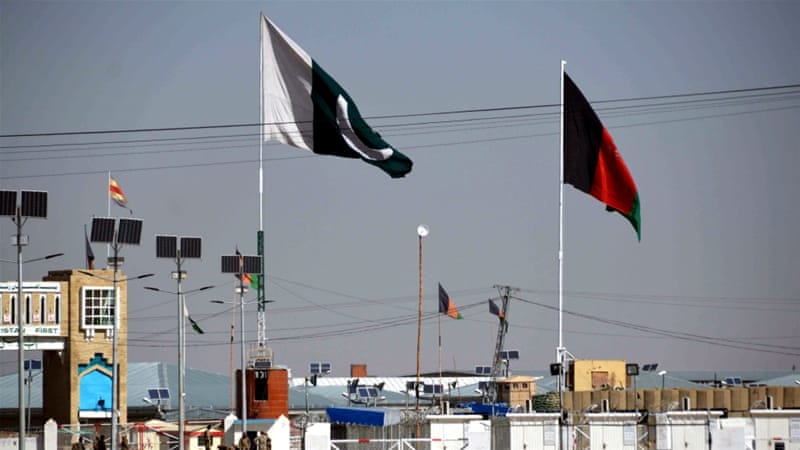 Pakistan is and may be one of the very uncommon countries in the world to have militarily active kinetic energy borders. At both fronts i.e. east and west, where mild to bold skirmishes takes place with the Indian army, the Afghan army and the Taliban at almost regularity. When Pakistan manages one side of the front, the other gets hot and when at both ends adversarial armies are not in engaging mood, Taliban’s strike. So, overall, it’s an overstretch quagmire from which Pakistan must pull out by near future or its security forces may rubber out and that may be the bigger design of the adversary.

Pakistan has an extremely fluid international border with Afghanistan, running almost 2200 KM, from where Afghan army and then the Taliban are always in a mode of radiating energy. Pakistan army and its paramilitary Frontier Corp (F.C) troops are deployed all along the border for the watch out. Almost two years ago, Islamabad decided to fence this border. Since that day till the present running time, skirmishes with Afghan army and at times with the Taliban have spiked to unprecedented levels at different hotspots from Chitral district down till Chaghi district over the zero line. These brief encounters happen either over the subject of construction of bunkers or fencing.

In the just one moth, October 2019, Afghan and Pakistan army exchanged a good ratio of heavy fire at Narai district / Kunar province – Arundu area / Chitral district axis. Plea for Afghan army to open up was that Pakistan army has constructed few bunkers over their side of the border and that was insupportable to them. Although, at the flag meetings, it was well contended and plumped to amicably solve the matter, but the trigger-happy attitude of Afghan army spoiled the party.

By same month account, Afghan army once again argued and this time it was over the construction of fencing by Pakistan, passing by Zazi Aryub district / Paktia Province – Kurram tribal district axis. A possible exchange of fire was ably forestalled by Pakistan with an apt flag meeting and readjustments were done immediately. There are many more hotspots over the zero line which can erupt at any given time till the time fencing and construction of bunkers is not finalized, once and for all.

So, the riddle to solve here is, that if a mechanism is in place to contemplate over such matters at the flag meetings and settle them affably then why resort to exchange of fire. A well thought out mastery would be that the novice attitudes of the Afghan army is to kill the essence of such peaceful measures. The hate has morphed in the adrenaline of their rank and file so much that they resort to open fire rather than talking. While not realizing from the past experiences, that it’s the talking that has always resolved disputes. Prime examples are the heavy exchanges at construction of gate by Pakistan at Torkham border crossing, exchanges over the construction of bunkers at Kurram tribal district – Zazi Maidan district / Khost province, fencing at Killi Luqman at Qilla Abdullah district axis and list goes on.  At all these bloody exchanges, talks were held, and issues were settled.

The world has seen that from past two years that there is a completely new policy in place by Pakistan for Afghanistan and that is to further the hand of friendship and bridge gaps. The fulcrum of this policy included water tightening the Pakistan – Afghanistan border by fencing it. The second prime column of this policy was that all high profiles from Pakistan visit Kabul and assure the Afghans about the genuine efforts being put in place to mend fences. However, these visits were never reciprocated, except for Ashraf Ghanni paying a visit at last when as per his consideration he saw Pakistan taking concrete measures.

At large, the fresh start sooner materialized to produce dividends and that forced Ashraf Ghanni to pay a fertile visit to Islamabad. But this bridging gap does not auger well within certain neighborhoods and power centers within the government which looks at it with soring eyes. So, they take a jab at opportune time and try at length to create a fiasco. These cunning bites have now attained cemented basis to the tune that be it border scuffles, media campaigns or discussions at the parliament and senate of Afghanistan, mocking Pakistan has become a norm.

Recently new episodes of teasing Pakistan’s embassy staff at Kabul have begun. From their strolls at Kabul, to driving around, unidentified vehicles and men tormenter them to the fullest. It has spiked to such levels that Pakistan embassy reciprocated and eventually decided to shut her operations till Afghan government investigates the matter.

It’s obvious from the fact that such measures are adopted, although being very few, to keep Kabul’s dagger drawn with Islamabad. Under these circumstances the government of Pakistan must stay level headed by acting mature and reading these designs well and carry forward the policy of appeasement without being deterred. In case Pakistan falter’s and starts to react to these measures, then what would be the difference from being a state with standing institutions to the one with a weak central auditory having ample chaos. With this in mind, foreign secretary of Pakistan and DG-ISI dashed to Kabul and sat down with Afghan high ups to resolve the issue of diplomatic harassment. This act of maturity is surely coming from a country which has indeed the upper hand at calling the shots but wants to tone down and formulate a way out peacefully.

For the future times, the way ahead for Pakistan and Afghanistan falls in the peaceful working mechanisms that have already been worked out between the two capitals.