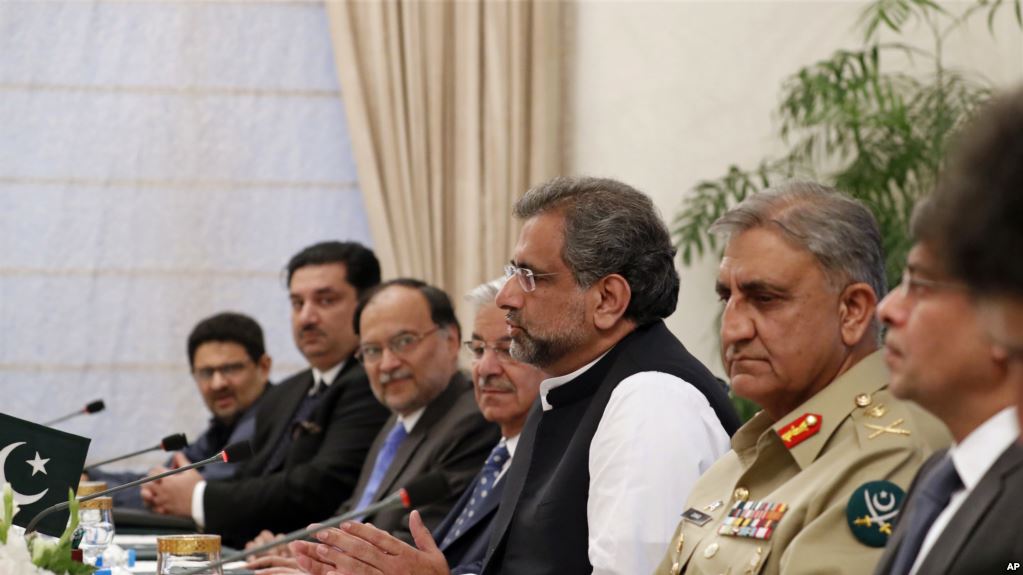 Pakistan has criticized and noted with “deep disappointment” charges contained in a New Year tweet by U.S. President Donald Trump and said Islamabad could not be held responsible for the “collective failure” in Afghanistan.

Trump tweeted Monday the United States had received “nothing but lies and deceit” in return for “foolishly” giving Pakistan more than $33 billion in aid in the last 15 years to fight terrorism.

“They give safe haven to the terrorists we hunt in Afghanistan, with little help. No more!” Trump concluded in his first tweet of 2018.

His criticism instantly provoked strong condemnation and reaction from Pakistani politicians and commentators. The foreign ministry Monday night summoned the U.S. Ambassador to protest and seek an explanation.

The Pakistani government issued a formal response Tuesday after an emergency meeting of the National Security Committee of top civilian and military leaders, with Prime Minister Shahid Khaqan Abbasi in the chair.

A statement issued after the meeting underscored Pakistan’s significant contributions toward promoting regional and global peace and security.

“Pakistan has fought the war against terrorism primarily out of its own resources and at a great cost to its economy, and that even more importantly the huge sacrifices made by Pakistan,” it said.

The statement went on to reiterate that tens of thousands of Pakistani civilians and security personnel have lost their lives and the pain of their families “could not be trivialized so heartlessly by pushing all of it behind a monetary value – and that too an imagined one.”

It rejected as “completely incomprehensible” recent statements and articulation by the American leadership for contradicting “facts manifestly, struck with great insensitivities” at the trust between Pakistan and the U.S. built over generations.

Pakistan is firmly supporting and facilitating the U.S.-led international efforts in Afghanistan through “vital lines of communications” for smooth counterterrorism operations in the neighboring country, according to the statement.

Thousands of U.S. and coalition forces in Afghanistan still rely mostly on ground and air routes through neighboring Pakistan for receiving vital supplies. Analysts still rule out a complete breakdown in relations between Islamabad and Washington.

They note that current tensions with Russia and Iran leave the Trump administration with almost no options but to rely on Pakistani supply routes to sustain the Afghan military mission. Islamabad had for months suspended the lines of communications in 2011 to protest U.S. bombings of Pakistani border posts that killed 24 soldiers.

The routes were restored only after Washington issued apologies for mistakenly hitting the Pakistani posts.

“The real challenges in Afghanistan were political infighting, massive corruption, phenomenal growth of drug production and expansion of ungoverned spaces inside Afghanistan full of sanctuaries for multiple international terrorist organizations, posing a serious and direct threat to Afghanistan, its neighbors and the entire region,” read Tuesday’s Pakistani statement.

Pakistani Foreign Minister Khawaja Asif in a tweet Tuesday questioned Trump’s assertions of giving Islamabad more than $33 billion dollars. Asif insisted that Trump “can hire a US based Audit firm on our expense to verify this figure & let the world know who is lying & deceiving.”

Washington has long accused Pakistan, especially its security institutions, of turning ignoring or covertly helping the Afghan Taliban and the Haqqani terrorist network to stage cross-border attacks against Afghan and U.S.-led forces.

Islamabad denies allegations it is harboring Afghan insurgents and instead complains anti-state militants are using the neighboring country for terrorist attacks against Pakistan.

“Pakistan has made tremendous efforts and sacrifices in combating terrorism and made outstanding contributions to the international anti-terrorism cause,” said Chinese Foreign Ministry spokesman Geng Shuang in Beijing.

The two countries, he added, maintain an “all-weather strategic partnership” and China intends to further deepen its cooperation with Pakistan in all fields.

China is investing billions of dollars to help build a network of power plants, rail, road, and communications in Pakistan. The unprecedented planned investment of about $60 dollars under the China Pakistan Economic Corridor or CPEC has cemented economic and political ties between the two countries, who already enjoy deep military cooperation.