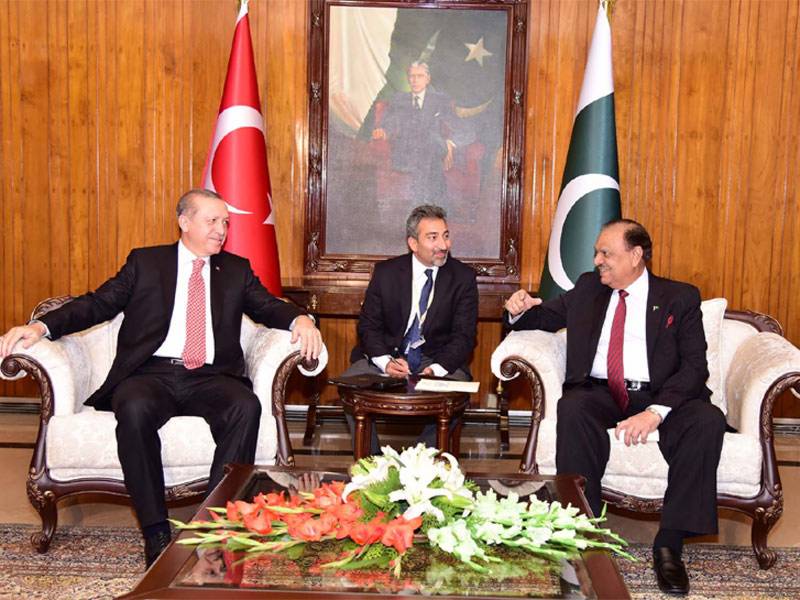 They agreed to further deepen the existing cooperation in trade and defence relations, settlement of Kashmir dispute in accordance with UN resolutions, joint efforts for durable peace in Afghanistan and elimination of terrorism.

The two Presidents had one-to-one meeting which was followed by a delegation level meeting at the Aiwan-e-Sadr.

On the occasion, President Mamnoon Hussain proposed to conclude a comprehensive and long-term “Framework Agreement for Defence Cooperation” between Pakistan and Turkey, which was agreed by the visiting dignitary.

The President expressed satisfaction at Turkey’s cooperation for its submarine upgrade and acquiring of Super Mushak trainer aircraft from Pakistan by Turkey.

President Recep Tayyip Erdogan said that bilateral defence cooperation between the two countries would grow further in the coming days, adding that in that regard all necessary measures would be taken.

The two leaders agreed that Kashmir dispute should be resolved in accordance with the resolutions of the United Nations.

Expressing concern over human rights violations in Indian Occupied Kashmir, President Mamnoon Hussain called for an inquiry of these atrocities under the UN auspices.

He noted that bilateral trade between Pakistan and Turkey had declined during the last few years and emphasized the need to enhance it.

Agreeing to the suggestion, Turkish President stressed the need for joint ventures for enhancing bilateral trade and said soon there would be improvement in that regard.

The two leaders condemned terrorism in all its forms and manifestation and reiterated the resolve that Pakistan and Turkey would continue to cooperate with each other for elimination of terrorism.

He commended the resolve of Pakistani nation and armed forces in the fight against terrorism and hoped that peace would soon be completely restored in Pakistan.

On the occasion, President Mamnoon Hussain proposed to celebrate the 70th year of Pakistan-Turkey diplomatic relations in a befitting manner through exchange of high-level visits, issuance of joint commemorative stamps and cultural exchanges to which Turkish President agreed.

He apprised his Turkish counterpart about developments related to China-Pakistan Economic Corridor (CPEC) and said that this mega project would be a source of progress and stability in South Asia, Central Asia and Middle East.

President of Turkey Recep Tayyip Erdogan expressed pleasure at fast-paced development of the CPEC and said Turkey believed that the project would become a source of international peace and stability.

After the banquet, Pakistan Army bands played popular tunes of both countries which were appreciated by President Recep Tayyip Erdogan, his delegation and other guests.