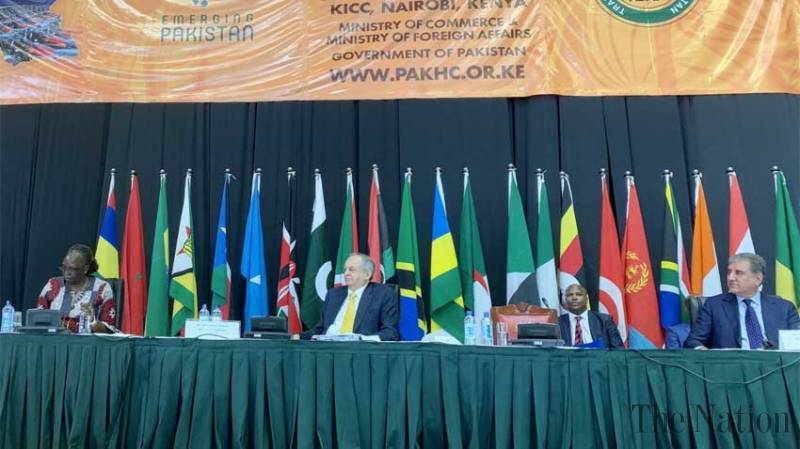 Pakistan and Africa have deeply imbedded relations in history since the period of anti-colonial melees because both the States were British colonies. After getting independence Pakistan provided material, ethical and emotional assistance to Algeria, Kenya, Sudan, Zimbabwe, South Africa, Tanzania, Namibia, Morocco, Libya, Egypt and Nigeria. Moreover, during the times of need and predicaments Pakistan and Africa’s United Nation peacekeeping missions have been at pole positions. Pakistan has not only contributed in strengthening the institutional development in Africa but also have made them audible to the international community. Because of heavily imposed restrictions on Africa by the Commonwealth of Nations, Pakistan and Africa failed to form official consular relationships up till the year of 1994. Pakistan’s exports to Africa have been comparatively less in the sectors of textiles, leather, cotton and various fabrics. Pakistan’s presence and influence, having only 13 resident missions in 54 African countries, is very limited so are country visits. But it should not be neglected that Pakistan singularly holds an honor of extraordinary input to “Blue Berets” for United Nation peacekeeping forces to serve in Rwanda, Burundi, Liberia, the Democratic Republic of Congo, Sudan and Sierra Leone.

During the initial months of the year 2019, adviser to Prime Minister for Commerce and Investment Abdul Razak Dawood mentioned, in the conference entitled “Engage Africa”, that through operative policies Pakistan can double its trade with Africa in the sectors of rice, engineering, foods, electronic equipment, pharmaceutical products, sports items, surgical instruments and cutlery in next six years that can boost the annual current trade volume of $4.28 billion. He also stated that Pakistan should not miss this great opportunity which can hike GDP from $2.4 trillion to $29 trillion. While addressing the same conference, foreign minister to Pakistan Shah Mehmood Qureshi discussed that Pakistan is aiming to increase both political and military cooperation with these States for which about 700 diplomatic officials are under training in Islamabad. Currently the trade between Pakistan and Africa stands at $3 billion which can be taken up to $4 billion through increased trade volume.

Keeping in view the potential and importance of African continent, foreign minister Shah Mehmood Qureshi visited Africa in efforts to boost economic cooperation, trade ties and to reaffirm momentous ties under Pakistan’s “Look Africa” policy initiative. On January 30th and 31st of the year 2020, “Pakistan-Africa Trade Development Conference” was jointly held by Ministries of Commerce and Foreign Affairs, Government of Pakistan in Nairobi. The visit was mainly focused on holding meetings and discussing ways and means to explore and enhance trade with Kenyan leadership, Cabinet Secretaries for Foreign Affairs & International Trade, African Community and Northern Corridor Development, Transport and Ports, as well as for Trade, Industry and Cooperatives.

Pakistan’s “Look Africa” policy initiative can turn out to be one of the fastest routes to economic cooperation and growth which will also generate employment opportunities in both States to help reduce poverty. To serve the purpose Pakistan has reached out to the Southern African Customs Union, Economic Community of West African States and East African Community to discuss trade covenants and possible prospects that exist under the African Continental Free Trade Agreement. The integration of Pakistan and Africa will establish a connectivity hub providing Government-to-Government and Business-to-Business interface out-setting win-win avenues for both. This initiative will only work the best when the private sector will recognize the government’s efforts of being a facilitator and take tangible steps to make the most out of it. Pakistan has and still can play a vital role in maintaining peace in African continent through the United Nations. Pakistan and Africa are both facing poverty, hunger and unemployment which is one the biggest reasons to honor this initiative basing upon political will and respect for each other.