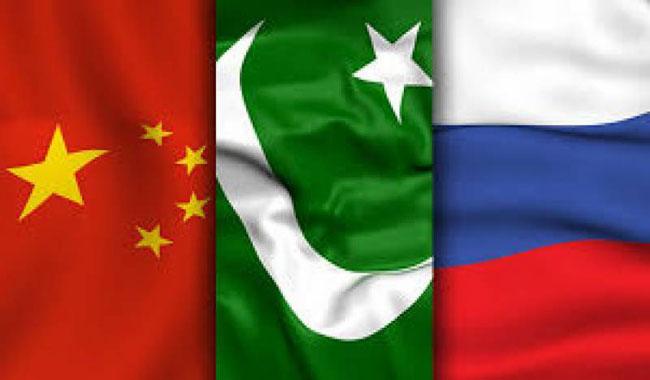 Pakistan has received assurances of support from two regional powers after a humiliating tweet by US President Donald Trump.

Diplomatic sources told The Nation that alongside the vocal support from China , Pakistan had received telephonic assurances from Russia that Pakistan should not consider itself “isolated”.

“The contacts with Russia after Trump’s statement have been encouraging. They support our view and are standing with us,” said a senior official at the foreign ministry who remains in contact with Moscow.

He added: “Russia is willing to enhance the bilateral ties and engage further on defence. We have two big powers with us as Washington attempts to pressurise Pakistan .”

Last month, Russian Consul General in Karachi Dr Aleksandr Khozin had said Pakistanand Russian relations were getting stronger and both the countries shared views on peace in the region.

“The issue of Afghanistan and peace in that country was also discussed in the meeting,” he added.

As the year 2018 started, Trump tweeted: “The United States has foolishly given Pakistan more than 33 billion dollars in aid over the last 15 years, and they have given us nothing but lies and deceit, thinking of our leaders as fools. They give safe haven to the terrorists we hunt in Afghanistan, with little help. No more!”

Pakistan responded by saying Trump’s “no more” mantra was worthless as Islamabad was not prepared to “do more”.

Asked to comment on Trump’s statement, Chinese foreign ministry spokesperson Geng Shuang said: “Pakistan has made enormous efforts and sacrifices in the fight against terrorism and has made very outstanding contribution to the global cause of counter terrorism. The international community should acknowledge that.”

Shuang added: “China and Pakistan are all-weather partners. We stand ready to promote and deepen our all-round cooperation so as to bring benefits to the two sides.”

China was glad to see Pakistan engaging in international cooperation, including counter terrorism, on the basis of mutual respect so as to contribute to regional peace and stability, Shuang said.

During the first-ever trilateral meeting of the foreign ministers of China , Pakistan and Afghanistan in Beijing last week, Beijing announced plans to extend the CPEC to Afghanistan, which shares close ties with India.

Asked whether Trump’s criticism would affect China’s efforts to bring peace between Pakistan and Afghanistan, Shuang said “We believe as neighbours, China , Pakistanand Afghanistan are closely linked not only geographically but also in terms of common interests. It is natural for us to enhance communication and exchanges.”

He said that during the December 26 trilateral meet, the three countries “reached a lot of consensus” on cooperation. This included enhanced cooperation on counter-terrorism and fighting against terrorism in all forms and manifestations. “The parties will enhance cooperation in this regard,” Geng said.

China is investing close to $57 billion under the China-Pakistan Economic Corridor (CPEC) project, which speaks volume about the two nations’ friendship.

Pakistan had also handed over control of Gwadar Port to China’s state-owned ChinaOverseas Ports Holding in February 2013. Gwadar Port – built by Chinese workers and opened in 2007 -is undergoing a major expansion since.

Officials at the foreign ministry said Pakistan was “happy” to get the “customary support” from China . “This is what we expect from China . This makes our relationship stronger,” said an official.