Russia suspends cooperation with U.S. in Syria after missile strikes 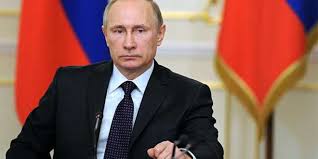 Furious Vladimir Putin has called the US airstrikes on Syria an ‘illegal act of aggression’ and suspended a deal to avoid mid-air clashes with American fighter jets over the war-torn country.

The Russian President warned of grave damage to relations between Washington and Moscow after 60 Tomahawk missiles were fired at al-Shayrat airbase near Homs.

Syrian Army officials described the attack as an act of ‘blatant aggression’, saying it had made the US ‘a partner’ of ISIS, the ex-Nusra Front and other ‘terrorist organisations’.

The US insists the base was used by Syrian President Bashar al-Assad’s forces to launch a deadly chemical attack that killed 80 on Tuesday.

America used a special military-to-military hotline to warn Russia it was launching an airstrike on a Syrian air base about 30 minutes in advance – but the Trump administration did not ask Moscow for permission. It is likely Russia alerted the Syrians about the incoming strikes but this has not been confirmed.

Syria’s state agency SANA claimed that the missiles killed nine civilians, including four children, even though the bombarded the airbase in the middle of the night.

Putin said the missile strikes broke international law and has halted an agreement with the US aimed at avoiding clashes between their forces in the skies over Syria.

This morning, he diverted a warship to protect the Syrian coast and vowed to bolster Bashar al-Assad’s missile defences against further US strikes as fears grew the crisis could topple into war between Russia and the West.

The Russian President has immediately sent his Admiral Grigorovich frigate – armed with cruise missiles and a self-defence system – from the Black Sea to dock in Syria.

It will pass through the east Mediterranean waters where the USS Ross and USS Porter fired the 59 Tomahawk missiles that pounded Assad’s al-Shayrat military airfield near Homs in the early hours of Friday.

The Russian leader regarded the U.S. action as ‘aggression against a sovereign nation’ on a ‘made-up pretext’ and as a cynical attempt to distract the world from civilian deaths in Iraq, Putin’s spokesman Dmitry Peskov was cited as saying.

‘We call upon the UN Security Council to hold an extraordinary meeting to discuss the situation,’ the foreign ministry in Moscow said in a statement, calling the strike a ‘gross… violation of international law.’

Two U.S. warships fired 59 cruise missiles from the eastern Mediterranean Sea at the Syrian airbase controlled by forces of President Bashar al-Assad in response to a poison gas attack in a rebel-held area on Tuesday, US officials said.

‘Years of previous attempts at changing Assad’s behaviour have all failed and failed very dramatically,’ Trump said as he announced the attack from his Florida resort, Mar-a-Lago, where he was meeting Chinese President Xi Jinping.

The Russian propaganda machine quickly clicked into gear and claimed the airstrike had been ineffective.

Politicians in Russia also also claimed the news of a chemical attack was ‘fake’ in order to provide a pretext for military action.

Elsewhere, Syrian state media claimed four children were among nine civilians killed – even though the US strike bombarded the airbase in the middle of the night.

The Kremlin claimed that the Syrian armed forces do not possess chemical weapons, saying this has been confirmed by Organization for the Prohibition of Chemical Weapons (OPCW) .

‘The fact of the destruction of all chemical weapons stockpiles has been recorded and confirmed by the OPCW, a specialized UN unit,’ said Peskov.

‘At the same time, in Putin’s opinion, total disregard for the use of chemical weapons by terrorists only drastically aggravates the situation.’

He said: ‘Putin also sees the attacks on Syria by the US as an attempt to divert the international community’s attention from the numerous casualties among civilians in Iraq.’

The spokesman warned: ‘This move by Washington is causing substantial damage to Russian-US relations, which are in tatters as it is.’

The UN-backed ceasefire taskforce on Syria will meet today at Russia’s request, the United Nations’ special envoy for Syria said, after the United States struck a regime airbase overnight.

‘An emergency meeting of the ISSG (International Syria Support Group) Ceasefire Taskforce will take place later today,’ the office of special envoy Staffan de Mistura said. ‘The meeting, which will be chaired by the Special Envoy, was requested by the Russian Federation co-chair and agreed upon by the United States co-chair.’

Trump ordered the strikes a day after he blamed Assad for this week’s chemical attack, which killed at least 70 people, many of them children, in the Syrian town of Khan Sheikhoun. The Syrian government has denied it was behind the attack.

The Tomahawk missiles were launched from the USS Porter and USS Ross around 8:40 p.m. EDT (0040 GMT on Friday), striking multiple targets – including the airstrip, aircraft and fuel stations – on the Shayrat Air Base, which the Pentagon says was used to store chemical weapons.

At least four Syrian soldiers, including a senior officer, were killed in the attack, which almost completely destroyed the base, the Syrian Observatory for Human Rights said.