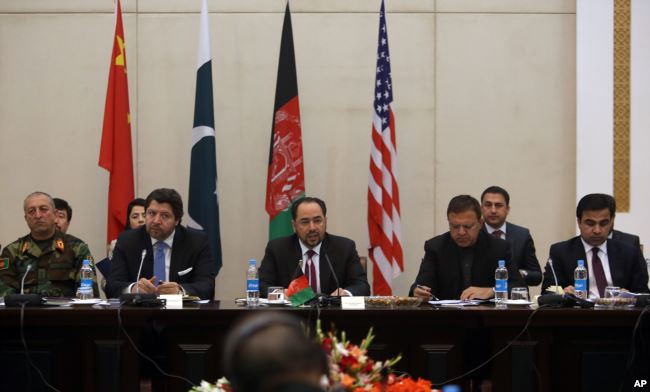 Russia will host a regional conference on Afghanistan later this month to discuss efforts aimed at settling the protracted Afghan conflict and containing “spillover effects” of Islamic State terrorists trying to get a foothold in the war-ravaged nation. Moscow organized a tripartite meeting on the subject late December where it only invited Pakistan and China. The dialogue prompted strong reaction and protest from the Afghan government for being left out of it.

Russian Foreign Minister Sergei Lavrov said Tuesday Afghanistan now has been formally invited to another round due in mid-February where senior officials from China, Iran, India and Pakistan also will be in attendance. Lavrov made the statement in Moscow after talks with visiting Afghan counterpart, Salahuddin Rabbani, saying most of the countries already have confirmed their participation. IS emerged in Afghanistan about two years ago, and has been conducting extremist attacks in the country and in parts of Pakistan under its regional name of Islamic State of Khorasan Province (ISKP). But the terrorist group has not been able so far to extend its activities beyond few districts in eastern Afghan province of Nangarhar, which borders Pakistan.

The violent IS campaign has worried Pakistan, which shares a nearly 2,600-kilometer border with Afghanistan. Russia defends its active Afghan diplomacy, saying continued fighting between Afghan forces and the Taliban would allow IS to extend its activities to northern Afghan regions in its bid to infiltrate bordering Central Asian republics, and ultimately undermine Moscow’s national security interests. “Russia is much more concerned about the growth of IS in Afghanistan because they regard IS as a threat. So, they don’t want this force [IS] to knock at the Central Asian and Caucasian doors,” said Pakistani prime minister’s foreign policy advisor Sartaj Aziz while speaking to VOA.

He added that Moscow apparently is trying to form a regional platform to prevent Afghan instability from spilling over into neighboring countries. “So, they need a regional approach and a cooperative approach to make sure that this turmoil does not go in their sphere of influence so that is their main motivation and that is our priority also to make sure that terrorism does not spread from this area to other parts,” said Aziz. Pakistani authorities maintain that IS militants operating in Afghan border regions have been behind recent deadly attacks in their country.

Advisor Aziz emphasized the need for seeking an urgent negotiated settlement of the Afghan conflict by encouraging peace talks between the Taliban and the Kabul government. He insisted that continuation of hostilities will only fuel instability in Afghanistan. Speaking Tuesday in Moscow, Foreign Minister Lavrov also underscored Russia’s support for involving the Taliban in peace talks to end the Afghan war. “We have confirmed our common stance that Taliban should be involved in a constructive dialogue in keeping with the criteria contained in the U.N. Security Council resolutions,” Russian media quoted Lavrov as saying.

The Taliban has shown no willingness to engage in peace talks with the Afghan government, and instead has expanded its insurgent activities across the country, capturing more territory and inflicting more casualties on Afghan security forces, as well as civilians. The United Nations also has documented a sharp increase in IS attacks against civilians, particularly against the Shia Muslim religious minority in Afghanistan last year.

Russian officials maintain IS militants fleeing counter-terrorism operations in Syria and Iraq are seeking refuge in Afghanistan, and they are using the conflict-hit country to expand their extremist activities to neighboring countries. China and Iran also have expressed similar concerns