Saudi Arabia, Iran, others react to US strike in Syria 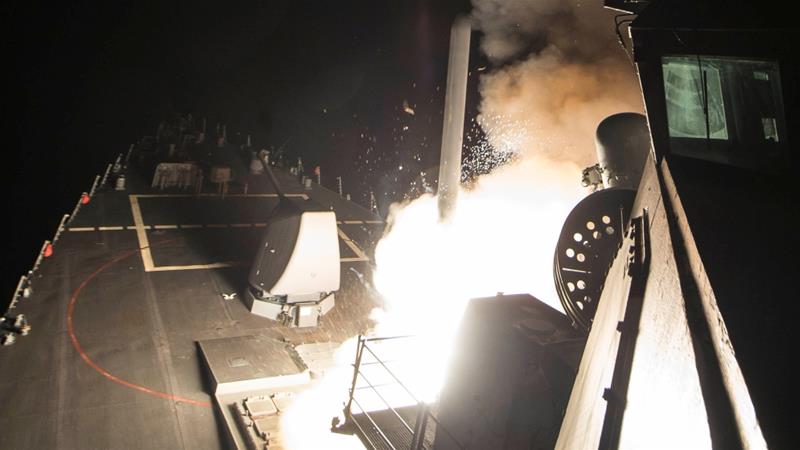 The United States had fired nearly 60 Tomahawk missiles at a military airfield in Syria, the first direct military action Washington has taken against Syrian government forces in the six-year-old conflict.

The US said the missiles on Friday severely damaged or destroyed Syrian aircraft and support infrastructure and equipment at the airfield.

US President Donald Trump  said he ordered the strikes against Shayrat air base in Homs province, saying it is believed that a suspected gas attack on a town in Idlib province had been launched from there. Trump said he acted in America’s “vital national security interest”.

World and regional leaders and countries were quick to react to the news.

Russia, which has been bombing rebel-held areas in Syria in support of President Bashar al-Assad since September 2015, condemned the strikes, saying Washington’s action would “inflict major damage on US-Russia ties”, according to Russian news agencies.

In its first public response to the attack, the Kremlin labelled the US move as “aggression against a sovereign state in violation of international law”.

In contrast, Saudi Arabia said it “fully supports” the strikes, adding that it was a “courageous decision” by President Donald Trump in response to the alleged use of chemical weapons against civilians in the town of Khan Sheikhoun, in northwestern Syria

“A responsible source at the foreign ministry expressed the Kingdom of Saudi Arabia’s full support for the American military operations on military targets in Syria, which came as a response to the Syrian regime’s use of chemical weapons against innocent civilians,” a statement carried by state news agency SPA said.

The statement said it holds the government of Syrian President Bashar al-Assad responsible for the deaths of dozens of civilians in in Khan Sheikhoun.

Iran, also an Assad ally, said it strongly condemned the missile strikes against the Syrian army’s Shayrat air base.

“Iran strongly condemns any such unilateral strikes … such measures will strengthen terrorists in Syria … and it will complicate the situation in Syria and the region,” ISNA news agency quoted Foreign Ministry spokesman  Bahram Qasemi as saying.

Turkey, which hosts three million Syrian refugees, said it views the US missile strikes positively and called for the establishment of a no-fly zone, as well as safe zones, in Syria.

“What happened in Idlib on Tuesday proved again that the bloody Assad regime show complete disregard for the prospect of a political transition and efforts to enforce the ceasefire,” read a statement by presidential spokesman Ibrahim Kalin.

“The destruction of Sharyat airbase marks an important step to ensure that chemical and conventional attacks against the civilian population do not go unpunished.”

Israeli Prime Minister Benjamin Netanyahu said he supports the “strong and clear message” sent by the US strikes.

The Israeli military said it had been informed in advance of the attack.

“In both word and action, President (Donald) Trump sent a strong and clear message today that the use and spread of chemical weapons will not be tolerated,” a statement from Netanyahu’s office said.

“Israel fully supports President Trump’s decision and hopes that this message of resolve in the face of the Assad regime’s horrific actions will resonate not only in Damascus, but in Tehran, Pyongyang and elsewhere.”

“US strikes show needed resolve against barbaric chemical attacks. EU will work with the US. to end brutality in Syria,” Tusk wrote on his Twitter account.

Britain said the US action was an appropriate response to the “barbaric chemical weapons attack” launched by the Syrian government, according to a spokesman for Prime Minister Theresa May.

Italy also gave its support, saying it was a suitable response to Syrian aggression.

The strike was “a commensurate response … and a signal of deterrence against the risks of further use of chemical weapons by Assad”, Foreign Minister Angelino Alfano said in a statement.

Australian Prime Minister Malcolm Turnbull also weighed in, saying that he supported the strike, calling it a “proportionate and calibrated response”.

In a televised statement, he also called on Russia to play its part in bringing peace to Syria.