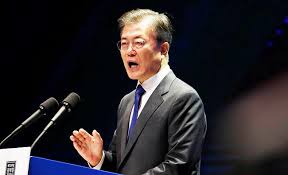 South Korean President Moon Jae-in has said US and South Korean policies are aligned on North Korea and promised there “will be no war on the Korean peninsula ever again.”

Moon, who took office in May, held a news conference Thursday to mark the first 100 days of his presidency.
During the nationally broadcast event, he said US President Donald Trump had assured South Korea he would consult with them before making any military decisions on North Korea.
“Against North Korea, even with extreme pressure, it has to be solved peacefully and our opinion and US opinion about this matter is not different,” Moon said.
The South Korean leader also said North Korea’s development of nuclear weapons technology was “nearing” a red line, which he described as “completing an ICBM and weaponizing it with a nuclear head.”
North Korea claims it has successfully miniaturized a nuclear weapon. While some experts believe it may have the technology, others caution that even if it doesn’t, North Korea should be taken at its word.
“If North Korea provokes again, it will face with much harsher sanction and won’t stand it in the end. I want to warn North Korea to do no more dangerous gambling,” added Moon.

‘We will block war by all means’

Moon’s comments about averting war echoed similar statements he made Tuesday that only South Korea could give consent to initiate any conflict with the North.
“The government, putting everything on the line, will block war by all means,” Moon said.
His comments followed Mattis’ threat that it would be “game on” if North Korea carried out its threat to fire missiles toward the US island territory of Guam.
Pyongyang said Tuesday it had finalized a plan to fire four missiles less than 25 miles off Guam but state media said leader Kim Jong Un would wait to assess the US’ next move before giving launch orders.
The US and South Korea are due to start military games on Monday, August 21, which is considered the next potential flashpoint in the dispute.

Moon has repeatedly stressed that he is open to dialogue with North Korea, if conditions are met and North Korea temporarily halts its nuclear program.
He was a supporter of the “Sunshine Policy,” an attempt to improve relations between the two Koreas from 1998 to 2008, and was chief of staff to former South Korean President Roh Moo-hyun.
Speaking at his swearing-in ceremony in May, Moon promised to “resolve the security crisis as soon as possible.”
“If it is necessary, I will fly immediately to Washington and also visit Beijing and Tokyo,” he said.
“Under the right conditions, I will also go to Pyongyang. For peace on the Korean Peninsula, I will do everything that I can do.”
Soon after coming to office he delayed the deployment of the US-developed THAAD anti-missile system.
Moon’s policy on Pyongyang came in for criticism from his rivals, particularly Hong of the Liberty Korea Party and Ahn of the People’s Party, who both touted tougher lines on North Korea.
Courtesy: CNN