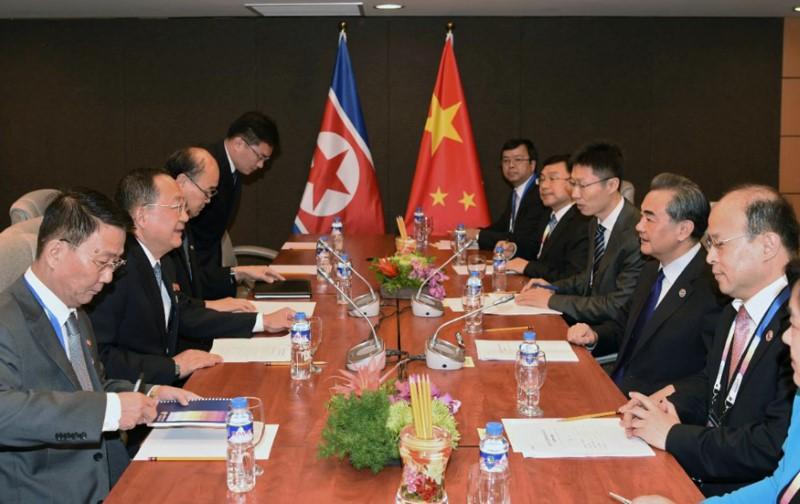 Foreign ministers of Southeast Asia and China adopted on Sunday a negotiating framework for a code of conduct in the South China Sea, a move they hailed as progress but seen by critics as tactic to buy China time to consolidate its maritime power.

The framework seeks to advance a 2002 Declaration of Conduct (DOC) of Parties in the South China Sea, which has mostly been ignored by claimant states, particularly China, which has built seven manmade islands in disputed waters, three of which are equipped with runways, surface-to-air missiles and radars.

All parties say the framework is only an outline for how the code will be established but critics say the failure to outline as an initial objective the need to make the code legally binding and enforceable or have a dispute resolution mechanism, raises doubts about how effective the pact will be.

Chinese Foreign Minister Wang Yi said the adoption of the framework created a solid foundation for negotiations that could start this year, if “the situation in the South China Sea is generally stable and on the premise that there is no major interference from outside parties.”

He told reporters there had been “really tangible progress” so there was “a need to cherish momentum on the South China Sea”.

Signing China up to a legally binding and enforceable code for the strategic waterway has long been a goal for claimant members of the Association of South East Asian Nations (ASEAN), some of which have sparred for years over what they see as China’s disregard for their sovereign rights and its blocking of fishermen and energy exploration efforts.

Beijing insists its activities are for defense purposes, in areas it considers its waters. Malaysia, Taiwan, Brunei, Vietnam and the Philippines, however, all claim some or all of the South China Sea and its myriad shoals, reefs and islands.

Some critics and diplomats believe China’s sudden interest in the code after 15 years of delays is to drag out the negotiating process to buy time to complete its strategic objectives in the South China Sea, through which more than $3 billion of ship-borne trade passes annually.

Opponents also say it is being pushed through at a time when the United States, long seen as a crucial buffer against China’s maritime assertiveness, is distracted by other issues and providing no real clarity about its security strategy in Asia, thus weakening ASEAN’s bargaining position.

The framework has not been made public but a leaked two-page blueprint seen by Reuters is broad and leaves wide scope for disagreement.

It urges a commitment to the “purposes and principles” of the United Nations Convention on the Law of the Sea (UNCLOS) but does not specify adherence to it, for example.

A separate ASEAN document, dated May and seen by Reuters, shows that Vietnam pushed for stronger, more specific text in the framework, wanting mention of a dispute resolution mechanism and respecting “sovereignty, sovereign rights and jurisdiction”.

Several ASEAN countries, including Vietnam and the Philippines, have said they still favour making the code legally binding, something experts say China is unlikely to agree to.

Wang said he would not try to anticipate what the code will comprise, but said whatever is signed must be adhered to.

Robespierre Bolivar, foreign ministry spokesman of host Philippines, said the adoption of the framework symbolized the commitment to creating a “substantive and effective” code.