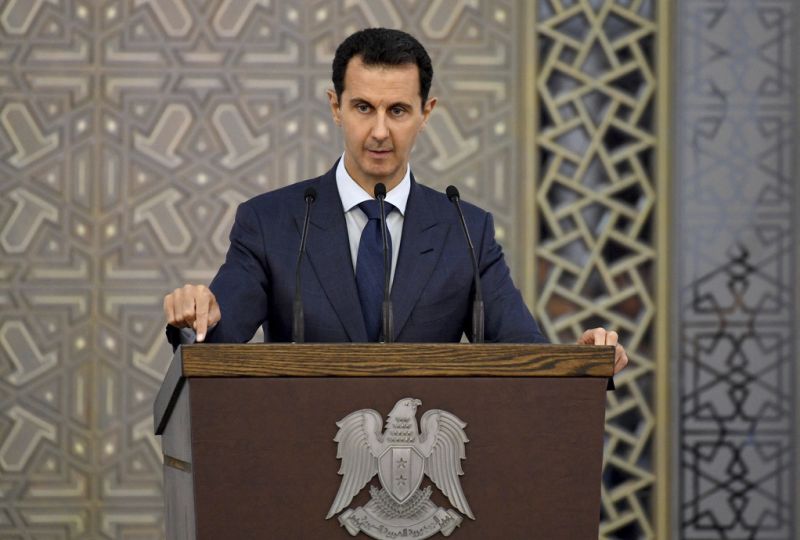 The Syrian president, Bashar al-Assad, has railed against the west, saying any security cooperation with western nations or the reopening of their embassies would not happen until they cut ties with opposition and insurgent groups.

Shortly after Assad gave his speech, a shell hit the first international fair in the country since the war began six years ago, killing and wounding several people.

Assad’s defiant comments come at a time when his troops and pro-Iranian militia are gaining ground across the country under the cover of Russian airstrikes. Many countries have ceased calling for him to step down.

Speaking in front of dozens of Syrian diplomats in Damascus, Assad praised Russia, Iran, China and Lebanon’s Hezbollah for supporting his government during the conflict. He said Syria would look east when it came to political, economic and cultural relations.

“The direct support of our friends, politically, economically and militarily, made our advance on the ground greater and the losses of war less. Therefore, they are our partners in these achievements on the road to crush terrorism,” Assad said.

“Let’s be clear. There will be no security cooperation nor opening of embassies or even a role for some countries that say that they want to play a role in ending the crisis in Syria before they clearly and frankly cut their relations with terrorism. At that point maybe we can speak about opening embassies.”

Following months of steady military advances, Syria’s government has sought to portray itself as the victor in a war that is winding down, and is looking ahead to reconstruction. The Syrian president said his country’s economy was turning to growth again “at a very slow pace, although we are under an almost complete embargo”.

The government had billed the international trade fair, which opened three days ago, as a victory and a sign of renewed confidence in the war-torn nation.

The Mortar News in Damascus Facebook page, which tracks violence in the capital, said the shell hit the entrance of the fair, killing four people and wounding four others.

The Britain-based Syrian Observatory for Human Rights, an opposition-run group that reports on both sides of the conflict, said the shell killed five people and wounded 11 but did not say who was behind the attack.

The state-run news agency said the shelling inflicted casualties but gave no further details. It blamed the rebels in the suburbs of the capital, saying they fired the shell in violation of a truce reached earlier this month in the eastern suburbs of Damascus known as eastern Ghouta.