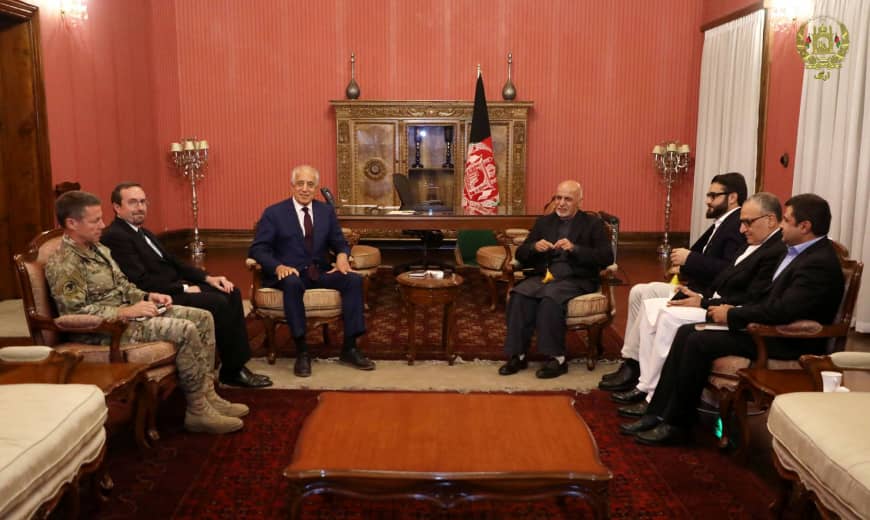 US President’s Special Representative for Afghan reconciliation, Zalmay Khalilzad had a prolonged visit of the Asian region, recently, and ended it up at a high note by having marathon sessions with the Taliban’s political office at Doha, Qatar. In all his previous and the latest trips, he has been registering strong observations by the Capitals he is visiting, including Kabul that to not abruptly exit Afghanistan. Although his boss (Donald Trump) wishes otherwise as he wants to pack up and be off the hook. Because in pure business terms, bills of involvement in Afghanistan have so far exceeded a one-trillion-dollar mark with exponential cost of American soldiers’ lives. While in return, nothing is at hands as dividends.

While Zalmay Khalilzad was flying from Delhi to Beijing during his visit, the Taliban announced to end peace talks with him because he keeps asking regional powers to coerce them for a sitting with Kabul government for peace talks rather than negotiations with the US. The statement from Taliban was way too blunt in context of diplomacy, but it got its weightage and Zalmay Khalilzad relayed a message to see the Taliban’s Qatar office team, while this was at his itinerary.

Initially, it was driven hard that the rendezvous shall be Islamabad, when Zalmay Khalilzad was at the final leg of his journey to Pakistan. However, the Taliban flatly refused to see him in Islamabad as Afghan social media, electronic media and parts of the Kabul government were already inculcating amenably that Pakistan is having a big say over the Taliban and are driving them until now. So, to dispel that advertising, the Taliban emphatically refused to see him and announced officially that there stands no chance of meeting him at Islamabad. Later, it was decided to sit at Doha without the presence of any other country’s delegation, as was the case in previous meet ups when Pakistan, UAE and Saudi Arabia representatives also participated along the sidelines.

The talks at Doha had a clear head start as both sides had met in recent past, so the ice breaking phase along with exchanging goodwill gestures was already over. It was decided in principle that talks shall happen for three days and in course of lengthy sessions. But once they started, sessions after sessions made sure to prolong the talks and stretch it to six days. Talks revolved around talibans demand for exit of foreign forces from Afghanistan and in return for US demand that afghan soil shall never be used against any country, particularly USA. Insiders say that focus of the talks was zoomed over the demands put up by two sides and how meticulously to craft a strategy for it and once a strategy for such demands is written down in the form of a covenant, who shall be the guarantors of it along with United Nations. With these two demands in focus topics of exchange of prisoners, erasing of names of higher Taliban hierarchy from U.N blacklist, Taliban peace talks with Kabul government and complete cease-fire also occupied much of the time.

The Taliban kept on pressing Zalmay Khalilzad that US and NATO forces pull out from Afghanistan in coming 6 months’ time, while Zalmay was calling in for a phase-wise exit, saying within a year’s time frame by minutely analyzing the security situation on ground. Consequently, Zalmay Khalilzad was asking the Taliban relentlessly that once US and NATO troops starts pulling out, the Taliban leadership must initiate peace talks with the Kabul government. At this very note the Taliban team did not pay a heed, ducked it and kept on avoiding addressing this thorny point of discussion. Taliban inelasticity in this domain was of the reason that they were still not empowered by the Rehbari Shura (Guidance Council) to decide over this subject. Resultantly, the glitch was the real bone of contention for not issuing a joint communiqué, as planned, at the end of six days talk. As Zalmay Khalilzad was off the opinion that if the joint communiqué was to say that US and NATO forces are to exit phase wise from Afghanistan within a year’s time frame than it should also say that; simultaneously Afghan Taliban are going to begin peace talks with Kabul government.

The US team tried her best to end talks on a high note and take some concrete talking points out of it for her President’s upcoming state of union address. But eventually the reluctance of the Taliban to open talks with Kabul government fizzled out the desired results. The talks ended on a note that a future course of action is at sights, so let’s take a pause from here and resume talks by 25th of February 2019. On almost the very last phases of talks, the Taliban announced to send over its old guard and deputy to their leader on political front, Mullah Ghani Baradar to head their Qatar political office and lead negotiations onwards. By doing so, in future exchanges with US negotiating team Qatar political office of the Taliban is now completely empowered and it does not have to look back at the guidance council for consultations. As was in case to open talks with Kabul government or not.

From the exchanges at Doha, it is evidently clear that US and the Taliban are jelling along well for the time being and one can envisage a picture-perfect scenario within a year’s time frame, where Afghanistan is a no-go area for international terrorists and US / NATO forces exit makes Afghanistan look more sovereign than ever. But by calculating so, one grossly misses out that where the Afghanistan government stands in this envisioned scenario. The onus of burden lies at US to care for the Afghan government before it hammers out some sort of a settlement with the Taliban and leave. Accordingly, to cater for, Zalmay Khalilzad instead of flying straight to Washington after talks at Doha, flew towards Kabul. He sat with Afghan President Ashraf Ghani and did his best to allay his fears. Insiders did divulge from the meet that Ashraf is indeed under confident and jittery.  But Zalmay Khalilzad assured Ghanni that US won’t leave till talks between the Taliban and Kabul government start and get to a conclusive end.

All in all, the art of diplomacy is at his best and these talks holds too much of a learning for students of foreign policy as to how well one crafts his cards and plan them at the right moment. Goals of both parties are set and finally it’s dawned upon the world that US is in serious mood to exit Afghanistan. It shall also be kept in design that the ground reality is the factor that dictates and strengthens the interlocutors of talks at the table. As per that ground reality, it’s evident that both the Taliban and US negotiating teams are testing each other nerves. For now, all is well but indeed if it ends well.

The writer is an Afghan Expert