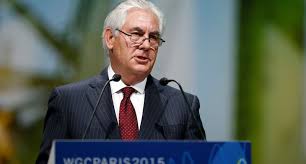 The reactions to statements by Secretary of State Nominee Rex Tillerson and the White House, that the U.S. would prevent China from accessing its own artificial islands in the South China Sea, show the difficulties foreign leaders and commentators have had in adjusting to the Trump administration. The reactions include an op-ed in the state-run China Daily saying: “Such remarks are not worth taking seriously because they are a mish-mash of naivety, shortsightedness, worn-out prejudices, and unrealistic political fantasies. Should he act on them in the real world, it would be disastrous.” The more hawkish Global Times warned “Tillerson had better bone up on nuclear power strategies if he wants to force a big nuclear power to withdraw from its own territories”

These statements reveal that those who made them or those for whom they speak still think that we are in a world in which a statement by the White House or the Secretary of State reflects a worked-out policy, and is the result of deliberations and careful wording. Instead, the world should now get used to a president and administration that speak first and (maybe) think later. President Donald Trump has already built a record of statements that reflect a momentary sentiment or peeve or imagined facts, but not a thought-out policy.

Moreover, these statements are all written on ice. As soon as the sun rises, they melt away and can be replaced not merely by some modification but by a rather different position altogether. Thus, one day Trump criticizes the intelligence community and accuses them of being behind a smear campaign against him. Next, he claims that the rift between him and the CIA was made up by the “dishonest” media. For much of the campaign, and even after the election, he criticized the Iraq War. Then, at his speech to the CIA, after saying we should have taken Iraq’s oil, he says “maybe we’ll have another chance.” One moment, he says that Japan, South Korea and Saudi Arabia should be allowed to develop nuclear weapons, but then only a few moments later he says: “Biggest problem, to me, in the world, is nuclear, and proliferation.” No one should be surprised if he states tomorrow that China can have all the islands it wants because protecting them would cost too much or some other random thought.

One further notes that the key foreign policy players Trump appointed do not agree with him and each other on the main issues at hand. Should the U.S. reduce its overseas entanglements and commitments and focus on America first or make new commitments and expand its existing commitments? In the latter case, should the U.S. treat the South China Sea islands as if they are territories captured by China and snapped away from U.S. allies, and are of major military importance, or should they been seen to be of little import? Until the Trump foreign policy team meets and has a chance to see if they can agree on at least the major contours of the policy they are to follow, one best not view the early swaggering statements as anything more than a declaration that “we are more aggressive than [former U.S. President Barack] Obama.”

Once the principal players get together, they will face the following facts: The main islands that are under discussion are the Spratly Islands, which are claimed by several other countries, including the Philippines, which filed a claim against China with the Permanent Court of Arbitration. The Court ruled that China’s artificial islands should only be considered rocks or low-tide elevations under the Law of the Sea, and thus that China is not entitled to the territorial waters that it claims. However, since then the Philippines elected a new president, Rodrigo Duterte. He reached an agreement with China that allows Philippine fishing boats to operate around a disputed shoal. Is the U.S. going to insist on using its forces to promote the rights that the Philippines no longer claims? And how would this be achieved? China is sending fisherman – not warships. Would the U.S. intercept them and send them to Gitmo? Fire at them?

As I see it, the islands are of very little military value. They are like broken-down aircraft carriers that are marooned and are sitting ducks which would be wiped out in a case of war in a matter of minutes. Tetsuo Kotani, who specializes in maritime security at the Japan Institute of International Affairs, notes that even with anti-ship defenses, military installations on disputed islands would duplicate capabilities that China already has in Hainan: “They’re basically just sending a political message. I’m not sure what other role those troops could play.”

There is another way to look at the world according to Trump. It is known as the madman theory of war. Accordingly, if one party acts irrationally, other more leveled-headed parties will yield. There is also considerable agreement that such a “policy” is a very risky one. Sooner or later, someone will not yield and a clash will ensue.

Granted, China is not ready to take the U.S. on militarily. Hence, China is extremely unlikely to try and do so if Trump’s administration really sends its warships to prevent China from accessing the contested islands. However, it has other ways to hit back, above all by indirectly helping North Korea to develop its missile and nuclear program.

One cannot but hope that, once the Trump foreign policy team starts meeting, it will realize that core U.S. interests do not lie in dealing with the South China Sea islands, but in working with China to curb the nuclear buildup of North Korea, climate change, and jihadists, and to build a stable and growing world economy.

Amitai Etzioni is a University Professor and Professor of International Relations at The George Washington University.