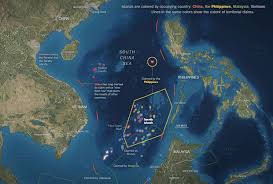 PM Modi has reached out to President of the Philippines Rodrigo Duterte, and said India would stand in support with ASEAN in the pursuit of a rules-based regional architecture.

The ministry of external affairs said India wants to continue to work closely with ASEAN in regional and international fora. India’s move is being perceived as an attempt to reach out to the Philippines and contain Chinese influence there.

Philippines, Vietnam, Taiwan, Malaysia and Brunei, are embroiled in a conflict with China over both island and maritime claims related to South China Sea. China has backed its expansive claims with island-building and naval patrols. Since a high proportion of the world’s trade passes through the South China Sea, there are many non-claimant nations that want the South China Sea to remain as international waters. The disputes include the islands, reefs and banks of the South China Sea, including the Spratly and Paracel islands, the various boundaries, including those in the Gulf of Tonkin.

The interests of the nations include retaining or acquiring the rights to fishing areas; the exploration of crude oil and natural gas, and the strategic control of important shipping lanes. There are fears that the area is becoming a flashpoint, with potentially serious global consequences.

PM Modi’s reference to the “rules-based regional architecture” in the Southeast Asian region indicates the apprehension that China is using its military might to settle territorial disputes in the South China Sea. The ministry said, “In his message to President Duterte, the PM observed that the ‘Act East Policy’ is a reflection of the importance we attach to our strategic partnership with Asean. He also reaffirmed India’s desire to deepen its engagement with ASEAN.”

India had earlier issued a statement saying states should “exercise self-restraint in the conduct of activities that could complicate or escalate disputes affecting peace and stability.”