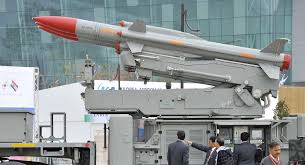 India has offered to supply indigenously developed Akash missile to Vietnam at a time when both countries are talking of China’s growing assertiveness in the Asia-Pacific region.

In fact, India has been helping Vietnam’s defence modernization when it is trying in confrontation with China on the South China Sea issue. It recently underwrote the costs of four patrol boats that it will build especially for Vietnam.

Akash is a medium range air-to-air missile system developed by India’s Defense Research and Development Organization (DRDO). Akash has the capacity to destroy targets up to 30 km away. Initially, India will supply the missiles off-the-shelf to Vietnam and could later into a joint production arrangement. Vietnam has been a close Indian ally in South East Asia and Prime Minister Narendra Modi’s visit to Vietnam last year saw both countries elevating their strategic partnership to a comprehensive strategic partnership. India-Vietnam defense ties are an important aspect of their strategic partnership. Earlier, India had offered to supply naval vessels to Vietnam as well as the BrahMos supersonic cruise missile. India also trains Vietnamese fighter pilots as both countries mainly operate Russian fighter jets.
Courtesy: The Sputnik News