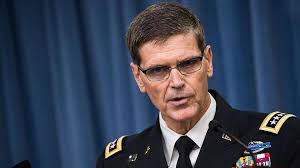 The chief of the U.S. Central Command visited Pakistan on Saturday, as President Donald Trump’s administration debated the future of its relations with Islamabad, part of a review of the war in neighbouring Afghanistan.

“Military cooperation, and even stronger cooperation with Pakistan, is very important, and we deeply appreciate the hospitality and willingness to continue an honest and open relationship,” Votel was quoted as saying by the embassy.

Votel stressed that Pakistani soil should not be used to plan or conduct terrorist attacks against its neighbours, the U.S. embassy said. The U.S. relationship with Pakistan has been under scrutiny in Trump’s lengthy review of a new strategy and troop levels in the fight against Taliban and other Islamist militants in Afghanistan.

U.S. officials say the Afghan Taliban are supported by elements of Pakistan’s military and top intelligence agency, a charge Islamabad denies, pointing to its own losses fighting Taliban-allied militants in North and South Waziristan.

Under one proposal, the United States would review whether to designate Pakistan a state sponsor of terrorism unless it pursued senior leaders of the Afghan Taliban and the allied Haqqani network, considered the most lethal Afghan extremist group, U.S. officials said.

Such a designation would trigger strong U.S. sanctions, including a ban on arms sales and an end to U.S. economic assistance.

Others argue that nuclear-armed Pakistan, which shares a border with Afghanistan, is too crucial to the war’s success to completely alienate. Washington and Islamabad have long had had a rocky relationship, including over 2011’s secret U.S. raid inside Pakistan that killed Al Qaeda leader Osama bin Laden, architect of the September 2001 attacks in the U.S.

It was the Taliban’s hosting of Al Qaeda in Afghanistan that led Washington to invade to topple the-then Afghan government in 2001.

In 2016 a U.S. drone strike killed Afghan Taliban leader Mullah Akhtar Mansour as he was traveling by car in southwestern Pakistan. Islamabad has denied sheltering either Bin Laden or Mansour.