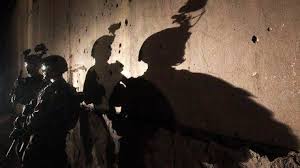 One American commando was killed and three others were wounded in a fierce firefight early Sunday with Qaeda militants in central Yemen, the military said on Sunday. It was the first counter-terrorism operation authorized by President Trump since he took office, and the commando was the first United States service member to die in the years long shadow war against Al Qaeda’s Yemen affiliate.

Members of the Navy’s SEAL Team 6 carried out the surprise dawn attack, and the military said that about 14 Qaeda fighters were killed during a nearly hourlong battle. A Qaeda leader — a brother-in-law of Anwar al-Awlaki, the American-born cleric and top Qaeda leader in Yemen, who died in a drone strike in 2011 — was believed to have been killed.

After initially denying that there were any civilian casualties, American officials said they were assessing reports that women and children had died in the attack.

The military’s Joint Special Operations Command had been planning the mission for months, according to three senior American officials. Obama administration aides had deliberated extensively over the proposed operation, weighing the value of any information that might be recovered against the risk to the Special Operations forces plunging into hostile territory. But administration officials ultimately opted to hand the decision on the mission to their successors.

Mr. Trump, who has vowed to increase pressure on militant groups worldwide, was quickly persuaded that the rewards were worth the gamble, and he authorized the mission last week, military officials said. Commandos waited for a moonless evening on Saturday to exploit their advantage of fighting at night.

As helicopter gunships and armed Reaper drones provided cover, the commandos carried out the attack against the home of the Qaeda leader in the rugged mountainous region of Bayda Province, a part of Yemen that has been a focal point of United States military operations over the past month. The main target was computer materials inside the house that could contain clues about future terrorist plots.

In a statement on Sunday, Mr. Trump called the raid “successful” and said that it had captured “important intelligence that will assist the U.S. in preventing terrorism against its citizens and people around the world.” He also lamented the loss of the American service member “in our fight against the evil of radical Islamic terrorism.”

The military’s Central Command said in an earlier statement on Sunday that “similar operations have produced intelligence on Al Qaeda logistics, recruiting and financing efforts.” In previous raids in Iraq, Syria and Somalia, commandos have recovered laptop computers, thumb drives and cellphones that yielded important information about militant leaders’ locations, activities and associates.

A United States military aircraft helping with the operation experienced a “hard landing” near the site of the raid, resulting in injuries to two other service members, military officials said. That aircraft, identified by a senior American official as an Osprey that was evacuating the troops wounded in the firefight, was unable to fly after the landing and was deliberately destroyed by American airstrikes. The wounded troops and the Osprey’s crew were lifted to safety by another American aircraft.

American officials and analysts said the Qaeda leader who was believed to have been killed was Abdulrauf al Dhahab.

The raid took place in Yemen around the time that Mr. Trump was signing a directive in Washington on Saturday afternoon ordering Defense Secretary Jim Mattis to devise within 30 days a more aggressive plan to defeat the Islamic State.

The Islamic State was born from Al Qaeda’s branch in Iraq, but the two terrorist organizations are now sworn rivals not only in Iraq and Syria, but also in other hot spots like Yemen and Afghanistan, where both groups have affiliates.

Because Mr. Trump had been explicit about his intention to ask for the review to accelerate the fight against the Islamic State, also known as ISIS or ISIL, American military planners had begun drafting classified options to present to the new commander in chief. Some of those options, like pushing more authority to conduct strikes to commanders in the field or loosening restrictions designed to limit the risk to civilians, could also be applied to attacks against Qaeda fighters and Islamic State insurgents.

There were no immediate indications that the rules of engagement had been loosened for the mission in Yemen, military officials said. The Central Command’s statement did not elaborate on details of the raid or identify the commando who was killed.

A local resident who witnessed the raid, speaking by phone, said he had seen warplanes bombing several houses in the village around 2 a.m. Sunday. The man said he had seen at least three buildings being struck before he fled. He did not want to be identified because he feared that speaking out would endanger his life.

A Yemeni government official in Bayda Province said the targeted buildings belonged to the Dhahab family, which is known for its ties to Al Qaeda. Two male members of the family have been killed in drone strikes over the past two years.

The Yemeni official said that at least eight women and seven children, ages 3 to 13, had been killed in the raid. Qaeda supporters said that Mr. Awlaki’s young daughter was among the dead and denied that any senior Qaeda leaders had been killed, according to the SITE Intelligence Group, which monitors extremist communications.

Faisal Mohamed, a Bayda official whose two sons witnessed the attack, said it severely damaged a school, a health facility and a mosque.

“I was on the way back to town when they called and said that there were Americans everywhere, so I knew I should not go,” Mr. Mohamed said by phone from nearby Marib Province. “My kids told me that the sky was crowded with helicopters and that they saw people jumping out of planes.”

“The last thing they said to me was that the whole town is devastated now,” Mr. Mohamed said.

Just over a week ago, United States drone strikes killed three other men suspected of being Qaeda operatives in Bayda Province, the first such killings reported in the country since Mr. Trump assumed the presidency.

Al Qaeda in the Arabian Peninsula, the group’s branch in Yemen, has long been seen by American intelligence and counterterrorism officials as among the most dangerous branches of the global terrorist network, and the one posing the most immediate threat to United States territory. The group’s leaders have sought in at least three cases to detonate bombs hidden aboard American commercial jetliners. All of those plots were thwarted.

The raid on Saturday night was the latest in a series of Special Operations drone strikes and ground attacks in Yemen in recent years.

In November 2014, helicopter-borne Special Operations commandos and Yemeni troops rescued eight hostages being held in a remote part of eastern Yemen by Al Qaeda’s affiliate there. After landing, the commandos hiked some distance in the dark to a mountainside cave, where they surprised the militants holding the captives.

A month later, in December 2014, United States commandos stormed a village in southern Yemen in an effort to free an American photojournalist held hostage by Al Qaeda. But the raid ended in tragedy, with the kidnappers killing the journalist and a South African held with him.