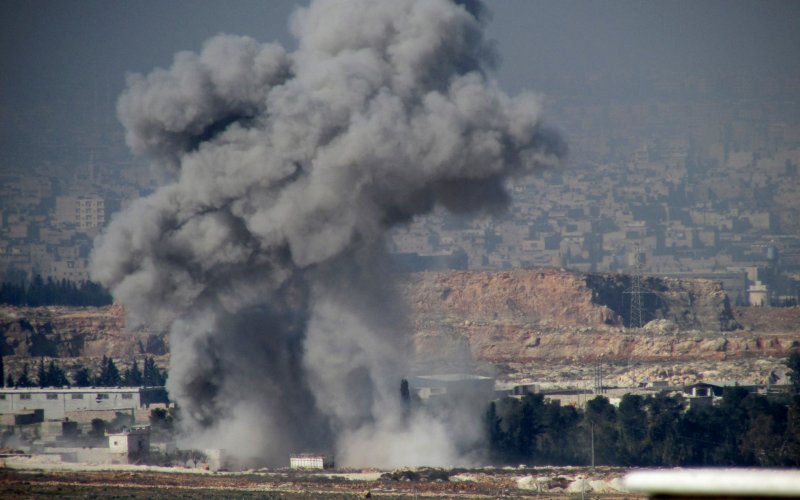 The U.S. military launched 59 cruise missiles at a Syrian military airfield late on Thursday, in the first direct American assault on the government of President Bashar al-Assad since that country’s civil war began six years ago.

The operation, which the Trump administration authorized in retaliation for a chemical attack killing scores of civilians this week, dramatically expands U.S. military involvement in Syria and exposes the United States to heightened risk of direct confrontation with Russia and Iran, both backing Assad in his attempt to crush his opposition.

A statement by Syria’s military said the U.S. “aggression” had killed at least six people and indirectly aided militant factions such as the Islamic State by weakening Syrian forces. Separately, Syria’s state news agency SANA reported that at least nine civilians, including four children, were killed near the air base. Neither report could be independently verified.

In Moscow, Russia announced it was pulling out of a pact with Washington to share information about warplane missions over Syria, where a U.S.-led coalition is also waging airstrikes on Islamic State targets.

Russian President Vladi­mir Putin called for an immediate meeting of the U.N. Security Council and his spokesman, Dmitry Peskov, called the U.S. missile strikes “violations of the norms of international law, and under a far-fetched pretext.”

But President Trump said the strike was in the “vital national security interest” of the United States and called on “all civilized nations to join us in seeking to end the slaughter and bloodshed in Syria. And also to end terrorism of all kinds and all types.”

“We ask for God’s wisdom as we face the challenge of our very troubled world,” he continued. “We pray for the lives of the wounded and for the souls of those who have passed and we hope that as long as America stands for justice then peace and harmony will in the end prevail.”

The missiles were launched from two Navy destroyers — the USS Ross and USS Porter — in the eastern Mediterranean. They struck an air base called Shayrat in Homs province, which is the site from which the planes that conducted the chemical attack in Idlib are believed to have originated. The targets included air defenses, aircraft, hangars and fuel.

The U.S. military said initial indications were that the strike had “severely damaged or destroyed Syrian aircraft and support infrastructure.”

Syrian state TV said a U.S. missile attack hit a number of military targets inside the country, calling the attack an “aggression,” according to the Associated Press.

U.S. officials said the Russians, who maintain significant forces in Syria, were given advance warning of the strike. There is a Russian military area at the base that was hit, but the U.S. took precautions not to strike that area, according to Navy Capt. Jeff Davis, a Pentagon spokesman.

In comparison, the start of the Iraq war in 2003 saw the use of roughly 500 cruise missiles and 47 were fired at the opening of the anti-Islamic State campaign in Syria in 2014.

The attack may put hundreds of American troops now stationed in Syria in greater danger. They are advising local forces in advance of a major assault on the Syrian city of Raqqa, the Islamic State’s de facto capital.

The decision to strike follows 48 hours of intense deliberations by U.S. officials, and represents a significant break with the previous administration’s reluctance to wade militarily into the Syrian civil war and shift any focus from the campaign against the Islamic State.

The U.S. Central Command has had plans for striking the Syrian government for years and currently has significant assets in the region, enabling a quick response once a decision was made.

While the Obama White House began operations against the Islamic State in 2014, it backed away from a planned assault on Syrian government sites a year earlier after a similar chemical attack on Syrian civilians.

Tuesday’s apparent nerve gas attack in northern Idlib, with its widely circulated images of lifeless children, appears to have galvanized Trump and some of his top advisers to harden their position against the Syrian leader.

The assault adds new complexity to Syria’s prolonged conflict, which includes fighters battling the Syrian government and others focused on combating the Islamic State, which despite over two years of American and allied attacks remains a potent force.

Within the administration, some officials urged immediate action against Assad, warning against what one described as “paralysis through analysis.” But others were concerned about second- and third-order effects, including the response of Russia, which also has installed sophisticated air-defense systems in Syria, according to the officials, who spoke on the condition of anonymity to discuss internal deliberations.

The Trump administration’s position on the strongman appears to have quickly shifted in the wake of the chemical attack, as senior officials voiced new criticism of the Syrian leader.

McMaster described a deliberative process inside the White House and National Security Council, where three options were examined at the request of the president. Trump made the final decision and the strike “clearly indicate the president is willing to take decisive action when called for.” He emphasized, however, that the move did not otherwise alter the U.S. military’s posture in Syria.

Earlier Thursday, Tillerson suggested that the United States and other nations would consider somehow removing Assad from power, but he did not say how. Just a few days ago, the White House had said that removing Assad was not realistic with press secretary Sean Spicer saying it was necessary to accept the “political reality” in Syria.

“We are considering an appropriate response for this chemical weapons attack,” Tillerson said in Palm Beach, Fla., where Trump was meeting Thursday with Chinese President Xi Jinping. “It is a serious matter. It requires a serious response,” he said.

Speaking later Thursday, Tillerson recalled a 2013 agreement with Syria to hand over its chemical stockpile and for Russia to monitor that Assad not renege on that deal: “Clearly, Russia has failed in its responsibility on that commitment. Either Russia has been complicit or has been incompetent on its ability to deliver,” he said.

The summit with the Chinese leader will continue Friday, and some U.S. officials believe the strike will also serve as a warning of U.S. willingness to strike North Korea, if China does not act to curtail the nuclear ambitions of the government there.

It was not immediately clear whether Thursday’s assault marked the beginning of a broader campaign against the Assad government. While Thursday’s operation was the first intentional attack on Syrian government targets, the United States accidentally struck a group of Syrian soldiers in eastern Syria last year in what officials concluded was the result of human error.

The Obama administration had insisted that Assad could never remain in any postwar Syria, and it supported rebel groups that have tried unsuccessfully to oust him.

The United States has a broad arsenal already in the region, including dozens of strike aircraft on the USS George H.W. Bush, an aircraft carrier that is deployed to the Middle East and accompanied by guided-missile destroyers and cruisers that can also launch Tomahawk cruise missiles.

Additionally, an amphibious naval force in the region includes the 24th Marine Expeditionary Unit with Harrier jets and Cobra gunships. The Pentagon also has scores of aircraft in the region flying operations every day against the Islamic State group, including from Incirlik air base to the north in Turkey.

The attack appears to have involved only missiles. U.S. fighter planes, if used, would have had to contend with a modest web of Syrian air defenses and potentially more advanced types of surface-to-air missiles provided by Russia.

One of Assad’s more prevalent systems, the S-200, was used to target Israeli jets last month, but missiles were intercepted by Israeli defense systems. The S-200 has a range of roughly 186 miles, according to U.S. military documents, and can hit targets flying at altitudes of around 130,000 feet.

Russian S-300 and S-400 missiles, located primarily around Khmeimim air base in western Syria, have a shorter range than the S-200, but have more-advanced radar systems and fly considerably faster than their older counterparts used by Syrian forces. The S-300 has a range of roughly 90 miles and could also be used to target incoming U.S. cruise missiles.

In a joint statement, Sens. John McCain (R.-Ariz.), chairman of the Senate Armed Services Committee, and Lindsey Graham (R-S.C.) said the operation “sent an important message the United States will no longer stand idly by as Assad, aided and abetted by Putin’s Russia, slaughters innocent Syrians with chemical weapons and barrel bombs.”