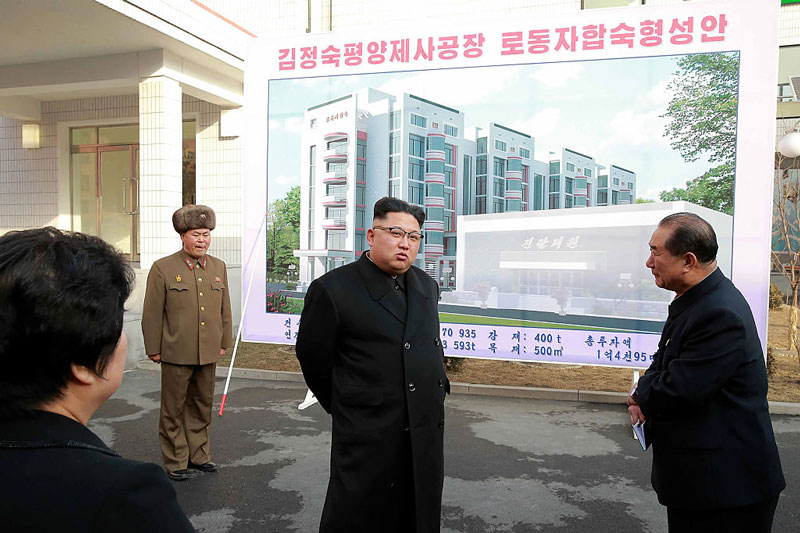 Less than two weeks before President-elect Donald Trump takes office, North Korea has claimed that it can test an intercontinental ballistic missile at any time, from any location.

“The ICBM will be launched anytime and anywhere determined by the supreme headquarters of the [Democratic People’s Republic of Korea],” an unnamed Foreign Ministry spokesman was quoted as saying by the official KCNA news agency, as Reuters reported.

The Foreign Ministry statement on Sunday marked the latest escalation in the developing relationship between Kim Jong Un and Mr. Trump as Inauguration Day draws closer. In his annual New Year’s address on Jan. 1, Kim Jong Un announced that the North had reached the “final stages” of ICBM development. Two days later, Trump responded with a tweet asserting that a North Korean nuclear weapon capable of reaching the United States “won’t happen!”

On Sunday, US Defense Secretary Ash Carter told “Meet the Press” that North Korea’s missile and nuclear weapons development is a “serious threat,” and that the US military would shoot down any missiles that appeared to be headed toward American territory or the territory of American allies. The interview came days after the US said on Thursday that North Korea had shown a “qualitative” improvement in its nuclear and missile capabilities following high levels of testing last year.

Officials and experts on North Korea say there is no one right path for the incoming Trump administration to take in dealing with North Korea, as David Iaconangelo reported for The Christian Science Monitor last week:

Since the presidency of Bill Clinton, the US has tried to exchange aid for disarmament. A 1994 deal that would have allowed North Korea to produce nuclear energy and normalized ties with the US failed after it was discovered that Pyongyang had sought to use uranium for weapons. The North also withdrew in 2009 from China’s attempt to broker nuclear negotiations with four other countries, and a 2012 Obama administration food-aid deal that would have frozen North Korea’s nuclear and missile programs was abandoned just weeks into the effort, after the North tried to launch a long-range rocket.

Mr. Trump said on the presidential campaign trail that he was willing to meet with North Korean leader Kim Jong-un. He hasn’t outlined any further steps, though a transition team adviser told Reuters that “a period of serious sanctions” would be “a major part of any discussion on the options available here.”

That’s been the main strategy since the North conducted the first of its five nuclear tests, in 2006, though the country’s economic and diplomatic isolation tends to limit the effectiveness of such sanctions. And Trump’s antagonistic view of China might further hinder long unsuccessful US attempts to get North Korea’s closest ally to cut back on trading with its neighbor, for whom it supplies a significant economic lifeline.

The Sunday report from KCNA suggests that North Korean leaders are hoping a President Trump will take a different approach toward US-North Korea relations than his predecessors.

“Anyone who wants to deal with the DPRK would be well advised to secure a new way of thinking after having a clear understanding of it,” the foreign ministry official reportedly said.

While some experts express concern that Trump has yet to detail a strategy for dealing with the North, other observers are more optimistic.

“I see the advent of Trump as an opportunity,” Chun Yung-woo, a former South Korean national security advisor who has participated in talks with North Korea, told The Los Angeles Times. “In dealing with unconventional leaders like Kim Jong Un, I think a leader like Trump, another unconventional leader, could help. I don’t think a conventional approach works better.”