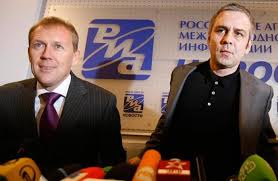 The Obama administration has sanctioned top allies of Russian President Vladimir Putin, including a senior federal investigator, and the alleged assassins of Alexander Litvinenko, a former Russian spy.

The men accused of poisoning Litvinenko in London in 2006, Andrei Lugovoi and Dmitri Kovtun, were among five Russians sanctioned under the Magnitsky Act, a United States law that allows punitive measures against Russians.

The punishment freezes all their US assets and bars them from travelling to the country.

The State Department did not detail what the new targets are accused of, but the move comes at a time of increased diplomatic tension with Moscow.

“Each of the most recently added names was considered after extensive research,” State Department spokesman John Kirby said.

Kirby said the individuals had “roles in the repressive machinery of Russia’s law enforcement systems, as well as individuals involved in notorious human rights violations”.

Federal prosecutor Alexander Bastrykin is one of Putin’s most powerful allies and is head of an investigative agency that had led alleged crackdowns on domestic dissidents.

Lugovoi and Kovtun were accused of poisoning Litvinenko, a former Russian agent turned freelance investigator who had collaborated with British intelligence.

Litvinenko is believed to have ingested polonium-210, which is produced in nuclear reactors, while drinking tea with Kovtun and Lugovoi.

President Barack Obama’s outgoing administration has already accused the Kremlin of cyber espionage to influence the US elections. It also expelled 35 Russian diplomats .

A senior official told the AFP news agency that Obama’s final update to the Magnitsky Act does not include Putin himself, because the US does not want a complete breakdown in ties.

“We need to preserve the possibility of working with Russia in areas in which it is in the US national interest,” the official told AFP, on condition of anonymity.

“Our goal in imposing sanctions is to change behavior,” he said. “We have taken steps to make clear that interference in US democratic processes will not go unanswered.”

The Magnitsky Act was originally passed to enable US officials to impose sanctions on Russians implicated in the 2009 prison death of Russian tax fraud whistleblower Sergei Magnitsky. The total list of targets now includes 44 names.