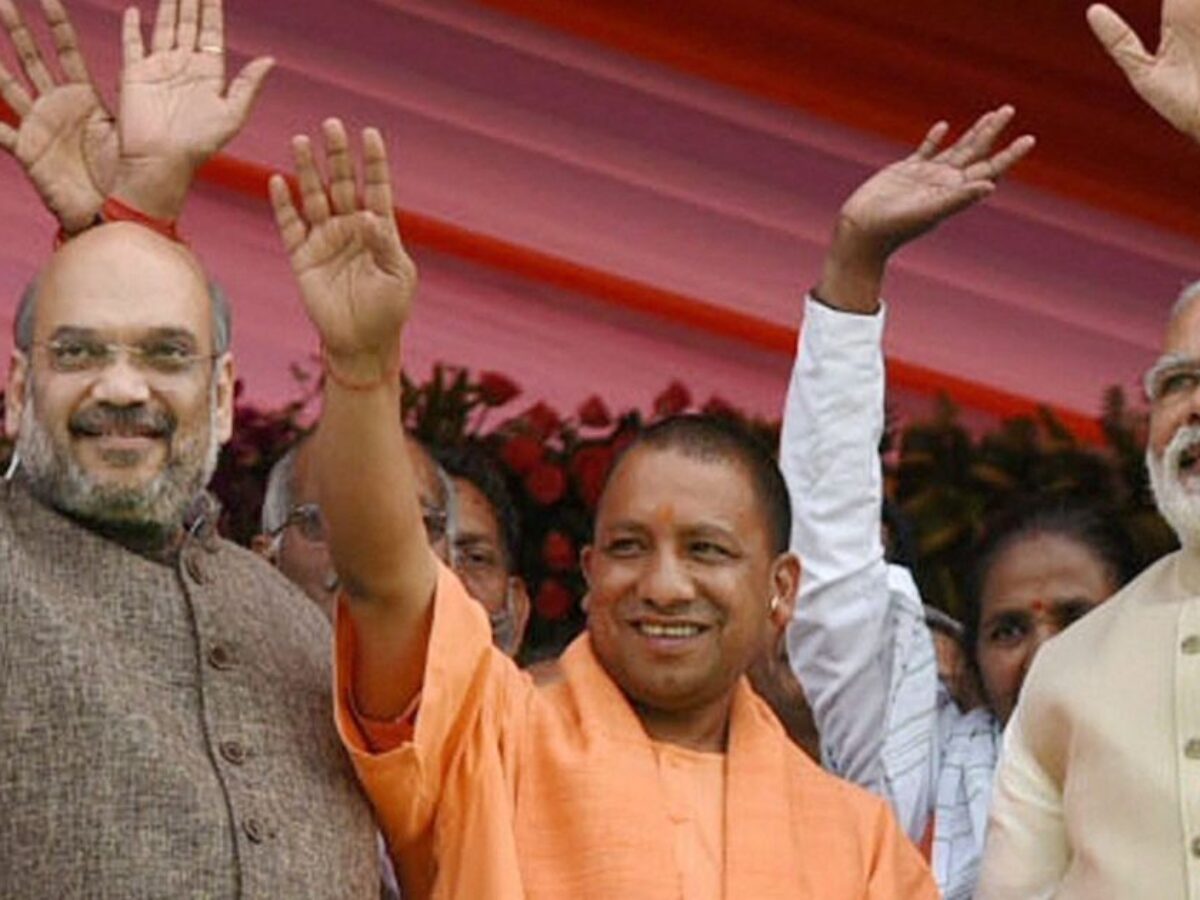 India in South Asia has been the center stage for using religion for political gains, by exploiting the caste, and religion of people through a huge propaganda which has been carried out by its proponents since the British colonial time.  Hindu Nationalism is not a new phenomenon in India’s political culture. The ideological foundations of Hindu nationalism were elaborated by Vinayak Damodar Savarkar in his book, “Essentials of Hindutva”. Though it began as a social and religious movement, but soon the Hindu nationalists transformed this movement into a political force. This was done in opposition to Congress party and Muslim League.

A 16th century mosque, Babri Masjid, built in Ayodhya by Mughal Emperor Babur was reduced to rubble by group of Hindu extremists, who wore saffron bandanas, within six hours. They believed that this mosque was built on the birthplace of Lord Rama, a deity. The destruction of Babri Masjid was the beginning of one of secular India’s biggest problem that it was going to face in coming years. Hindu majoritarianism lied under the debris of Babri Masjid, one approach to use religion for the political benefits. This also signified that Muslims were going to be alienated consciously from the country’s social and political sphere.

Since the past two decades, such ideas and agendas had been rising and falling under India’s multiparty democracy, but whenever these ideas started gaining prominence, they were checked by the strains imposed by secularism. The people of India voted for a radical regime change in May and two dominant factors appear for triggering this transition. Firstly, record of Congress’s inefficiency, corruption frustrated the Indian electorate and secondly the dysfunctional electoral alliances entrenched with hereditary rule was looking for some new experience. An extravagantly funded campaign began in India under popular Narendra Modi, and BJP seizing the moment promised to bring economic growth and “good days”.

The campaign led by BJP showcased Modi as a successful leader who had been able to deliver good governance and high growth as a Chief Minister of Gujarat from 2001-2014. A large section of middle-class Indians was appealed to this especially the ones that belonged to a new or aspiring middle class. The second group which favored Modi was the NRIs, the successful non-resident Indians. The campaign also got full support from elites of corporate and business sector. BJP was successful to gather support of the low caste, poor voters who had little know how of economic and social program or the agenda of Hindutva.

Indian nationalism is so much influenced by religion that one can clearly see the overlapping symbols between Hindu communalism and Indian nationalism. The colonial India under British, fundamentally Christian, not secular or neutral, recognized a close affiliation of nationalism with aggressive Hinduism. Indian nationalism coupled with the religious movements, rejected Congress’ appeal of non-violence and understood that Hindu civilization was under threat by British colonialism. Several Hindu leaders, during the Indian nationalist movement, made emotional speeches, literature, music, dramas and other forms of art were produced which has religious connotations.

The Hindu revivalist movements were a part of nationalist movements, which promoted the idea of threat from others i.e. religions other than Hinduism and British Raj. Though their influence was limited but when Hindu Mahsabha was formed in 1915, the idea of “majority religion and dominant caste” flourished and the idea spread to most parts of India. Hindu Mahasabha, at this time was a sub-group of Congress and not a party of its own. It worked as a lobby within Indian National Congress until 1930s when it became a full-fledge party, under the leadership of Savarkar. He was the one to turn Hindu nationalism so radical, that many saw it as communal and fundamentalist.  This was for the first time Hindu nationalism appeared in India’s political arena, which soon required to be systematized and to be formed into an organizational structure. Keshab Baliram Hedgewar, took up this task and founded Rashtriya Swayamsevak Sangh (RSS) in 1925, in Nagpur. The ideological position of RSS was known as “Hindutva”.

Before becoming prime minister, Modi’s election manifesto emphasized on the assurance to development, vikaas; instead of his hidden motives of Hindu Nationalism. However, this was changed when Modi came to power as prime minister of world’s largest democracy and he openly pursued two objects, one that of vikaas and the other one of accomplishment of the Hindu State – the Hindu Rashtra. Kanchan Chandran argued, “Modi has always been both a reformer and a Hindu nationalist, and this two-dimensional package is the essence of his appeal.”

The history of Modi’s rule, whether as a chief minister of Gujrat or as a Prime Minister of India, shows that minorities are under constant fear of losing their homes or becoming a victim of marginalization or oppression carried out by Hindu fanatics.

Before going into depths it’s important to mention that can a religious party like BJP, that is committed to promoting Hindutva, govern a secular and democratic country like India and does it wish to give all citizens of India, without marginalizing them, equal share of rights? This question becomes significant when BJP’s mother organization RSS’s founding father Savarkar and Golwalkar did not favour Indian secularism or even giving equal citizenship rights to religious minorities, who were considered alien. They envisioned a Hindu nation which would be homogenized, which they defined in terms of holy land, religion, race and language. BJP and RSS, both have been in opposition to India’s secularism and profound ambiguity about democracy is visible in the ideologues of Hindutva.

Their ideal has been to preserve the organic solidarity among the social groups in a manner that ideal caste system would have done in Hindu golden age, avoiding social conflicts, Major attraction of democracy among these ideologues was the idea of one person one vote, which would guarantee Hindu majority. Hindu nationalists have deployed the idea of equality under the law as a useful instrument to oppose special provisions for minority rights.

As BJP came to power, other Hindu nationalist groups (the saffron brigade) took initiatives to launch their agenda of Hindutva.  These militants and nationalists were supported by Sangh Parivar’s leading activists and ministers from Modi’s cabinet. They were openly engaged in delivering hate filled speeches against the country’s religious minorities. This went to the extent that a recommendation of forced sterilization was passed to control population growth and campaigns such as “Ghar wapsi” which means returning home were organized and aim was reconversion.

India’s notion of secularism is seen under threat. A question that most probably comes to mind is that though India claims to be secular and democratic nation which entertains diverse religions, cultures, languages and religions. But do people, other than Hindus really feel safe in India, and does the lower caste of Hindus feel the same? What kind of secular state it is, where people are killed for eating beef or seen as a threat if they practice a religion other than Hinduism. A secular state according to a common man’s understanding is the one where religion is a private matter, while politics is a public matter, and both operate in separate spheres. Whether BJP has been in power or Congress, such events where religious minorities especially Muslims are targeted can be seen throughout the history of India.

Identity in idea is shaped on the boundary of us i.e. Hindus, vs them i.e. religious minorities. This idea of others being the enemy has been central to Indian politics now, which is the core agenda of BJP’s Hindutva ideology. Caste and religion play a decisive role in the Indian politics and political success of parties depends on these two factors. Since independence 1947, caste dominated the political arena, but after 2014 elections the trends seem to change as religion is now playing a major role in influencing the politics. BJP will keep winning elections, if Hindus keep voting for it. BJP pushes the propaganda of making Hindu India, which is accepted by a larger number of people. BJP mobilizes people against religious minorities through flaming communal and religious riots, such as slaughter of Muslims for eating beef.

One important question about the rise of Hindu nationalism in India is why the idea laid down by the founders of country, Gandhi and Nehru of secular and civic nationalism collapsed and transformed to ethnic nationalism of Hindutva ideology? Two reasons are at the surface for this radicalization of the society. One, in the late 1980s, the Indian National Congress gradually faced its decline, two the erosion of democratic structures. Both of these reasons explain the rise and ascendance of power of BJP.

Evidence and studies show that, both religion and caste play a very significant role in mobilizing the people and India’s nationalism can be expressed through Hindu symbolism. The success and growing popularity of Modi amongst the Indians highlights that Hindu nationalism has not died, and it’s becoming stronger than before under BJP.BY HIRA SHAKEEL