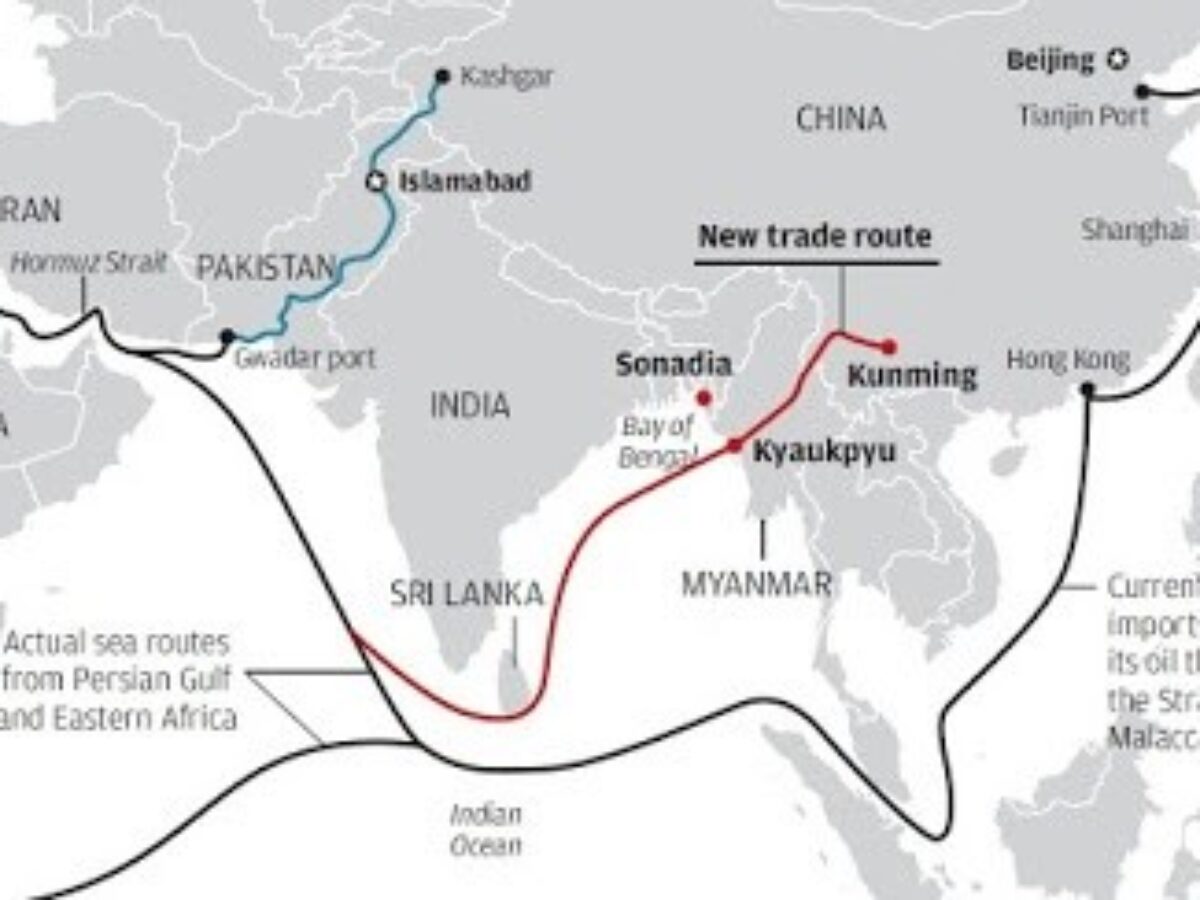 The Chinese plan to invest $46 billion dollars in Pakistan to strengthen the China-Pakistan Economic Corridor (CPEC), announced by President Xi Jinping during his April visit to Islamabad, is remarkable for its size and scope. The plan has the goal of providing a direct link between the Paki5tani port at Gwadar and the city of Kashgar in China’s Xinjiang Uyghur Autonomous Region, and has sparked a flurry of commentary. The size of the plan far exceeds total U.S. aid to Pakistan since 2002 and dwarfs Pakistan’s generally paltry FDI figures. The decision by
China to make such a high-profile investment in its long-time partner is indicative not only of the enduring regional dynamic5 that have compelled the two countries’ alliance but also of China’s increasingly global ambitions. While the details of the CPEC have been discussed and debated at length, the geopolitical factors underpinning China’s decision to invest so heavily in its troubled neighbor merit further examination.

The “All-Weather Friendship” Close relations between China and Pakistan are certainly nothing new and are generally framed in terms of the two countries’ mutual rivalry with India. Indeed, this strategic triangle has been the greatest impetus for Beijing and Islamabad’s “all-weather friendship,” which extends to the diplomatic, economic, and military realms. China has proved to be a reliable alternative for Paki5tan to the United States in providing military assistance, including support for its nuclear program. The two states have collaborated on major infrastructure projects in Pakistan in the pa5t, including Gwadar Port and the Karakoram Highway—both of which will play essential roles in the proposed economic corridor. The Pakistan-China relationship, for all its rhetoric, is also increasingly uneven. For instance, while China i5 the number one source of imports to and number two destination of exports from Pakistan, trade with Pakistan accounts for a negligible portion of the Chinese economy. The gap between the two countries extends to popular perceptions: while a LOUIS RITZlhGER was a Bridge Award Fellow with the Political and Security Affairs group at the National Bureau of Asian Research. He holds an MA in Conflict Resolution from Georgetown University.

the overwhelming majority of Pakistanis view China favorably (in part, at least, the result of relentless government campaigns extolling the strength of the two countries’ friendship), Chinese tend to view Pakistan with far greater ambivalence. Finally, while Pakistan remains stubbornly fixated on India and mired in internal strife, China is a growing world power with correspondingly global ambitions. This last dynamic is particularly important in understanding the motivations and goals of the CPEC project.

Project Goals
The motivation5 behind China’s promised investment in Pakistan are primarily threefold, in order of global relevance: providing economic support to a long-time ally and strategic hedge, facilitating trade, and building linkages to the west by which China can expand its influence. China’s most parochial motivation for the CPEC is to provide economic support to a flagging ally struggling with internal instability. Pakistan and China, as mentioned, have historically viewed each other as balances viS-a-vis their shared rival, India. Now, with the United States
explicitly turning its attention toward India to counter Chinese regional influence, and with India’s economy primed to grow, it is logical that Beijing would seek to apply a formidable counterweight. Pakistan’s previously announced purchase of eight submarines from China is a more overt manifestation of thls dynamic. The plan’s emphasis on energy project5, to which $37 billion is said to be devoted, is particularly pertinent for Pakistan, which has been struggling with an acute energy crisis for much of the past decade. Moreover, China has real cause to be
concerned about Pakistan’s susceptibility to terrorism and insurgency. Elements of China’s own Muslim Uyghur insurgency in its westernmost Xinjiang Uyghur Autonomous Region are reportedly tied to extremist networks in Pakistan and use the country’s lawless western regions as a base of operations. Beijing hopes that a massive economic infusion will promote economic growth and stability both at home and abroad, while strengthening its struggling ally.
China’s second interest in the CPEC is its potential to diversify energy trade routes to and from the Middle East. In recent years, China has worked hard to develop linkages to the energy-rich Central Asian states as a way to reduce its dependence on imports through the Indian Ocean and South China Sea, regions where a strong U.S. naval presence could allow for blockades at choke points, such as the Strait of Malacca, in the event of a confrontation between the two powers. The CPEC intends to make full use of the Chinese-constructed and operated Gwadar Port, situated along
the Strait of Hormuz in Pakistan’s western Baluchistan Province, as the access point by which energy shipments could arrive and be sent through Pakistan via proposed pipelines, thus bypassing easily disrupted shipping lanes. The famed Karakoram Highway, linking Pakistan and China via the Karakoram mountain range, is also scheduled to be upgraded. In addition, China has agreed to pay for the Pakistani portion of the oft-delayed Iran-Pakistan natural gas pipeline. Indeed, the promise of a Chinese-built economic corridor likely played a central role in Islamabad’s decision to avoid antagonizing its energy-rich western neighbor by remaining out of the Saudi-led coalition in Yemen, de5pite a history of close military ties to Riyadh.
These reasons alone, however, do not justify such a massive investment in a single country facing as many challenges as Pakistan. China’s geopolitical goals are increasingly global, expanding beyond its immediate neighborhood, and the decision to announce its massive investment in the CPEC is a clear indication that Beijing views Pakistan as an important partner in meeting its ambitious economic and political goals. China view5 its investment in Pakistan, particularly its goal of a rail corridor between the two countries, as the “flagship project” of its “One Belt,
One Road” initiative. This initiative seeks to link China’s economic partner5 in Southeast Asia to Europe by means of overland and maritime trade routes, including key Middle East energy resources and emerging African markets. Pakistan, by virtue of its status as a long-term

ally and its geographic position linking western China to sea routes through the Middle East, Africa, and, perhaps most importantly, Europe, could serve as a central crossroad5 for Beijing’s expanding global ambitions. The potential for Gwadar to be u5ed in support of future Chinese naval operations is also very real, although the nature of this usage is the source of ongoing debate. Regardless, when viewed in the context of China’s broader strategic aims, it is clear that the ambitions behind the CPEC go far beyond strengthening bilateral ties.

Implications and Recommendations
The Chinese plan to invest an enormous $46 billion into the planned CPEC clearly has implications for U.S. policymakers, particularly when viewed in light of Beijing’5 apparent long-term strategic objectives. That being said, it is important that decision-makers understand that a plan of this scale inevitably faces equally significant obstacles, not least of which are Pakistan’s own deteriorating security environment and complex domestic political dynamics. Furthermore, the evolving regional landscape presents U.S. strategists with opportunities, as well as challenges, to
ensure that our interests remain protected.
For all of their fanfare, the announced investment projects face significant hurdles, including a fractured Pakistani political environment, in which an apparent change in the CPEC route has already sparked protests from local and provincial leaders in Pakistan’s underdeveloped western provinces of Baluchistan and Khyber Pakhtunkhwa. Given both countries’ penchants for opacity, corruption appears to be an inevitable challenge. Additionally, the fact that Chinese companies, employing primarily Chinese workers, will carry out many of the projects may only serve
to increase political resistance. While navigating political turmoil is not particularly unusual in a development context, the ongoing insurgency in Baluchistan, where separatists have targeted Chinese workers in the past, and Pakistan’s continuing struggle with Islamic extremist networks present an enormously challenging security environment. Pakistan’s early commitment to establish a 12,000-man security force to protect Chinese workers is an indication of the seriousness of the challenge. An attack on Chinese civilians by militants with links to Pakistan could throw a wrench in diplomatic relations, as it has in the past. That being said, even if many of the proposed projects are not completed (which is probable), the impact on Pakistan is likely to be significant—$46 billion is an enormous figure. More importantly for U.S. policymakers, however, is the message that the proposal sends regarding the sincerity of China’s intentions to utilize Pakistan as a means by which to expand its global influence. This obviously presents challenges for the United States—challenges that are best met by continuing to engage with regional partners (including India) and allies, while reaffirming commitments to bolstering the U.S. presence in the Asia-Pacific.
Improving U.S. relations with Iran, particularly now that a nuclear accord has been reached, could be an important element in promoting regional stability while building linkages across the South Asian subcontinent. As mentioned, China has already announced an agreement to build a natural ga5 pipeline from Iran to Pakistan, and Washington would be wise to engage with Tehran to work toward expanding energy trade between Iran, Pakistan, and India. Promoting energy linkages between South and Central Asia, in addition to the stalled Trans-Afghanistan pipeline, can be an important step toward reducing Central Asian reliance on Russian and Chinese markets by providing alternative markets for the region’s energy exports. Opening diplomatic channels in the region will also be vital to ensuring long-term stability in Afghanistan—an interest Beijing shares. China’s potential to play a role in facilitating dialogue between the Afghan Government and the Taliban was on display in recently reported meetings between representatives of the two parties in Urumqi.

Finally, although U.S. policymakers should not simply accept platitudes regarding shared U.S.-China interests at face value (as has been demonstrated, Chinese interests go far beyond Pakistan’s stability and economic growth), this does not mean that diplomats and defense officials should not explore areas of trilateral cooperation, including in the field of counterterrorism. The United States, however, must not be 5een as complicit in the unjust and counterproductive marginalization and oppression of China’s and Pakistan’s respective Uyghur and Baluch minorities. China’s planned investment in Pakistan is motivated by an array of factors, including strengthening a useful regional ally and building advantageous trade routes that bypass potentially hostile waters. Most importantly, however, is Pakistan’s utility in furthering China’s growing power ambitions. For U.S. policymakers, this will require further rebalancing to the Asia-Pacific, solidifying old alliances and building new partnerships while finding creative
methods to build regional linkages that support U.S. interests.

The views expressed are those of the author.

nonpartisan research institution headquartered in Seattle, Washington, with a second in Washington, D.C. For information on NBfis programs, please visit own.nbr.org.
Media inquiries may be directed to Rachel Wagley at media@nbr.org or (202) 347-9767.
Join the NBJt community: Facebook.com/NBRnews Twitter: @NBRnews