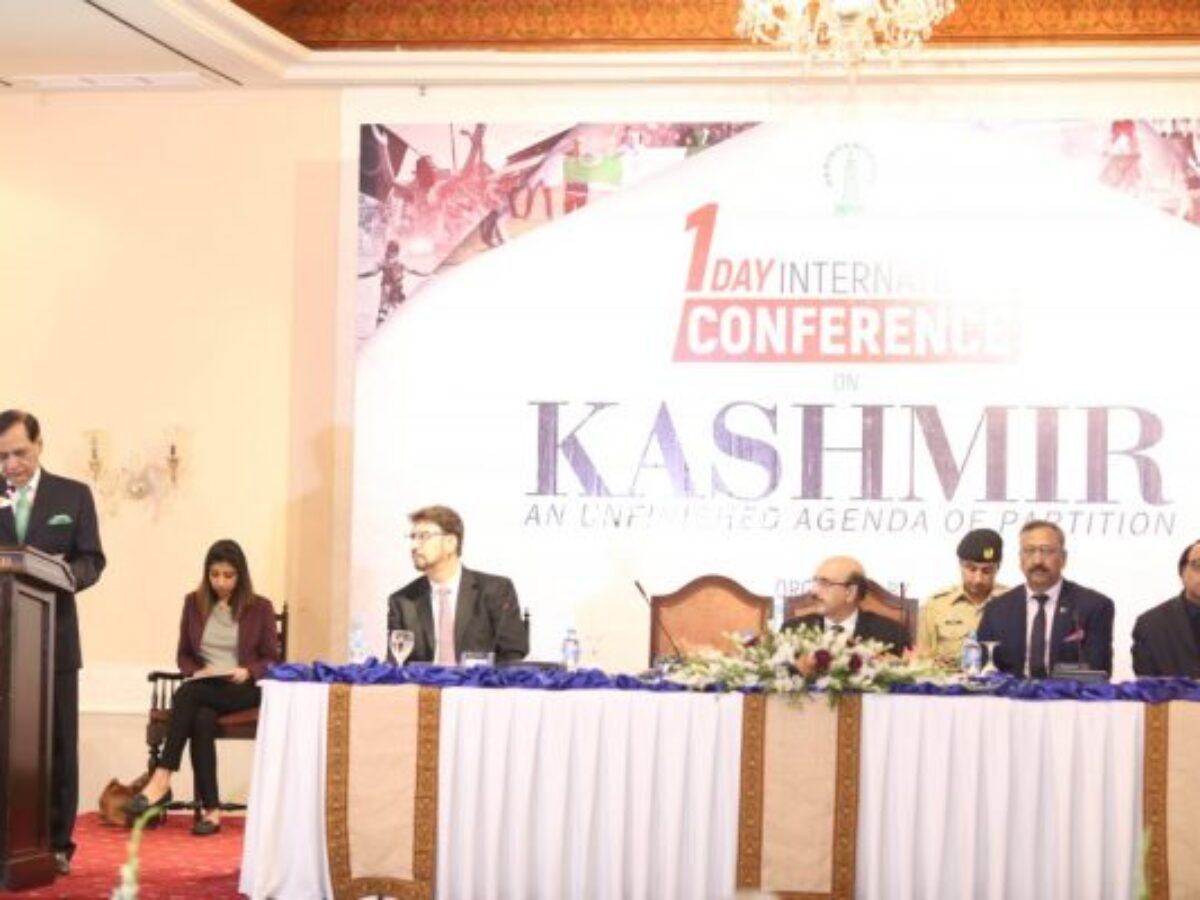 One-day international conference on “Kashmir: An Unfinished Agenda of Partition” was organized by Pakistan House on Monday 7 May 2018 at a local hotel in Islamabad. The conference mainly focused to assess the failure of International organizations and community to protect Kashmiris from continuous brutalities at the hands of more than 7, 00 000.00 heavily armed security forces in Indian Occupied Kashmir (IOK). The purpose of the conference is to explore “new channels of communications” between Pakistan, India and Kashmiri people so that a dialogue on peaceful resolution on Kashmir can be initiated.

Gen Ehsan ul Haq (Retd.) NI (M) stated that the focus on the Kashmir dispute has acquired a sense of urgency in recent times on two counts: massive violations of Kashmiri people are being perpetrated and the unfolding of geopolitical and geostrategic paradigm on both regional and global security calculus. He reiterated that we should ask the question that would this create a rethink in Delhi and could stand as an opportunity for peace? Kashmir dispute cannot be wished away and it will keep on recurring. Status quo is not a solution. The added that he Kashmiri struggle has shifted to the new generation. After many years Pakistan has regained centrality and Indian attempts have not been successful to pacify the issue. He stressed that it is a daunting humanitarian challenge. It warrants urgent attention to resolve through multi track dialogue and solution centric deliberations for resumption of indo-Pakistan dialogue and there are three parties to the conflict India Pakistan and People of Kashmir and it is essential to address varying levels of dispute. War is no more an option, we should restructure a detente and a structured mechanism for resolving is needed to be evolved. The immediate priority should be to provide relief to Kashmiri Population. Kashmir issue cannot be wished away and cannot be put on the back burner it yearns for a just and equitable solution. Kashmir solution is a win win for all that would lead towards inducing stability in the region.

Mohammed Afzal Khan, MP, Shadow Minister for Immigration, British Parliament, stated that Occupied Kashmir is also an area where human rights abuses have taken place, which are well documented by international organizations such as Amnesty International. The over bearing military presence has exerted its strength by violating the rights of women and children in particular, where the most vulnerable have no protection as the male members of the family lie in mass graves and /or are have disappeared. The truth is, the stubbornness of the Indian government is resulting in the South Asia continent paying the price with growing instability. The development of CPEC is a good opportunity for the region to work together for the benefit of all, yet again India appears to be quite happy to play a negative role for the geo political benefit of outside players. The UN is not speaking out to say who is violating the LOC, so that the world knows who is the aggressor? It would not be an unfair statement to say that UN does not have any legs nor any teeth!

While addressing the Conference via video from London, Mr. Chris Leslie, MP & Chair All-Party Parliamentary Groups (APPGs) on Kashmir said that one of the biggest challenge is that International media failed to highlight the plight of Kashmiri people that it deserves. Mr Leslie shown great concern over the ongoing human rights violation in IOK and is of the view that the situation in IOK in not only bad for Kashmiris but also for the wider region as both India and Pakistan are nuclear powers. This year the priority of All Parties Parliamentary Group on Kashmir (APPG) to carry out our own inquiry on Human Rights violation in IOK. He empathized on initiating Confidence Building Measures (CBMs) between Pakistan and India, in order to find pathways to peace including demilitarization of Kashmir. He also stressed the need for fulfilling the historic responsibilities of Britain to help resolving the Kashmir issue.

Addressing the Conference via video, Julie Ward, MEP, Vice President Kashmir Group in the European Parliament, said that she is very much concerned about women rights in Kashmir as well as Human Rights violation in Indian Occupied Kashmir (IOK). She stated that violation of women rights are rising in IOK and they are being sexually assaulted by police and security forces. As a result in several cases, miscarriages of pregnant women occurs during assault.  She further said that widely reported incidents of braid chopping is appalling, a practice that denies women’s dignity.  She condemns the abuse against women and stressed for a peaceful resolution of Kashmir.

Addressing the Conference via video, Tony Lloyd, Shadow Secretary of State for Northern Ireland, stated that thousands of lives lost due to unresolved issue of Kashmir since partition. He said that atleast 10,000 people have disappeared, and people are victim of rape and torture. The use of pallet guns is ruining the lives of many people. The major countries need to pay attention to resolve the Kashmir issue because it is the oldest conflict. Comparing current situation in Northern Ireland, he said that peace can bring economic prosperity and job to people and there is a need to resolve the Kashmir issue peacefully so that people of the region can enjoy the benefit of peace.

Addressing the Conference via video, Ms. Anthea Mclnytre, MEP, Chairperson Friends of Kashmir in the European Parliament, validated Kashmiri’s right for self-determination and emphasized the need to continuously raise the issue of Kashmir in the European Parliament so that we don’t have another seventy years of terrible state that we are facing in IOK Kashmir. “My heart bleeds when I see the terrible stories of children being blinded by pallet guns and the heart wrenching incident of little girl who was repeatedly raped and then murdered”.  We cannot allow these things to go on without adding our voice. In the name of humanity, I hope that this conference will be able to find ways to promote peace in the region and towards a proper stabilization and means to have self-determination for all the people of Kashmir. Let’s hope that in coming time we will see peace in the region and we will see democracy prevail

Sardar Tanmanjeet Singh Dhesi, while addressing the Conference via video from London, said that the people in UK should support the dialogue and negotiation between India and Pakistan in order to resolve the Kashmir conflict. The Kashmir which was known to be such a beautiful, peaceful and paradise on earth that we try to ensure that human rights are safeguarded and that we work towards the prosperity.

The Azad Jammu and Kashmir (AJK) President strongly condemned massive human rights violations being committed by brutal Indian forces, besides killings of innocent people, demolition of houses in the name of ‘cordon of and search operations,’ women molestations and illegal detention of Kashmiri leadership. He said Pakistan and AJK government always effectively highlighted the issue on all international forums, extended all political, moral and diplomatic support to IOK people in resolving the issue as per their wishes. He said indigenous movement of Kashmiri people for their right to self-determination would continue till getting rid of Indian subjugation, adding that lasting peace in South Asian region could not be achieved without resolving the issue.

Rana Athar Javed, DG Pakistan House while concluding the session remarked that the international community must take the responsibility to address the massive human rights violations in IOK. The dehumanization of Kashmiri people severely challenges the international standard of human rights. Thus, there is a need for the UN, Britain and other countries to convince India to initiate a peaceful dialogue to resolve the core issue of Jammu & Kashmir, he said.