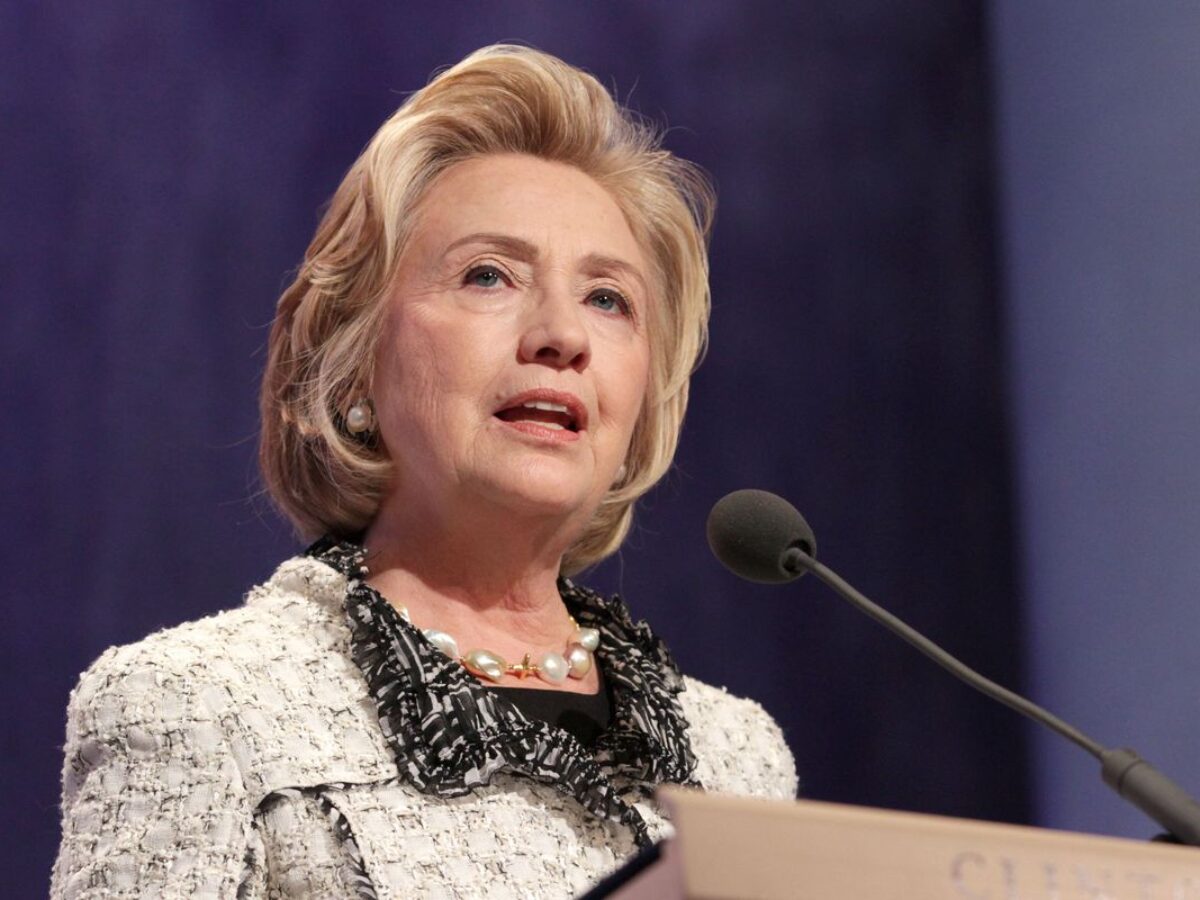 IT’S officially one year until the presidential election. Amazing how time flies, isn’t it? Once again we’re watching debates featuring what appears to be the entire supporting cast of “Ben-Hur.” Once again we’re asking ourselves why Iowa always gets to be first. Once again we’re wondering whether Hillary Clinton will make history by becoming the first woman president.

“It’s hard to believe there’s another year,” Clinton said in a phone interview, taking the glass-half-empty perspective. She was on her way to the airport during a fund-raising swing through California, broken up by an appearance on Jimmy Kimmel’s late-night show. Her formula for making it through another 12 months, she said cheerfully, was pretty simple: “We’re just getting up every morning. Step by step.”

“It’ll be a long slog,” she added with what I believe the entire nation understands is total accuracy. “But it’s more fun this time because I feel like we’re doing better.”

We’ve all been here before — a Hillary campaign and the first-woman-president possibilities it entails. In a way it’s so familiar that it’s hard to remember that the whole idea of a major female presidential candidate is new.

Clinton is the only woman who’s ever won a presidential primary. The only others who ever featured as even remote factors were the Republican Margaret Chase Smith in 1964, and the Democrat Shirley Chisholm, who got 152 delegates in 1972. (There were lots of ways to get little chunks of delegates without winning a primary back then.)

When we look back at our women-running-for-president history, we always have to start with Victoria Woodhull, who was the candidate of the Equal Rights Party in 1872. Woodhull still holds what may be the record for unsuccessful outcomes — she spent Election Day in jail after federal marshals arrested her on charges of publishing an obscene newspaper. This all had to do with Woodhull’s attempt to demonstrate the nation’s sexual double standard by publicizing an adulterous affair the famous preacher Henry Ward Beecher was allegedly having with a parishioner. She eventually left the country, worn down by all her battles. Meanwhile, Beecher’s parish raised his salary to $100,000 a year, and he got an endorsement deal with Pears soap. (“If Cleanliness is next to Godliness, Soap must be considered as a Means of Grace.”)

Woodhull was followed by a longish list of other women who ran for president as third-party or protest candidates. Many of them were lovely people, but we’re not going down a path that would force us to discuss the fact that the comedian Gracie Allen ran in 1940 on the Surprise Party ticket. Or that Georgiana Doerschuck ran for the Republican nomination in New Hampshire in 1996 on an anti-technology platform, promising that if elected, she would immediately issue an executive order banning all computers. Her campaign was particularly notable given the fact that Doerschuck was a desktop publisher. But really, we’re not going there.

We do have to talk about Margaret Chase Smith, the first woman to have her name placed in nomination at the convention of a major party. “The first woman in politics I was aware of was Margaret Chase Smith,” Clinton recalled. “I can remember opening up Life magazine and reading about this woman who was in the United States Senate. I had no idea there was such a woman.”

Well, there certainly weren’t a whole lot. Smith, who spent much of the 1950s and 1960s as the only woman in the Senate, was the first senator with enough guts to stand up to Joseph McCarthy and his witch hunt. Her courage made such an impression that some Republicans talked about Smith as a possible vice-presidential nominee in 1952. But the party leaders thought a much sounder choice would be Richard Nixon.

Finally, in 1964, Smith tried running for president herself, and she did make it through three primaries. She campaigned only on weekends, a home-state newspaper reported, so “she would not break her record of never missing a Senate roll call since 1955.” Imagine living in a world so quaint that a presidential candidate cares about a perfect attendance record. And speaking of heartbreakingly old-fashioned, the paper also noted that Smith’s “whole campaign cost $355.”

Smith made history, but she didn’t make any real dent in the election. Most people didn’t seem to take her very seriously, and it didn’t help that her signature campaign tactic was passing out muffin recipes. The Republicans, in the end, nominated Barry Goldwater.

The Democrats’ first big moment came in 1972 when Shirley Chisholm ran for the presidential nomination. Chisholm, an African-American, would have been a double historic first. But her party was in no way ready to make symbolic gestures. They needed a winner! So they nominated George McGovern.

HAVE you noticed a pattern here?

While Carly Fiorina hasn’t been doing very well on the Republican side, she is their first serious female presidential candidate since — umm — Michele Bachmann? Let’s do the party a favor and say Elizabeth Dole, who ran briefly in 2000. Dole had been a cabinet official twice and ran the American Red Cross. While she was pretty clearly not going to beat George W. Bush for the nomination, many people did think she’d be picked for the vice-presidential slot. Instead, Bush chose Dick Cheney. Imagine how different our history might have been if things had gone the other way.

Yes, one of the running subtexts in this story is really, they couldn’t have done worse. Another is that when it comes to women winning political office, there’s a long line of wives in the cast of characters. Dole is married to the former presidential candidate Bob Dole. Margaret Chase Smith was both wife and office manager for Congressman Clyde Smith of Maine, and she took his seat after he died.

The first woman governor, Nellie Tayloe Ross, won a special election in Wyoming to succeed her husband in 1925. The first female senator was Hattie Wyatt Caraway of Arkansas, who was initially appointed to succeed her husband. (This doesn’t count 87-year-old Rebecca Latimer Felton of Georgia, who was appointed to fill a one-day vacancy in 1922, as a tribute to newly enfranchised womanhood.) Debbie Walsh of the Center for American Women and Politics says 25 of the first 60 women to win congressional elections were widows who filled their husbands’ seats.

Clinton’s historical heroine is Eleanor Roosevelt, the ultimate example of a wife who achieves enormous political power without ever becoming a candidate herself. When the question of whether Hillary would have risen to presidential status if she hadn’t been married to Bill comes up, her fans tend to argue that if she hadn’t gotten married at all, she’d probably have gotten to the same place quicker on her own.

“I’ve heard that,” Clinton said. “Who knows? Life is so unpredictable.” (On the Jimmy Kimmel show, Clinton confided that if her husband had not been barred from seeking a third term, he’d have gone for it. And if she ran against him, “would I win? Yeah.”)

Thinking about the spouse question a little bit more, Clinton told a joke about a successful businessman and his wife who drive into a gas station where her old boyfriend is working. The husband notes with satisfaction that if she’d married him, she’d be the wife of a gas station attendant.

“And then,” Clinton concluded, “the wife says: ‘No, if I’d married him he’d be a big success like you.’”

Another rule for women running for high office is that they have to give the appearance of being very, very qualified. That would seem to be a given, but it doesn’t necessarily work the same for both genders. The pollster Celinda Lake says that voters expect female candidates to prove they’re up to the job, while they’re more likely to assume the men are qualified just because they’re on the ballot.

Maybe that’s one of the reasons — besides family responsibilities — that women tend to wait longer before they run for office. Even now, Debbie Walsh of CAWP says, women who get elected to state legislatures tend to be “older than their male counterparts and less likely to have children under 18 at home.”

You will remember the famous moment in 2008 when Clinton was asked what she would say to the voters of New Hampshire “who see your résumé and like it but are hesitating on the likability issue.”

“Well, that hurts my feelings,” Clinton responded, adding, “I don’t think I’m that bad.” Feel free to bring this up the next time someone says that debate moderators treat all Democratic candidates with kid gloves.

And then, of course, Barack Obama interjected, “You’re likable enough, Hillary.” It was supposed to be a joke, but it sounded supercilious, and may have helped seal the deal for Clinton in the New Hampshire primary — the first major party presidential primary in history to be won by a woman.

“I don’t sense the level of either novelty or resistance that I encountered in ’07-08,” Clinton said. Although there was a recent event where she took questions from children, and one girl asked what Hillary would do to end gender stereotyping.

But so far this time around, no men have gotten up in the middle of a speech to yell “Iron my shirt!” like someone did in New Hampshire eight years ago.

“Not yet,” she added. “Who knows what will happen. I still have a year.”

Clinton — the wife of a former president, with the longest résumé in the room — is a perfect transitional figure, whether she wins or not. Maybe there had to be a heroic Senator Smith with a muffin recipe, too. Maybe — and this is taking a really huge jump — there also had to be a “Ma” Ferguson, who became the first woman to be elected governor of Texas in 1925 after her husband was convicted of financial corruption. Ferguson did promise voters “two for the price of one” long before Bill Clinton thought of the phrase.

Good grief, maybe people will look back in 50 years and say we needed a Sarah Palin before there could be President X, who brought peace to the Middle East and reversed climate change after first winning public attention with her astonishing moose-hunting skills.

Try to think positive. The bottom line is that as we move forward, we never quite know what pushes history along