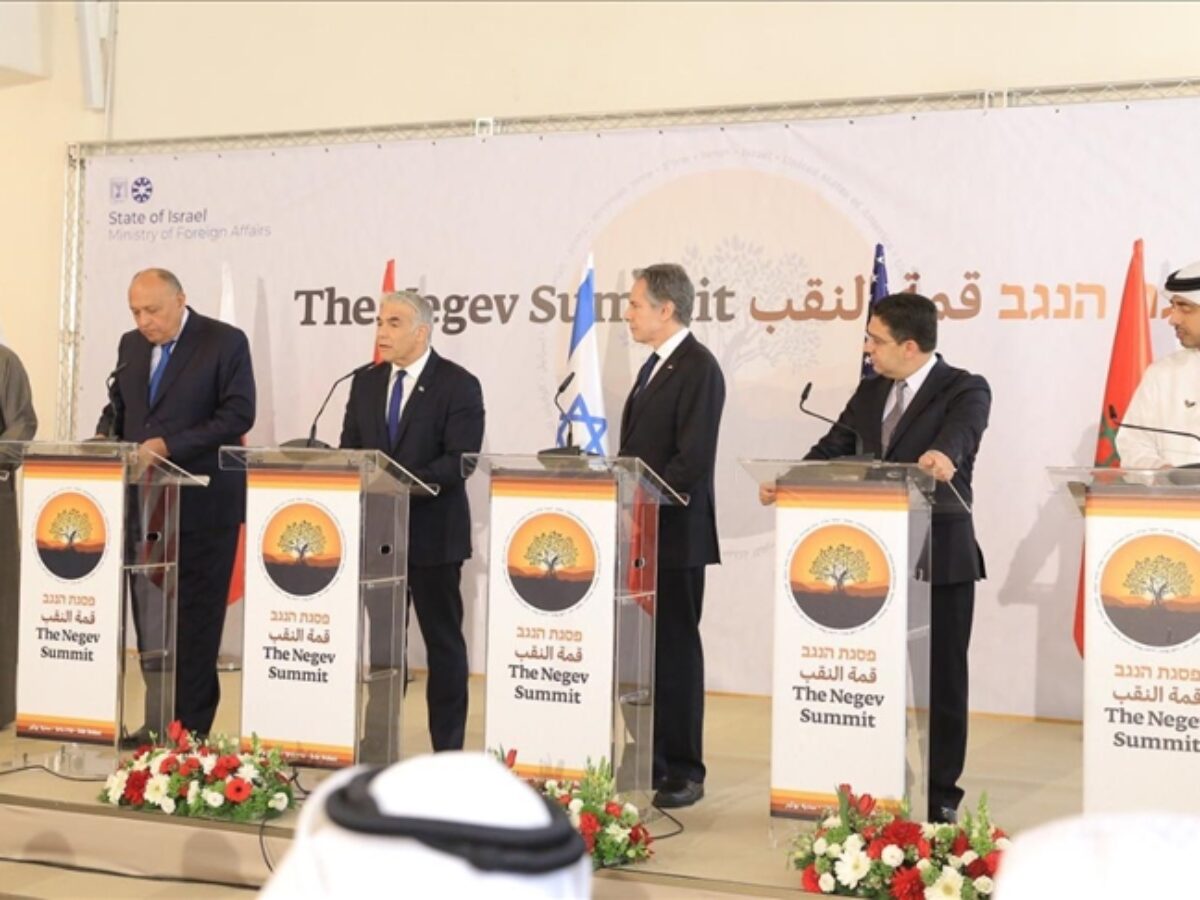 After being isolated by most of the Arab world for years, Israel is now cooperating with Arab nations who have some common goals that go beyond Iran i.e. to boost Israel’s role in regional matters. Last month, on March 27th, Foreign Ministers from the United Arab Emirates, Morocco, Bahrain and Egypt arrived in Israel for a two-day Negev-Summit. The Trump administration brokered the 2020 Abraham Accords, which began the normalization of Arab-Israeli relations. Since then, this process has subsequently been operationalized at a rapid pace. Despite little almost no progress on a solution to the Israeli-Palestinian conflict, Arabs have improvised relations with Israel through US mediated negotiations. At the event, the Arab delegates met with Israeli Foreign Minister Yair Lapid and also with US Secretary of State Antony Blinken. The Negev-Summit is the first in Israel’s history to host officials from four Arab countries. This summit has signaled a major shift in Middle Eastern politics where Israel seeks to build up its position. Negev-Summit had decided to turn into an annual forum and that the six countries will focus on to work together for economic cooperation as well as in different sectors such as security, energy, education, health, food and water security.

With the development in the form of the Negev-Summit, Israel not only elevated relations with Arabs but it has also emerged as an integrated player in Middle East. Israel’s diplomatic place in the region has strengthened after 55 years of the Khartoum Arab League Summit held in 1996, where “three no’s” (no recognition of Israel, no negotiations with Israel and no peace with Israel) resolution was adopted by eight Arab heads of state. Israel has been accepted by Arab states including signatories of the Abraham accords and participants of Negev Summit, but still there are Arab countries who have not yet formalized their ties with Israel. 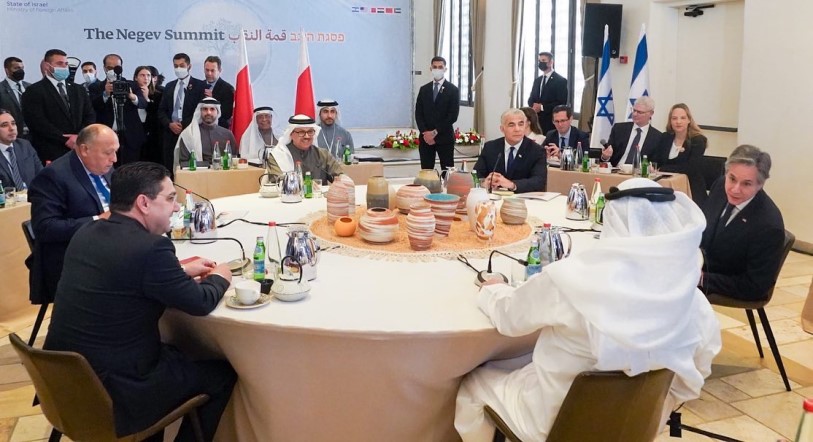 This summit looks forward to enhance regional-economic cooperation, expanded tourism and business exchanges among the Arabs and Israel for long-term partnership. Israel has long been a global player, dominant in the worlds of technology, cyber surveillance and military equipment; therefore, Arab states also want to boost their ties with Israel for economic and security interests. It is evident by Israel’s bilateral agreements with their counterparts in Bahrain and Morocco, to make it easier for the three countries to exchange military equipment and military coordination which was announced by Israeli Defense Ministry. Apart from that, UAE also signed a peace agreement in 2020 which was viewed as a huge surprise; it was meant to foster cordial and productive relations. According to reports, trade between Israel and the U.A.E. increased in 2021 to about $1 billion, roughly 20 times as much as in 2020. This suggests that the relationship between Israel and its Middle East partners is about to enter a new phase. For Israel, relations go beyond economic partnership because Iran is its biggest challenge in the region, as Israel wants to stop Iran from developing nuclear weapons. The Negev-Summit was held in the time when new Iran Nuclear Deal with US efforts reached at a certain point. In response, Israel showed its concerns along with other participants and Israel’s Foreign minister also said that “This new architecture, the shared capabilities we are building intimidates and deters our common enemies, first and foremost Iran and its proxies”. The establishment of regional framework and axis formed against Iran between Israel, U.S and four Sunni-Arab states may result in regional instability.

Aftermath of the Ukraine war highlighted the common goals of Arab-Israel ties; Arab leaders may seek Israel’s help over domestic tensions for high food prices. Because of ongoing conflict, Middle Eastern countries are suffering the most due to a spike in commodity prices. Much of the region can fall to food insecurity in view of its dependency over wheat exports from Ukraine and Russia. On the other hand, it is true that the Ukraine crisis has increased the significance of Middle East as it can work as an alternative to Russia’s oil and gas supply for Europe. Middle Eastern countries’ role will be of utmost importance in this situation as it will serve regional and national interests time ahead. In more than last 5 decades Palestine’s occupation remained a central point for Arab-Israel relations. But in the summit, there was not representation of Palestine. The entire normalization process has been a great disappointment for them as said by Palestine’s prime minister, “Unless the occupation ends, Arab normalization meetings are nothing but an illusion and free reward for Israel”. The future of the Palestinians appear to be becoming less important to Arab states than the menace of Iran and the prospects of improved trade and military ties with Israel. To conclude, Arab states must look at their growing ties with Israel while considering the Palestine question, regional peace and stability to avoid any conflicts particularly sect-based for long term prospects of Arab-Israel ties as well as to ensure prosperity of the Middle-East region.